cpu - i5 4690k
Motherboard - Asus Maximus VII
Case - M925
Ram - Corsair Veng. 4gb x 2 DDR3
Memory - WD 1TB HDD & Intel 120GB SSD
Power supply - Corsair 600w
ONLY the motherboard lights up with nothing else spinning or making noise of any kind. ALL parts were bought brand new not used.
I'm thinking 600w isn't enough to power everything the case (M925) has 3 fans alone along with stand i5 CPU cooler that came with the CPU.
Any ideas? I was so bummed I thought I had everything down :/

I'm thinking 600w isn't enough to power everything the case

unless you have TWO graphics cards, it is entirely capable. What is your GPU config? If you just have a 4690k running iGPU you could scrape by with 200 watts.

if you aren't trying to use like 2 390s it shouldn't have any issues.

if you only have one your PSU shouldn't be the problem

the motherboard lights up

on my ASUS m5a99fx pro r2.0 a red light means somethings is f'ed up. When you see a red light see if there is text on the pcb saying what it is GPU, BOOT, CPU etc

normal operation there is just a single green light

Well the only thing that lights up is is "Start" button it's big and red and the edges of the motherboard laminate red likes it breathing everything I bought was new :/ this is upsetting

Well the only thing that lights up is is "Start" button it's big and red and the edges of the motherboard laminate red likes it breathing everything I bought was new :/ this is upsetting

It doesn't show any codes

Is there a beep at all or a small speaker that came with the motherboard. This is the POST* code you are looking for.

*Power On Self Test I think. It is the check at start up for problems or errors at boot. Some some motherboards have a small speaker (looks almost like a capacitor) on the bottom of the board, or other ones include an attachable one so you don't always have to have a beep at start if you font like it. The beeps are at specific times and periods of time. These beep equate to an error code. Old school stuff but it is reliable.

It doesn't show any codes

Are you sure you plugged your power button cable into the correct pins? Have you tried pressing the "start" button directly on the motherboard? If you've done this and the cpu fan isn't spinning, double check both ends of your motherboard cables (24 pin and 8 pin) as suggested earlier by streetguru and verify that the cpu fan cable is plugged into the "cpu fan" header.

I ran my parts through a ASUS power supply calculator and it gave me 650 so maybe the problem is my low 600w supply only being able to power the motherboard... 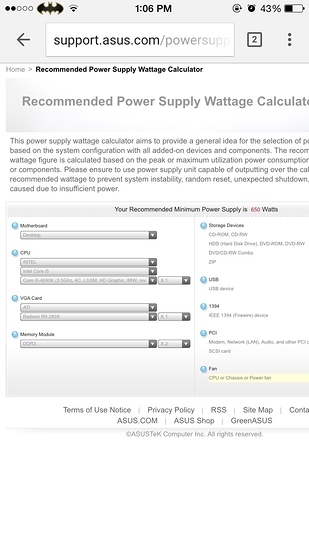 Also make sure the cpu cooler fan is plugged I to the correct fan header, that will also cause most boards not to boot.

If this does not work give us a picture of the mother board so we can see if something is hooked up wrong.

It is possible you may have bent a socket pin, I have done it before just by putting the cpu in the socket.