Hey, got drafted for tech help and it has me stuck.

My brother asks for help connecting to the interent, the ethernet stopped working and he resorted to WiFi and it was too slow. I go and disable the Wifi so I can check if the ethernet comes back alive and now neither work. No connection at all.

The ethernet adaptor is named Ethernet 2 for some reason and there is no 1. It is always an unidentified public network with no ip address and no way to fix it apparently.

The wifi just will not connect at all any more, either with the WPS or the password. No idea why or what is wrong there.

Further things like Device Manager or Powershell (admin) or any admin thing for that matter will not open. The user account is for the Admin group but they just don’t even launch.

I asked what was downloaded recently and got Nothing as the answer. so it could be anything. There are no restore points and it cannot go back a version, Reset looks like the only option.

I am not an expert, but I will take a crack at this.

If I understand correctly, you mentioned that the PC in question is not showing and IP address. Lets double check a few things.

If the PC has an IP address, and the ping of 127.0.0.1 (localhost) is successful, there is likely an issue with the router or modem.

Thank you. I will check this tomorrow and get back to you with the findings.

this sounds quite suspicious as possibly a hijacked system!
kakworm virus can do this. (while normal operations of the pc will work networking wont and neither will admin access)
since there is no restore point running rebuild may be the only option.

but disabling eth configurations is an admin function same as creating one.
and if an untrained person changes the admin permissions to none by mistake then this can also happen.

these may or may not be whats going on but something that could have happened.

Well, at least it’s definitely not government spying! How preposterous! Who could even suggest such a silly idea?

can you see CPU usage? scan with anti virus?

like others have said the network details would help

Did the IPConfig/all and the ping. Got this as a result. 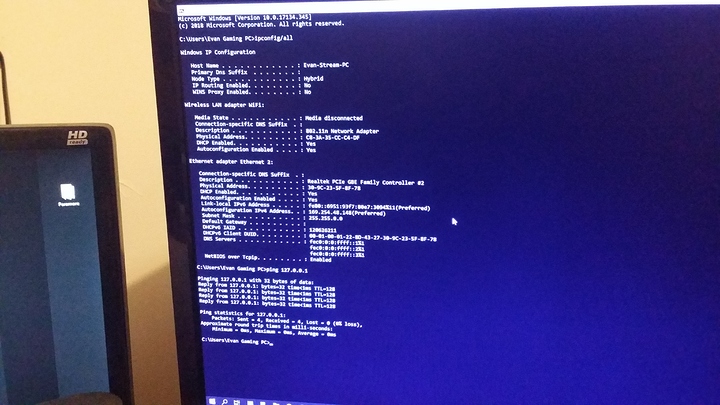 CPU usage is zero or usually background noise and blips. Same with GPU, WiFi reads disconnected and Ethernet is at zero in and out. @kenkoda

Are you running a router between this PC and your modem, or is your PC connected directly to the modem? The reason I ask is that an IP address of 169.254.xxx.xxx is not a local IP address, and also the lack of and IP address listed for the default gateway makes me suspect that this is your configuration.

Judging by the DNS results, it.looks like IPV6 is also being used. However, I know literally nothing about IPV6 perhaps @Dexter_Kane or @DeusQain can provide some insight here.

The fact you can ping local host means the IPV4 in windows should be running fine.

At this point I am suspecting some issues either with IPV6 causing problems, or some issue with your router/modem configuration.

Some things you can try in the meantime are a few more pings. This will tell us if you can reach anything on the internet, and if DNS is working.

Try “ping 8.8.8.8”
This will ping googles DNS server and will tell us if you can reach something on the internet.

Next try “ping www.google.com”
This will tell us the same as above, in addition, it will tell us if DNS is functioning.

If both of these ping commands are successful, like they were when you pinged localhost, open a web browser and see if you can get to www.google.com.

This issue may be more complicated, but this is more information for us to work with.

“Transmission failed. General failure.” For the Google DNS ping. And it could not find host Google.com

Your DHCP server isn’t handing out IP addresses anymore. Need to check that out.

I suggest re-booting the router. How many devices exist on this network?

This , plus also have seen Windows update clobber realtek drivers and you have to maual reinstall from a USB stick.

Other than dhcp could be tcp stack/virus…

Which is odd. Is DNS known to fail at endpoint? Because every other Ethernet and WiFi device in the house is fine. There are two.other ether net devices, my PC and a phone, as for WiFi at least 8 but usually pretty even around there.

Gave it a total reboot before I went out.today but have not checked yet if it did anything. Virus scan was still running when I left too.

@wendell yeah it is realtek I had thought win10 updates could have done something but did not want to jump to accusations.

Okay, virus scan did its thing but did not change the situation.

Network reboot did nothing.

Reinstalling the realtek drivers also did nothing.

Grab realtek drivers from Mobo web page, even if older? Be sure version # and driver date change on reinstall?

That’s the ones I got.

But progress. We have narrowed the problem down to the powerline Ethernet extender. The PC works connected direct to the router with all cables tested. But when we tried the extenders with my PC same problem.

So sorry for the goose chase. Now we just need a long cable.

DNS isn’t the issue.
Everything I made my assessment on is in your photo.

Your IP Address is an auto assigned address when you don’t get a DHCP address.
You have no gateway.

If other devices on the network are working correctly, I would rule out all other possibilities before blaming the system. (I’m a network guy, I rule out the network devices)

The fact that WiFi AND wired don’t work, likely means it’s the system, but it’s not a terrible idea to eliminate the router completely.
Check cables.
Make sure nobody has played with the allow/block lists on the router for MAC addresses.

If you statically assign an IP address to your wired device does it work?
You would need an address that isn’t in use and assign it to this system.
Add gateway, and DNS servers.

It would prove that the drivers are working, but some reason it is not getting or acting on a DHCP response.

… or look for a factory reset button on the modem/router , and if you had any settings like wifi network name/password, just set them up again

Looks like I got it. Thanks for all the help guys. Bad connection for the Ethernet cable… WiFi is still a mystery but we are on wired so not a concern right now.