so anybody have a suggestion for which ups to get? this will be for home use powering a gaming rig and a few monitors for now and in the future some pro audio equipment. i’m looking for a line-interactive or online around the 1000/1440/1500 va range. been looking at cyber power and apc and eaton (which i really want but its $150 more) and could use help narrowing down my choices. oh and rack mount would be nice but i’m not opposed to a tower either.

First thing first: if your PC’s PSU has APFC you need to go with a pure sine wave unit to ensure that you don’t damage your PSU on the long run. Short explaination: AFPC is active power factor correction and basically smooths out the power that gets into the system. It’s made to smooth out sine waves (that’s how current is delivered to houses and apartments) so if the UPS you hook up to it has a square wave the PSU might “interpret” it wrong and not run as it should.

Second really important thing: VA it’s not an accurate measure of the output power of a UPS. You need to know what’s the output of the UPS in watts because not all the UPSs are made equal. Some have a power factor that’s higher than others or vice versa.

After you’ve taken these two major things into account it’s just “basic” things like reading reviews, checking reliability, maybe if they have some kind of warranty if they fail and take out some of your gear, battery capacity, features you’re looking for etc.

For a whole home UPS… you cant beat a Tesla powerwall.

yeah i’ve spend the better part of this year trying to find reviews about any ups. most i can find is a handful of reviews on any rackmount ups other than a few discontinued models on amazon. on top of that nothing in-depth like a johnnyguru psu review where they measure output ripple and all that stuff, load voltage, etc… i’m half tempted to start buying o-scopes and multimeters just to do my own reviews but i dont have that much disposable income as i doubt i could get anybody to send me a new ups to “test”.

yeah thats not a pure sine wave model and running a pc is the main reason i want a ups. 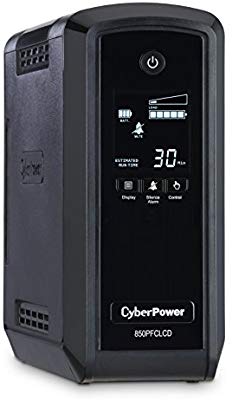 I’ve had the same issue when I was choosing mine. In the end I just went for one that looked good to me and, so far (~5 years), I’ve been really happy with it. My unit is a Powerwalker VI1000. I don’t know if that company sells in the US but I really liked their product.

I remember reading about previous models of “pure sine wave” UPS sold by CyberPower which actually were sawtooth waves. According to the reviews, this one is actually a pure sine wave, thankfully. https://www.amazon.com/product-reviews/B00429N18S/ref=cm_cr_arp_d_viewopt_kywd?pageNumber=1&filterByKeyword=oscilloscope

I have two in the house. Mine run off of Lead Acid batteries and they are heavy. I believe the updated version now uses li-poly batteries.

I have two in the house. Mine run off of Lead Acid batteries and they are heavy. I believe the updated version now uses li-poly batteries.

that is the one non-rackmount ups i have been eyeing because it seems to have favourable reviews. does it have any interesting quirks or annoying features?

Nothing major to report. It will do a diagnostic test once a month if it has not failed over already and you can hear the relay click over. Does this for 30 seconds to 1 minute.

The only major thing is that this UPS is heavy. I have not use the slim UPS line from APC. For the home, it may be better due to size and weight.

Look for surplus rackmount Easton or Powerware 9000-series units if you can get them shipped without batteries.

Line-interactive units are crap. If the batteries fail they provide no surge suppression and will just let a transient through.

If you must go New the Cyber Power sine wave series are better values than the APC units but can be difficult to source locally to save on shipping.

I stopped buying the APC back ups series after several inverter failures after 2 - 3 years and their newer units use battery modules so you can’t just go to a local battery store for replacements.

My favourite and longest in service UPSes are 3 700VA PowerWare 9125 units that I got for free as Work was throwing them out. Had to put new batteries in them at $50 a pop and one needed 2 capacitors replaced on the high side of the inverter for $5 so I did all three replacing the 80mm ball-beating fans with Noctua while I had them open.