I builded my new pc few days ago but i have a problem.. I have a asrock b85m pro4 and the case is the k350 and the case comes with a front fan that i cant connect i dont know why.. Can someone give me some tips ?

Here's the fan headers I could spot in a moment's notice on your motherboard: 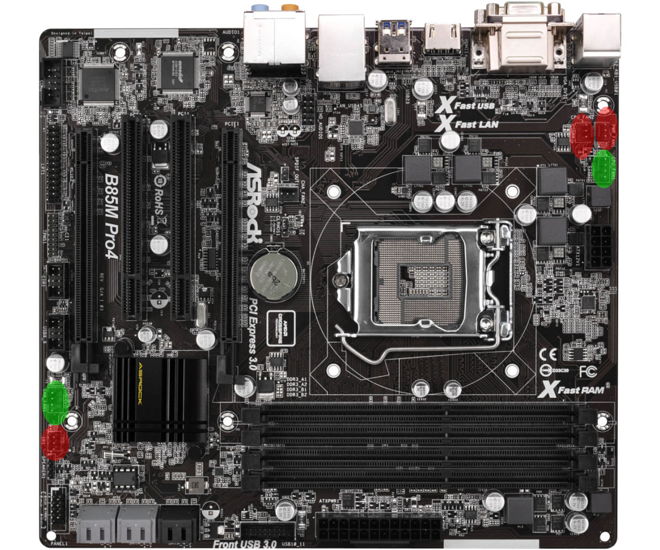 If the fan's wire thing (pffft can't think of an appropriate word here) looks like this:

*
...stick it into one of the headers on the motherboard circled green. there's two plastic fins/a guide as you can see on the top of the wire pictured above that lines up with a tab on the motherboard's fan header, make sure they line up.

I got two likes over circling some bloody fan headers @Stone @TheRabidTech did I just have a really funny brainfart or something? lol

lol, you clearly answered the question and used some nice clear pictures to make it nice and abundantly clear.
I like that :)

you did good kid.

also probably the best reply i have sceen for a fan header question, ever.

you really pounced on this thead.

Thanks for the great reply but.. Im still having problems.. The fan comes with like some weird adapters.. I can take them off and use the 3 pin but the cable is rlly short.. I conected the 3 pin to that red circle that u put.. The ir1 , but nothing..

Well, it's a fan header for sure. There's one fan header I didn't circle, it's horizontal in the image I provided above, just up and to the left of the CPU socket, it's annotated on the motherboard as "CPU_FAN2" I think, you might be able to reach to there if you haven't used it for your CPU cooler already.

Try taking the fan out of the case and using different headers. Might have to turn it off and on again after plugging it in to get it to spin up. Either that or it might be disabled in your BIOS or something. Try some other fans if it still doesn't work, perhaps (your stock cooler should do, just don't go unplugging it and plugging it back in again elsewhere while your PC's running). If that works your fan might be DOA, and if your CPU cooler doesn't work either then the motherboard's probably to blame.

If it is, that plugs straight into a molex cable from your PSU. You can power the fan that way if you so wish, just note it'll run the fan at full speed at all times (you won't be able to control the fan speed through your BIOS etc.).

Yeah i think its one of those molex.. I tryed to conect to the PSU but was having probs só i thought it didnt fit.. Will try tommorow again :D , thanks!

Thanks everyone its working now
I read the manual but the 3 pin didnt reach to the places i needed and the molex i tryed it to connect to the psu but i didnt want to break nothing so i didnt do much pressure.. But once again THANKS :D