Need help! My GPU isn't performing according to its specs

My HIS R9 280X iPower IceQx2 Turbo Boost Clock GPU isn't at the right clock speed during idle or when I'm not gaming. This happened after when I went to much with my overclock, around 1200mhz core and 1700mhz memory, then it crashed. I set everything back to default but still it's not at the right clock speed during idle. I tried re-installing the up to date drivers, but still nothing happened. I'm worried about this since my idle temps used to be around 34 Celsius (93.2 Fahrenheit) to 39 Celsius (102.2 Fahrenheit), now it idles at temps of 52 Celsius (125.6 Fahrenheit)! Do you know other options to fix this, guys? 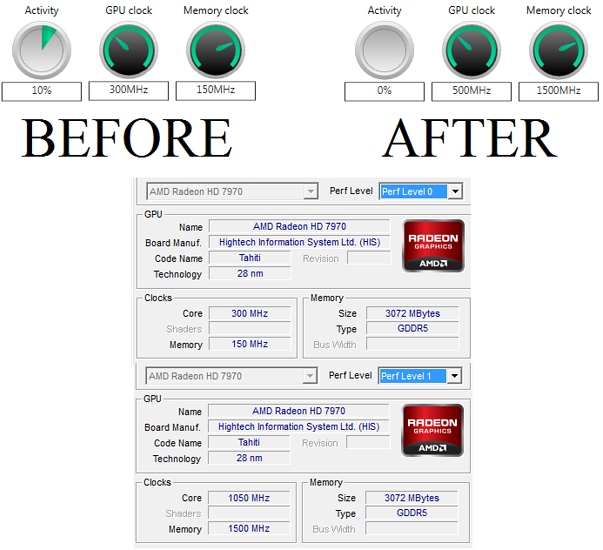 I definitely am not super educated on this but... could the crash result in the bios being corrupted? I definitely don't really know, but it was just the first thing that sprung to mind.

There is nothing wrong with your gpu, all new amd gpus downclock when it's not being taxed to save power

At least from my understanding, what he's saying is that his card used to idle at 300/150 (like my 7950) and then after a crash during extreme overclocking it now idles at 500/1500. Might be wrong though.

Okay this is going to be quite a novel but ill do my best.

First of all DO NOT USE AMD OVERDRIVE.

I suggest you uninstall your drivers and install 13.12 WHQL, most solid and stable drivers i have used so far. It doesnt support mantle amongst other things but it hasnt limited me so far. To uninstall drivers just use the uninstaller, dont use any of that Driver remover software, they leave a lot of shit in your reg.

If you dont want to roll back drivers (I recommend it though) do this. In AMD Catalyst Control Center: Go to preferences, then to reset factory defaults as shown in these pics:

Okay now that you've reseted the drivers or installed the 13.12 WHQL, download MSIAB (remember to install rivatuner statistics server, comes with the installer)  And go into settings on MSIAB. From there you go to the bottom and under unofficial overclocking mode you choose without PowerPlay support and Reset Display mode on applying unofficial OC. and unlock voltage control ofcourse.

Restart MSI or the PC, MSIAB will specify accordingly.

Now its time to make the profiles. Make your OC profile on the card, wouldnt go over 1.25v on air simply because it could be loud, cards dont die that easily dont let anyone tell you otherwise. Save this overclocked to profile 5. Click reset, and save reseted clocks to profile 1.

Go into settings and on the top tab go all the way to the right, you should see "Profiles" and put your overclocked profile under 3D Profile, and the reseted one under 2D.

Your card will now ONLY initiate 3d clocks if anything triggers it, its usually games. But i found that spotify, origin and a few other things do it to. This is where Statistics server comes in.

If your card is running 3d clocks on desktop you can find out whats causing it by clicking here:

Now that you know whats up you open rivatuner statistics server. Click the large + sign on the far bottom left corner of the screen. Browse to your program thats activating 3d clocks. And when you've added it to the list you click it and change "Application Detection Level" to NONE. This will make MSI AB ignore it and it should return to 2d clocks unless something else is triggering it in that case you'd have to redo what i just told you.

Any questions feel free to ask or add me on steam.

And yes, multiple monitors will cause your card to run at full volts all the time.

It crashed as a result of being an unstable overclock, not because the bios is corrupted. And it doesnt harm the card at all.

And even if the bios was corrupted, he has a bios switch and be able to switch bios.

Thank you very much for the help! I have not been able to return my GPU back to it's normal idle state of 300/150 mhz after intalling 13.12 AMD drivers, but I'm happy that you taught me how to use MSI afterburner, it's really neat! I wasn't able to find that large plus sign anywhere on the far bottom left corner of the screen of the MSI afterburner. Again, thank you very much for the help!

I'm only running one monitor. :)

Oh, I didn't clearly read that part. Thanks!

2014-08-07I fixed it! All I needed to do was erase EVERYTHING from my boot drive (SSD) and reinstall Windows. I think a malware was causing it, probably a bit-coin mining virus.

Doubt it, probably some borked drivers or reg stuff