So I am going to make a custom PC for both me and my friend (I am designing it and we are both buying identical PC's), I would like some advice on how I should tweak my current build.

Here is the build on PC part picker:
http://pcpartpicker.com/p/pXgTsY

So we are both wanting to play GTA with mods. I looked at the recommended specs of GTA V, and basically just beefed up what the reccomended specs were.

The problem is we were hoping to spend closer to about $800-850ish, at the moment the build is $987. What do you guys think I should change to make the cost go down, but still be able to play GTA V with some mods with no problem. I was thinking of maybe getting less powerful of a CPU because the benchmark scores on the one I chose were about double the benchmark scores of the CPU that rockstar recommends to use to play.

I was also looking for what video card I should get, the one I picked out came out to $400 and I feel like I am paying too much for it.

One last thing. Is there a way to get Windows 10 for cheap? I do not want to illegally download it, but I feel like there is a better deal out there that I am not aware of.

Thanks for any and all recommendations that anyone may offer.

cant see your build you need to use perma link

Yea I found one on Amazon that I liked. Also the build you gave me should run GTA V with mods fine right?

It should run pretty well although my other recommendation is if you can wait a few months the new line of gpu should be coming out and you might have more options.

Thanks I like your build. Do you know where I can buy an operating system? Perferably Windows 10, I noticed it is pretty expensive for the ones on PC Part picker, is there anywhere online that I can buy for cheaper?

Oh yeah I forgot one last thing, will this case fit everything fine? I saw it on Amazon a few weeks ago and I really liked it 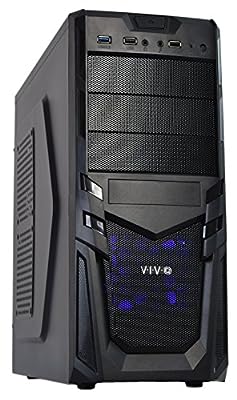 Brand new ATX Mid-Tower PC case (CASE-V01) from VIVO. Designed for gamers, this performance case offers a variety of features including excellent air flow and cooling, an abundance of expansion, 3.0 U ...

windows 10 keys are that price unless its a bulk OEM key. and i'd trust shadows build with his case over that one. i'm not too fond of cheep off brands that we don't really know about. especially a top PSU mounted case...

Here's a new PCP list for you. You mentioned wanting to get the price down, so I rebuilt the list around price-to-performace, staying just under that $850 you've mentioned.

Now, a note about your OS. We've had some trouble here on the forum with scammers, so people are a bit paranoid and there are some new rules. However... you don't have to go the Microsoft route. I can't link you to a reseller or offer to sell you a copy, if I recall the rule. But I think I can, and will suggest, that you go seeking out a seller on your own. Be careful, of course. Check reviews, etc. I will say that I personally am running and have been running for a very long time now, a 3rd-party-sold Windows key.

I revisited your build and came up with this one: http://pcpartpicker.com/p/TVvWVn
I took out the K processor, put in a way better motherboard, removed the SSD and the optical drive but used a better power supply and a CPU cooler since with the stock cooler you'll get a really loud and barely cooled CPU. Also swapped the GTX 970 for an R9 390 which is better all around. With no frills like the SSD and the optical drive this is a better overall system for 826$. Let me know what you think about it and I hope I've been helpful!

I'd look for the Xeon E3-1231v3 instead of the i7 4790 but I don't know if it's cheaper in the US. I also would consider buying a 250GB SSD first and add a HDD later on if its space isn't needed immediately.