Anyone here got their hands on a first production sample of the NCASE M1? Share your build and give comment, credit, feedback to others! Elite m-ITX owners rejoice!!! 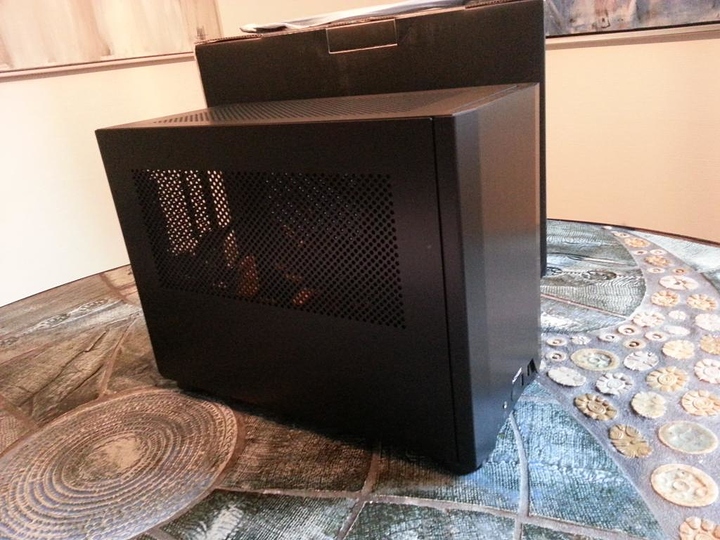 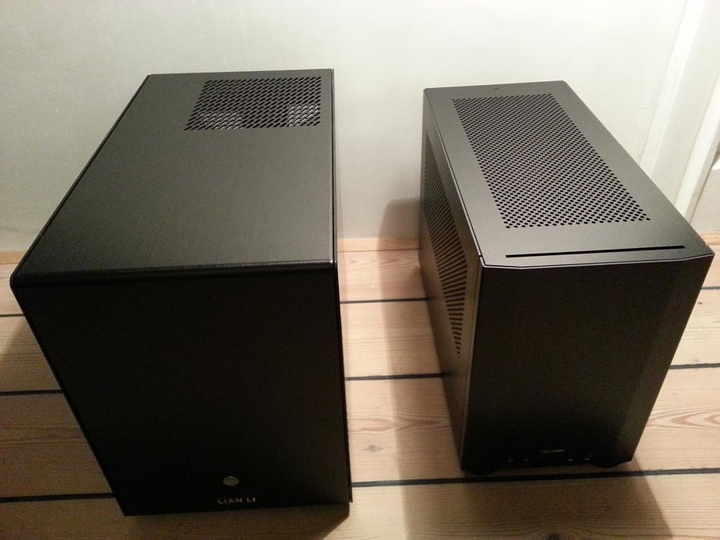 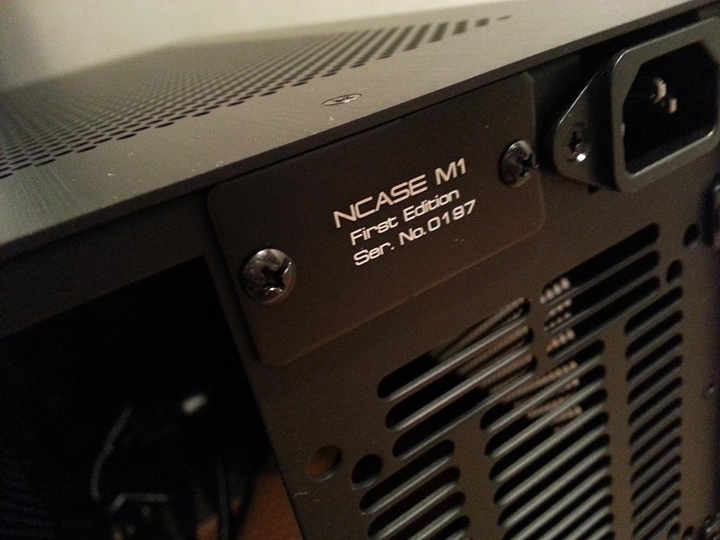 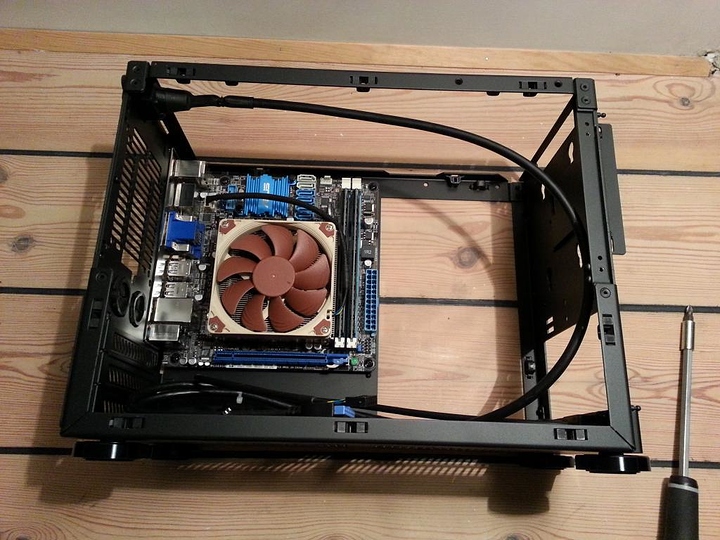 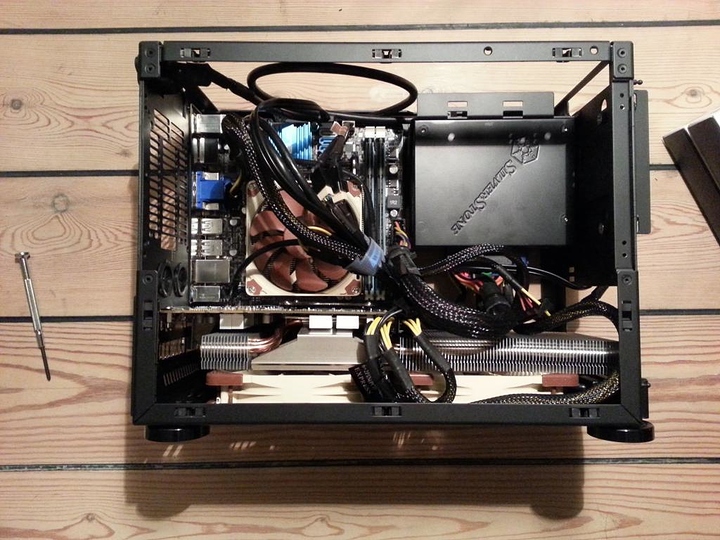 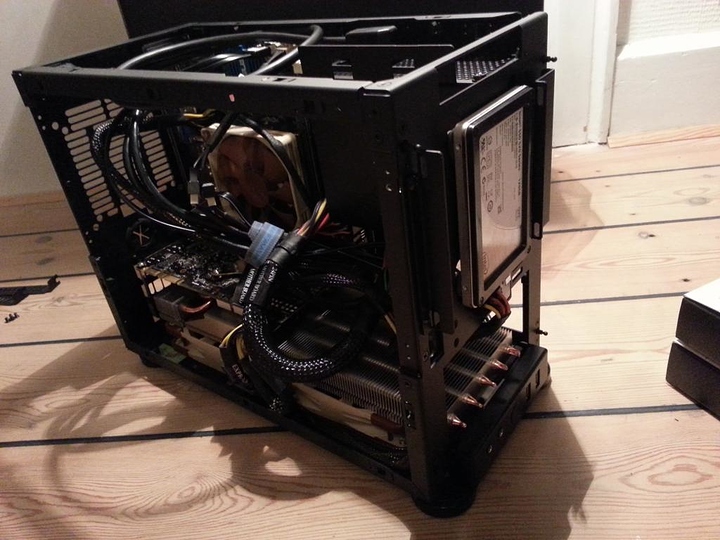 Wouldnt even hold my gpus. No way.

The airflow in that case looks non-existent..

Yes, its a different case. My biggest problem with it is no cable management.

There's a lot of ventilation options with this chassis and airflow goes from intake bottom and sidepanel to passive top and PSU exhaust. It's full of features and flexibility -> you can use it like a quiet HTPC or an extreme LAN-gaming rig with watercooling. There's no need for modding since the design has been thought through by the community of [H]ard|Forum :)

Like it or not - I love it! And I'm far from done with my build. Any advice and/or feedback is highly appreciated!

Whats that warp in your graphics card gonna do to it. Probably want to shim that up. Take that whole mb mount and invert it . It would be alot more effective. Think i would like that case if the mounting for mb was reversed and the top was like the bottom.

The temperatures are looking pretty darn good. Much better than the LL PC-Q25 :)

I will see if I can find some sleeved Silverstone cables. It will give the build a cleaner look to it.

Am still looking for a store in Belgium that's close to me, but they are hard to find.

I'll get the parts for my build from Amazon arround Friday I think. I totally agree with Phantom and brennanriddell about that airflow, so I'm gonna make a build with a Swiftech H220 as shown on Hardforum.com. The H220 is easy to mod, so I got a cheap waterblock for the GPU too. I'm going to use a Gainward GTX 580 Phantom I have laying arround. I hope that old thing isn't going to make things too hot. I'll deffinately post some brag-pictures once I start building.

The H220 setup is the most optimal CPU cooling solution, indeed. My H220 was sent back yesterday for RMA due to an airbubble in the pump. Just keep in mind that you will need an SFX PSU in order to even fit the H220.

You may also keep in mind that the SilverStone PSUs are f*cking loud.

I am worried about that PSU man. Searched high and wide, but the Silverstone ST45SF-G is the only one there is. No alternatives :( I hope that 450 watt will do. A 500 or 550 watt would so ease my mind.

BTW if you know of anybody that has an extra no-ODD cover lying arround, let me know. Forgot to order one :(

This thread makes me cry, i found out about this case too late to order it :(

BEAUTIFUL! Have fun with it :D

Great builds. I have my M1 standing in the corner of my room but still need a new cpu cooler and PSU to migrate my components from my node 304. I am scared that I will lose the near silence of my node though with its noctua NH-D14 cooler and silent PSU. The silverstone is notorious for being noisy in idle. Under load I don't really care.

Hello everyone! Thought I'd share my NCASE M1 build! Serial #228.

Recently upgraded the CPU to Intel's new i7 4790k and added some of Demciflex's magnetic dust filters. The temps are reasonable, but they're a little on the high side right now due to the weather here in southern California. I had a Corsair H100i in here, but I took it out because I wanted the extra storage. I plan to have a custom waterloop and I would love to replace the mechanical hard drives with SSDs once larger/cheaper drives come out.

Overall, I absolutely love this case, and I can't wait for my silver Rev. 2 to come in so I can build a media/steambox streaming PC. =P

Hey guys, just so you know NCase is going to be releasing V3 for pre-order very soon. Like Wednesday soon, they said on their FB page.

I was wondering, can one of you guys make a video showing the airflow of this case or link me to a place that knows about it? I YouTube'd vids, none provided adequate overview. With their thread on hardforum, I don't want to look through thousands of post, lol.

those are some nice cases and builds but I am partial to the compact splash.

How much did that case run you guys if you don't mind me asking?