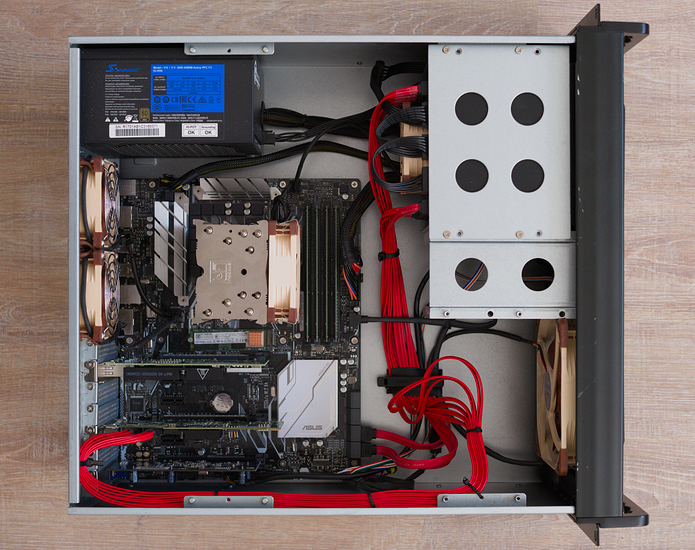 Here is the full spec list for the build:

Looks good to me.

Pics or it didn’t happen!

Awesome!
Since you’re using ECC ram do you have any idea what’s the fastest ECC ram?

Pics or it didn’t happen!

It didn’t … yet.
And there will be pictures.

Since you’re using ECC ram do you have any idea what’s the fastest ECC ram?

No, sorry. I opted for a somewhat conservative speed of 2400MHz. I just wanted it to work as reliable as possible and that also means not stressing the memory controller / infinity fabric too much in my opinion. I am running 32GB (4x8) of that stuff and it is rock-solid.

Thanks I’m asking since I want to upgrade my home server in the future.

How many SSDs are you going to be running?

As far as I know the APUs don’t do ECC.

So far it seems board makers aren’t supporting ECC on Raven Ridge parts outside of the Pro models though, and those are nowhere to be found either.

Edit: dammit @noenken beat me to it

But IF they can be bothered to do low power APUs maaaybe they can make som low power ordinary Ryzen? And yeah, the Pro parts look nice, but nowhere to actually buy them. I kinda hate that, paper products etc. We’ll see I guess.

How many SSDs are you going to be running?

Probably only 4 x 2TB for now. The box will be able to hold up to 12 SATA SSDs.
It will be running FreeNAS I guess because ZFS on linux doesn’t seem to support TRIM yet.
And the OS will be stored on a 128GB NVME Intel 600P, I don’t trust USB-sticks.

It is gonna have an LSI controller for 8 of the SATA ports, the other 4 are gonna be onboard.
Gonna also put a supercheap VGA card in there that draws like 2W and the Asus 10Gbe card.

So far it seems board makers aren’t supporting ECC on Raven Ridge parts outside of the Pro models though, and those are nowhere to be found either.

You might be right that it is more a mainboard thing though.

Yeah, sure. That seems reasonable.
You first.

I’m actually looking forward to the low power stuff.
I want my router to not be Intel anymore …

I think it makes sense to rename this now and make the build itself the topic.

Yeah, sure. That seems reasonable.

Then how do you propose to actually test if you have error correction? Wait and see if the data on your ZFS array gets corrupted? I’ve ran into this brick wall before several times, how to test if it is actually working.

I want my router to not be Intel anymore …

Yeah me too. Besides mine is getting old (no AES).

Then how do you propose to actually test if you have error correction?

By not burning it.

I mean, what temps are we talking here? Would a hair dryer do it?
Also, first post has my idea of how to check.

You might want to wait for the R3 CPUs to be released. The current R3 1200 idles pretty low, and I bet it can be undervolted and maybe slightly underclocked to be really frugal on power.

In the meantime, get the rest of the rig ready. Get the most efficient PSU you can afford. Research it well. I would recommend a PSU that doesn’t stop it’s fan at all.

I will add a crossbar so I can ziptie-dangle a 140mm right over the cards. The Intel dual 10Gbe absolutely needs active airflow and the LSI controller probably won’t complain either. The GPU is actually a 2W TDP PCIe 1x piece of crap but it should be enough to install and manage FreeNAS to the point where I can do stuff from the web-UI.

Last thing missing are the drives and my wallet is not really looking forward to that…
But first I’m gonna test the box with two 500GB MX300 that I have around.

Hey @wendell: Do you think the Ryzen 3 1200 is enough for a SATA SSD 10Gbe box like this?
I’m not transcoding on here or anything, it just has to deal with transfers and ZFS overhead.

I’m not transcoding on here or anything, it just has to deal with transfers and ZFS overhead.

You won’t likely be able to get 10g speeds over ssh, but for cifs/nfs, absolutely.

consider dumping the video card and running a 2200g?

i don’t think you’ll have cpu issues in this box personally. typically storage boxes end up running out of io. which is why epyc is so… epyc.