I’m in a dilemma yet again regarding a NAS. I have been considering what to do for one for about a year now. Over the past weeks I have been back and forth between Synology vs DIY. Synology is reputable from everything I have heard and read, albeit somewhat limited power wise depending if I decided to go for a DS418(ish) level system. On the other hand I have been considering building one myself.

DIY wise, I have been looking at guides that suggest used server/workstation hardware such as a Supermicro X8SIL with a Xeon x3470.

All things considered. I do not mind some “tinkering” if you will, but am concerned that this tinkering may actually unintentionally cause me to lose all of my data or part of it if I mess up. I think for the coming years I would not need more than 4 drives, especially considering the size available these days. And price wise I wouldn’t want to go more than $400ish not including drives.

Any experience with one or the other, feedback on reliability of your systems, or advice from your own past mistakes would be appreciated. Thanks.

I’m going to tell you something you already know. Something that gets repeated more often that it should.

Back up your data

You should have a plan for this before you even think about putting data on it.

Now thats out of the way… What do you want your NAS to actually do? Just serve files? Do fancy tricks with plex? Virtualization?

I recently moved from synology to a freenas box and while freenas has been a learning experience, its extremely robust and can do a lot of tricks my synology cant. A DIY solution is only going to be as reliable as the components you use with it.

I’m gonna shill my self here

Hey guys, Welcome to my little corner of the forum. I plan on using this thread to share my projects, thoughts, ideas, etc. Anything I think someone might be interested in. To get us started I’ve recently begun a NAS project. This is “MiniNAS”, a Synology ds216j. For a few years now it has faithfully served my file serving needs. Here she is naked. [IMG_20190326_074656] Those drives you see there are a couple of WD 8tb drives shucked from their easystore prison. A damn good deal for $130 IMO. Before I only had a 4tb HGST and toshiba in there and it was starting to get a little cramped. so what, you swapped the drives in your nas? big deal Well, now that I have the extra 4tb drives (I have one in my desktop that I use for games) I can start thinking about actually having a backup of my data somewhere. Enter the project… I dont have a name for it yet, got any ideas? [IMG_20190401_193715] [IMG_20190401_193723] [image] So a total of 4x4tb drives 16GB DDR3 1600 Haswell i3 Are you picking up what I’m putting down? FreeNAS I’ve never really done anything with freenas and only have a very basic understanding of it. I hope to eventually migrate all my data to a 4 drive raidz2 setup and use the synology as a backup of it, perhaps offsite. As the build progresses I will try to detail my trials and tribulations. Thoughts, questions, concerns welcome. EDIT0: Freenas wouldnt even install to those 8gb drives and come to find out, you actually want 16gb drives. Never even knew.

Theres been some power issues with some synology boxes but I think those issues are blown out of proportion and again… backups. I’m happy to answer any questions you have about both.

Thank you for the info. To start, I always remember backup…in the back of my head. Admittedly I had not put thought into it yet, but am now.

I should have been more specific with my use case.

First and foremost is serve files. I have been collecting various media (movies, tv, books, music, etc) and need a central place to store it all.

Second, be the brain of my plex operation. At most 2-3 people will be accessing it at one time, but most often just 1 person. It will begin to serve more 4k content as it becomes available.

Third, this is required, but it would eventually be nice to access it while on the go, but this is not a deal breaker.

More and more I am torn at which to use. At first I was sold on Synology, and then I was swayed to DIY. Now it just seems there are pros and cons to each and I just havent decided yet.

First and foremost is serve files.

Serving files is a no brainer for both options… until you start to hit the limit of 1gbps… which is fairly easy to do with either option. If you want 10gb, DIY starts to make a lot of sense.

ZFS has nice features to protect against data corruption which is nice in the long term. I’m not sure it matters as much for the home gamer, but some think otherwise.

Second, be the brain of my plex operation. At most 2-3 people will be accessing it at one time, but most often just 1 person. It will begin to serve more 4k content as it becomes available.

That xeon isnt doing you any favors there either. It will work but a modern intel desktop cpu would too and use much less power doing it because of its hardware encoding.

You dont have to have transcoding, but:

synology already does this pretty well with their internal web server

on the freenas side you have nextcloud and plex plugins. both of those are better on their own than what synology does, but require ‘setup’.

To me, the synology is for someone who just wants network storage, and thats all it needs to do. It does have some tricks up its sleeve, but the hardware really limits it. It does do one thing really well, and thats get you set up easily, and just working™.

FreeNAS is a bit of a bear and I cant say that I’m really digging it either. FreeNAS and ZFS have some ‘quirks’ that a synology box, frankly, just doesnt. It does have some powerful things in its favor and those can make it worth while.

I think an ideal balance would be a roll your own linux server running whatever you choose, but this comes with its own drawback of there being a fuck ton of ways to accomplish what you want and none of them being remarkably better than the other.

I think im firmly in the DIY camp now after having owned a DS216j but I’m not sold on FreeNAS entirely.

If you want to run Plex media server and transcode video from the NAS, you’ll need to pay out the nose for Synology.

I would suggest separating the two. Get a cheap DS418j or DS418 and serve Plex with an Nvidia ShieldTV or if you want to do more home server stuff a separate linux box, which you can find insanely cheaply on eBay. I personally bought one of these with 16GB RAM and a 256GB SSD for $300 last year. It’s very small and quite powerful for the size. 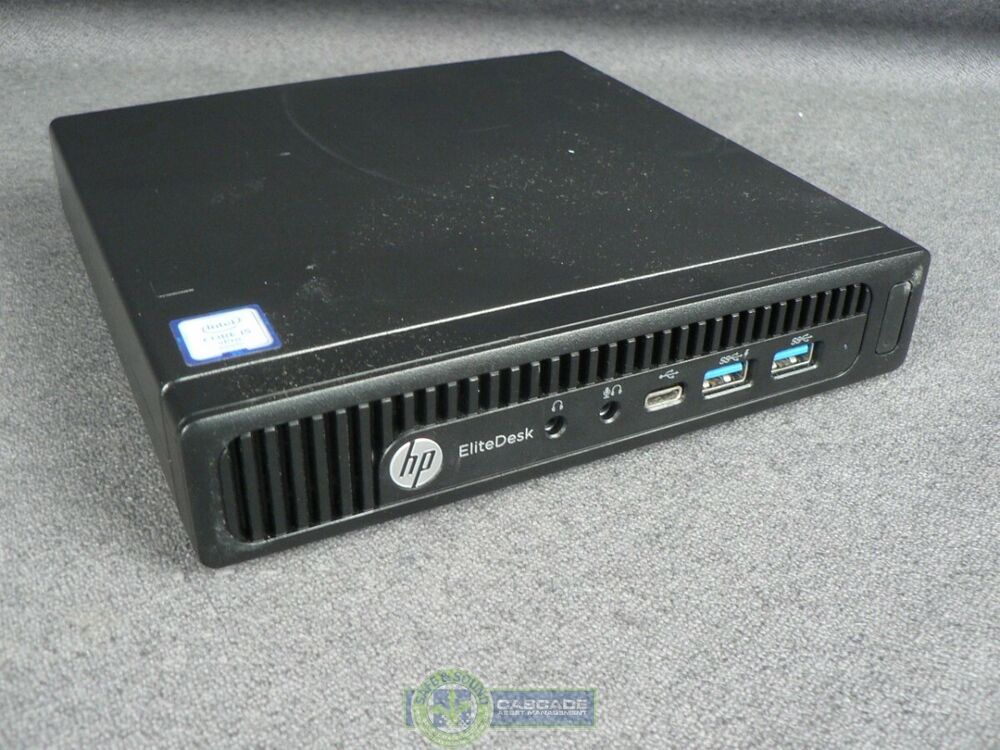 Up for sale is a used HP EliteDesk 800 G2 Mini PC. Unit has been tested and verified to be in good working order. Cascade’s sole responsibility is to replace or repair, at its option, any component that does not function as described.

I am sure that I have another system around that can be used at the Plex box for transcoding, its more the file server that I am concerned about in terms of setup and stability.

What are your thoughts on used server hardware versus a newer intel cpu for a server box though?

@Ruffalo
This isnt a bad idea either. Especially considering the ease of setting up synology and just running media off of another system. What are your experiences with the 418s?

I do not mind some “tinkering” if you will, but am concerned that this tinkering may actually unintentionally cause me to lose all of my data or part of it if I mess up.

I recommend that you tinker and have fun with it, learn things, and have multiple backups of anything you cannot lose. RAID is not a backup, not even with ZFS. The smartest thing you can do to prevent data loss is to keep physically separate backup copies.

If you want a flat nas as a pure file server, a cheap arm based NAS should be fine, I would recommend tinkering away from the NAS if data is that important.

If you want some extra oomph, a plus series NAS with an intel proc may be nice like the 1618+, my only issue with Synology is they are pricey for the kind of hardware in it. The bonus is at least their documentation for data recovery isn’t horrible and easy enough to follow along.

In the end, 2 bays in RAID1 should be more than plentiful.
Upgrading your capacity isn’t super difficult, I plan to turn my DS218+ from 2x4TB to 2x8TB sometime in the future and reuse the 2x4TB for daily PC backups.

EDIT: I misread somethings and thought you had a 2-bay to begin with, not adubs.

freenas works well, and zfs on bsd is very good at not losing data, and versioning it if you do something goofy

But what is this NAS for? Cheap soho type?
If you do not need multiple disks, zfs, and more like 1Gb / s, then Odroid HC2 + 12TB HDD and the other HC2 + HDD as backup.
Personally, I would prefer to invest in two large disks rather than a whole lot of smaller ones …

Server hardware is cool, but power hungry and not inexpensive unless it’s really old. I run my nas box with a haswell i3 which is more than overkill for a 1gb network.

I have a 413j and it works fine for file serving only.

Server hardware is cool, but power hungry and not inexpensive unless it’s really old

Because the truth is that for normal home use for smb, nfs, ftp to saturate 1Gb, just something like Odroid HC1 / HC2 and good HDD is enough. Exynos5422 will not even be too sweaty with this use.
Only in present times people treat NAS as a machine for everything. Typical serving of files up to 1Gb does not require anything special. Even such HC2 is able to do much more than just transmit data.
Hardly anyone needs a home server with 16 HDD and two cpu and 1.5TB RAM. I mean, not counting Wendell.

Having considered everyones input I am going to research more of the 918 range of NAS. They seem more powerful and the software is very convenient and well documented. If that doesnt work than I am going to go the i3 or xeon route and see what I can build and post it here.

That would certainly work fine, and the DS918+ has an atom CPU with quicksync so it will hardware transcode with Plex media server. You’re paying a couple hundred extra bucks which seems like a lot for an atom CPU, but it will do what you want.

This is what I mean by pricey, you are essentially paying a premium for the benefit of easy self support.