Hi all, I was hoping someone might be able to help me. I am trying to build a PC out of parts from a bunch of other PCs and I ran across a motherboard I can find almost nothing about online - certainly not useful information for me. I would like something that can handle modest gaming. Anyway, the motherboard is an IBM FRU PN 49P1599. It's clearly an ATX board but it has to be several years old. Should I try to get it running or spring for a $60 B150? Thanks!

when i look for that board im finding PGA 478 stuff, can you confirm the socket type?

a picture as well would be nice. 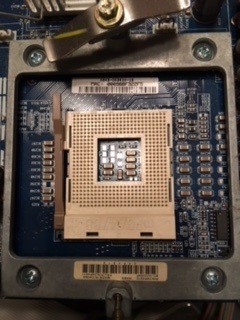 That's one of the problems - I am such a novice that I can't really tell. The chip I pulled off of it was probably a Pentium (had a heat sink and a fan) but I can't even tell what kind of chip it was anymore (can't read it) Here is a photo of the socket:

Is the board that old? Wow. It retails on Amazon for $100, but I realize that's not a good indicator of quality.

Yeah, that socket ran from 2000-2004. Old tech is sometimes expensive just because it's rare and the people that would actually need or want it would be willing to pay.

Okay thanks for the help guys - I think I'm going to recycle this board.

Thats a pentium 4 board. Hackers like to grab them for stuff and in what I am doing I'd love one, but if you're building a generic gamer or whatever you won't have much to play on it past 2007 I don't think.

Good that you are scrapping for parts though. Look around at local tech shops and see what you see in scrap :3

If it will take a 479 chip it might be worth playing around with. I loved my Pentium M chip.

That socket is very old, its pga 478 (came out in 2001 if memory serves me right). So i would say its not worth using for anything since you will only have support for single core cpus and ddr1 ram.

Edit: i thought that socket 478 was lga aswell.
But its pga yeah like socket 423.

You could get both. The later ones moved to 775 when Intel thought the Pentium D was a good idea.

Yep correct i was kinda wrong.

P4's are actually really nice if you let the microcode update come in on linux.

I happen to love Pentium 4's myself, but that doesn't change the fact that they run at the temperature of the sun lol

I still have a pentium4 extreme socket 775 1 core 2 threads.
But no those arent really great for gaming anymore nowdays.
Allthough i have to say that the performance of that single core,
isnt that much worse then FX8350´s single core performance.