My system is future proof! Or is it?

I want to build a system that is production good, and at the same time has some degree of "Game-o-bility". I am a photographer/video designer, operator, all those kinds of things.. (English is not my native, so pardon my mistakes). I mostly use Premiere (of course PS) but I utilize motly Open CL, and CUDA (My old DELL laptop is going down i think.. (SandyBrige i5 @3.2Ghz, 6Gb RAM clocked at INIMAGINABLE 1333, Nvidia 525 with a gig and 96 cuda cores)

Also, here is my supposed Intel and FX builds, just tell me how good/bad/resonable it is. I know that there are a lot of smart guys who can always built greater and better systems, but for now... budget wise.. stuck..

Also, Logan in one of reviews said that 8350 is not that bad, Its turned out to be almost always 34-50% slower, at producctivity, but I can deal with that I guess if Iam saving cash.

One last thing, I want to play DAAAT dam addicting crackV I mean gtaV on max settings at full hd. 290x just plows through like a buldozer (not the amd), and this is another reason why I originally choose red team. Anyways..

FX8350 stock with DEEPCool Frosttwin
Kinston Fury 32GB @ 1886 (but itl run at 1600 due to CPU memory speed (not sure if overclocking give higher speed to ram)) know a thing or two about general stuff, but a NOOB at OCing things.
Gigabyte GA-990FXA-UD3
R9 290x (possible in cross fire) but ONLY when i have money to feed entire family with crack for a month.
Hitachi something 2tb @7200rpm wiht 64mb buffer
Zalman Z3+ Or similar from Thermaltake (cant remember the name)

So the Intel built: Obviously better, but more expensive

4790k + DeepCool frostTwin (Just like how massive it is and how it looks. (Noctua is 2expensive)
ASRock Z97 Pro4, plenty fetatures, USB3.. and a good Z97 built
HyperX Fury 32Gb (need all that amont, know that its a TOTAL overkill. but is dirt cheap.
R9 290x For good OpenCL. I got my reasons reasons. + GTAV max setting and all that crack kinda stuff. And I really dont like hoe Nvidia pushes to pay TOP DALLA for products which are just above "meh" stand point when it comes to productivity/price.
Hitachi 2Tb @ 7200 rpm (I am not doing RIAD) Dont have moeny for SSD.
Deepcool 650W
Zalman Z3+ White.

In both systems I will most likely have to add 2-3 120mm fans on top or back panels.

So here you have it, my overdone complexity of a situation. What do you think? Personally I'd go for the second.. but once i have enough moneeeyyy.
Thanks for all in advance)

As a user of FX-8350 it is not a bad choice when OC-ed(300MHz x 15). i get up to double performance in planetside 2 and Gimp. stock speeds(200MHz x 20) is not terrible if you don't have high demand for responsiveness or framerates.

I'd not recommend Gigabyte GA-990FXA-UD3 for OC-ing. i have used rev 3.0 and have had problems with buggy BIOS, id go for a ASUS Sabertooth 990FX R2 instead.

OC-ing isn't hard when using a good guide but it takes a day or two(especially first time) and requires a good cooler. Also, don't judge a cooler by its looks.

Thanks man! I know how evil something might be if only looks take into account (My ex) ahah
Anyways, I am not planning to OC anything.. MAAAAAAAAYBE if I really feel bored. But I dont play games. Well, l a lie here. I only play nfs The RUN (Its a good game) and hell i do want dad GTAV..

that's it. Breakdown is about 85% work -Premiere/C4D/AE and 15%-gaming. Although I feel like I am gonna get stuck in the virtual GTA reality..

Well, virtually, as little as possible. But no more than $1600
Windows 7. Fkn hate dat daamm win8... dunno why... Now on it.. and i dont like it.. maybe cuz my laptop is just dyyying.
Displays - I dont have yet. But it will be 27" 21x9 2550x1080 minitor.. sweeet sweet piece.
Yes. I do. But even though, I am not getting some super duper gloowy, smooth, rubberizer, colored, screaming orgasmic keys and mice. A regular low profile keyboard and a mouse (my logitech something with 5 buttons will do me juuuuust wonderful) but, hey.. they are now what, like 50 bucks for a good mouse?? I am not a gamer, certainty not a fan of Razer mice and products.

yes, if your motherboard supports it(witch it does). shouldn't be harder than using the xmp profile

Thanks!!) I guess no more worries about slow speed RAM.:)
Thanks for that! But still have noooo idea how to overclock anything.. Actually, once I've overclocked my phone! It did work, but the battery lasted as fast as a teenager's first sex.. But here. its quite more expensive and complex..

Will have to ask about overclocking things here) seems to be good people who know stuff rather than blindly suggest you HIS "AWESOME SETUP MEEEEEN. which has LIKE AAAM FASTEEEST I7 N STUUUFF and like but load of raaaaaam and ssds all over.. . YEAHH"

Another possibility:
Try to get a 4930K on ebay and a decent motherboard and take it from there. I have a system like that as well:
4930K
Gigabyte Motherboard
R9 290X
16GB RAM
All together for around 1000€. You can look it up in my profile if you want.

Okay. Well nothing is ever future proof. And immediately you are out of datem USB 3? 3.1 is out and type C.

I am not aiming to rain on your parade. But it is silly to suggest any build is future proof.

Also never listen to toms hardware. It is a wretched hive of scum and villainy. Lol, I am sure they have their good days but I have not seen anything good come from there.

Yeah, we should've said that. Nothing is EVER future-proof!!

Well, certainly my saying of "future proof" did not intend to have its actual, meaning) I was asking about a relative future prof, ie how good it is for next 4-5 years.
As for TH, i understood, that the place was full of kids who are a fans of blue and gHz and "My i7 is beetaaa than your stupid AMD.. Its funny cuz AMD CPUs really aare stupid.. stupid" that stuff) haha
internet is full of opinions.

Yeah, but besides all that bitching and whining like

"My i7 is beetaaa than your stupid AMD.

if you want to be using that system for the next 4-5 years, investing in the AM3+ platform is actually really not the best idea, because it's already pretty dated and will be discontinued soon. Just keep that in mind.

wow, great build. it should well last 100 years or more.

I love the price to performance of AMD, but the ZEN core architecture will be hitting us in the near future - hard to argue with a graph and a new socket...: 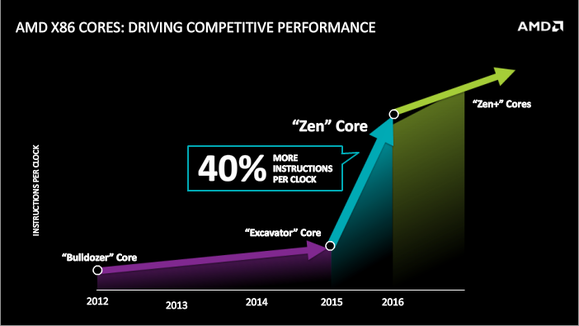 Tom's Hardware is a great source of information with a hub of active tuners, but also, unfortunately, their fanboys. A lot of snobbery and bragging about things half of them don't even own. There's a tier or 3 over your head as far as your build goes. AMD has had a rough patch and where that system tops out their offering, there's a few intel builds that surpass it. Game settings will slide over time and only your standards keep a system's value relative. Effectively, people work towards maintaining a higher lvl for longer periods of time with more expensive technology. It's about finding the sweet spot of 4-5 year runs with minimal upgrades (1 video upgrade for me).

Someone could have a system 150-200% premium over yours and a few bad decisions in options could make their experience worse. Establish standards for the way you set up and run games letting the pile of justifications that result be your expiration.

P.S. It's fun to simulate builds to daydream, but realistically you have to start from scratch every 3-6 months.