My Review/First Impression of Borderlands 2

It’s 11:30 on Monday night. My Steam friends list was full of people playing L4D, TF2, Tourchlight and any other game just to pass the time for what was about to come. 11:55 rolls around and my friends list is overflowing with friends online but oddly enough, nobody was playing anything. Windows alerts me to an update and asks to restart. I agree knowing it wouldn’t take long because of my SSD. Once I’m back up and logged in to Steam… what’s this? Steam is downloading something. It’s Borderlands 2 unlocking! By the time it is finished and I’m on the homescreen it is 11:58 and I’m in a party with 3 of my closest friends waiting to begin our multiple month long journey.

So I started Borderlands 2 with my 3 closest friends. We started the game watching the opening cut scene in awe. There is something about this game that really just brings a group of friends together and gives all of you a unique experience that is enjoyable, hilarious and full of ass kickery. Immediately you can tell that the signature Borderlands humor is still a big part of the of the game which was one of the best parts for me. Now this is my review, my take and my first impressions of the game. I’m here to give you the good, the bad and the ugly. But lucky for the player, mostly the good because that is really all this game has to offer.

So let’s just start with the ugly because there isn’t much there and I’d like to get the bad parts out in the open now. I’d have to say my least favorite part of the game, are the menus. At first they seem clunky and a little hard to understand. But once you do understand and get a feel for where everything is… it’s just left feeling clunky. Probably the biggest problem with the menus are the text boxes. When you want to find the stats of a gun or a mod you have a couple options. The first option is to click said gun or mod and the starts are displayed. The second option which is really the only option is you hover over the gun or mod and it will display the stats… in a separate text box. Now the problem with the hit box for this text to open is the entire gun which is a good portion of the menus and the box will follow your cursor around until you somehow break free of its curse. The text box will hover over everything else in the menu including buttons to switch to different parts of the menu so ultimately you find yourself opening the menu, closing the menu because you accidently hovered over a gun, opening the menu again, and finally getting to where you want to be. 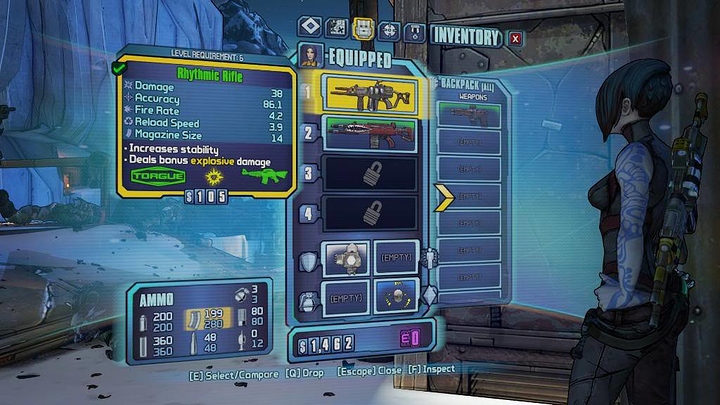 In my opinion, they should have just given each part of the menus its own space so that you could hotkey your way there the menus so that if you do accidently get the stats of something you don’t have to struggle your way around it. The second problem I have with the menus are the switching from in your bag to being equipped. So with this, which you can kind of see what I’m talking about in the picture above, is that your equipped menu and your bad are side-by-side but only one of the menus can be open at a time. You have to start in the equipped menu, move to the bag menu, select the gun or mod you want to equip and literally drag it back to the equipped menu and place it in the slot you want it in. This is when the menu really feels clunky when you are going back and forth between separate menus just to use a gun. But I will admit there is kind of a growing period were at the start of the game you are confused and it is hard to navigate the menu but once you progress a little you get the hang of what is a good way to go about browsing the menus and doing other things and now it doesn’t really seem like a problem at all. 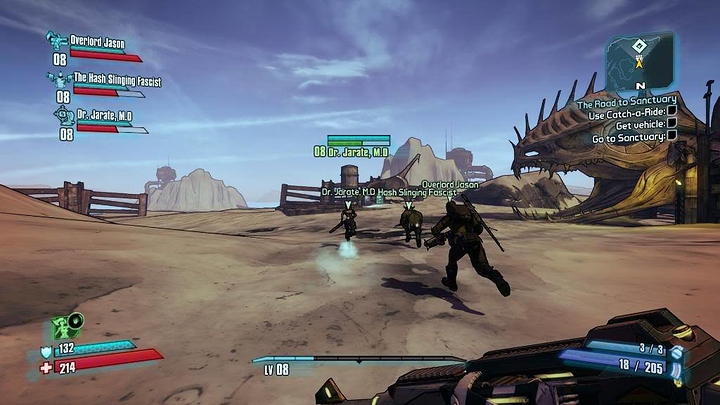 Playing in a group with your friends is really where this game shines. I have 1 single player character and 1 group character that my friends and I are only allowed to play with each other. In my mind, it is a great plan and does work very well. Running around with your friends and just blowing up shit and getting into cars and have a two car crash derby are the things that the game almost highlights on. I’ve seen a difference in how some of the things like driving cars have improved from the original Borderlands. They have added a couple things to cars and made a few new touches that make cars so much more fun to just dick around in and get a lot of laughs with your friends. You now have the ability to customize the skin of your cars and even the weapons they use. This gives it a nice touch and really does make it feel more personal and different from Borderlands. I can remember back in Borderlands when my friends and I would fight over cars just for no reason whatsoever other than the fact that mine was red and his was yellow but now you really do have a reason to fight for your car. 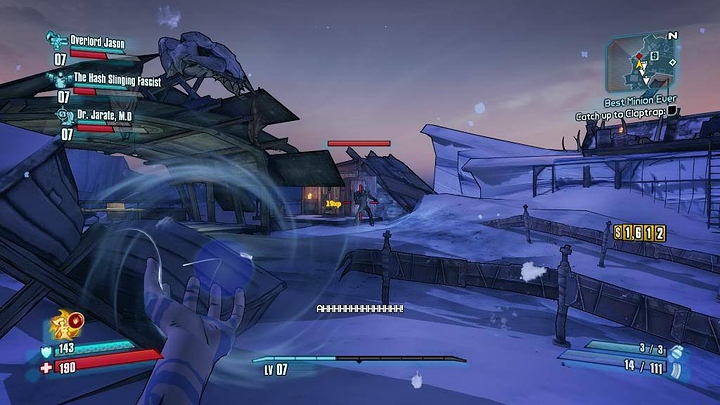 Each class starts with one, main ability each are equally as fun to use but all have their own obvious purposes. From there you get to pick a talent tree. For example as the Siren you can focus on elemental damage, healing or phase locking. And just like any other game with a skill tree, you get points for leveling up and you put the points into your desired skills. I don’t need to go into much detail here because any gamer of any kind knows what a damn skill tree is and you have brains, you can figure it out on your own. Now the thing I will go into a little more detail about are Badass Tokens. That is right, you get Badass Tokens for doing Badass Challenges. Listen people, I can’t make this shit up. They are literally called Badass Challenges. Pretty simple concept though, each challenge has you do something different like kill x amount of Bullymongs or get 10 headshots with a sniper or get 25 kills with and explosive weapons etc. Every 2 or 3 challenges you complete, you get a Badass Token. These are used to give you little permanent stat bonuses. You use one token on a list of 5 bonuses that changes every time you use a token but the list only rotates between I believe 15 or so options. Now the cool thing is that the bonuses and the tokens are shared between all of your characters. It isn’t that crazy because no matter what you pick the bonus will help every other character any one way or another so there literally isn’t a bad choice when it comes to using the tokens. I like this a lot although I can see it kind of being abused. It seemed a lot easier to get these tokens early game which means someone could just make a new character get a bunch of tokens and use them. But I guess it doesn’t really matter when you are slaying physicos.

Probably one of my favorite, and I’m sure a lot of other peoples favorite, part of this game are the guns. Borderlands 2 has a way of rewarding you just like Borderlands. It is the greatest feelings to open up a weapons chest and see all the goodies stashed inside. The great thing about Borderlands 2 is that the guns actually look cool in this game. Pretty much every gun has its own unique look to it whether it be the muzzle or the barrel or the body or the paint job and that only makes opening the weapons chests feel even more rewarding. You can find just some of the craziest guns that just make it fun to shoot like dual magazine guns and revolving barrel pistols or rocket launching assault rifles and even shotguns the unload an entire clip in one shot. Now that is what I call a scattergun.

Finally I want to briefly… very, very briefly talk about the humor. Boy does this game have a lot of it. I have one image that I really think speaks for itself so you can just take it as you would like it. Borderlands was a game that really introduced humor into FPSs in my opinion. It was actually fun and they really kept it going to with Borderlands 2. You can’t take 5 steps in this game without finding some sort of humor but a lot of it can be hard to find or hear or catch, so pay attention. I could sit here and raddle of a ton of quote from memory which I honestly really could but I think hearing and seeing it for yourself is a huge part of the game and I don’t want to take that from you. 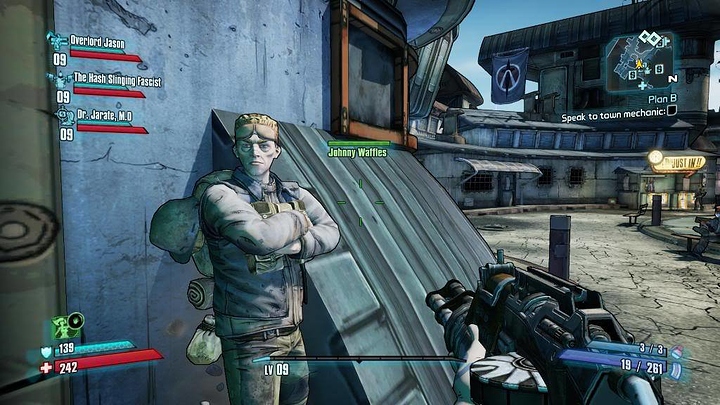 tl;dr… just buy the fucking game. It’s amazing. Fun, hilarious and Borderlands will most likely continue to be one of my favorite all time games and I hope you can share that with me. So if you made it this far in the review/first impressions/ my thoughts on Borderlands 2, thank you. I really appreciate you reading and I hope you pick up BL2 if you haven’t already. Thanks again for reading and feel free to leave comments or whatever, I can hopefully answer any questions you have.

I have bought the fkn game. Even preordered it.

But for some twisted reason, they are releasing it the 21st for Europeans. So my game wont unlock until then.. I could always VPN and pretend to be 'murrican, but I hear people can get banned for it on steam so.. meh.

I have currently for my 360, when it gets on a sale, hopefully black friday, I'll pick it up for PC.  Here's the reason, as I have explained to numerous people before, I have friends that only play 360, cool people.  And then there is this group of skallywags on TS :)

Yeah it wouldn't be worth getting ban for. only 2 more days though. or 1 day i guess depending on how you see it. But it is worth the wait.

Borderlands 2 can give people headaches, including myself, because of the FOV. I suggest everyone takes this into account.

I've never heard of a single person complain about that haha. Must just be you.

Gearbox pretty heavily publicized that the PC version has adjustable FOV in the menu. The limited FOV and jerky mouse control were my biggest complaints about the original. Both are perfect in BL2.