My PC keeps crashing.. Tried everything I could think of

For a few months now, my PC keeps crashing every time I use it, pretty much.
Games crash to desktop, other programs crash when playing games and I get bluescreens (even when just browsing the web). (almost always with different error codes, have used Microsoft hotfixes)

My PC basically became frustrating to use to the point where it is almost unusable. I can't play most games for more than ~45 min without crashing.

To try and resolve this issue, I formatted my SSD and reinstalled Windows, disabled all my overclocks, ran Memtest86 and only installed all the necessary drivers.. But it hasn't fixed it.

Any clue what to do?
Many thanks in advance!

do you have a cheap psu?
what are your specs?

Hmm.. Haven't thought of that. I don't have a very good PSU: Corsair CX750M

Though, is there any way to test if the PSU is the problem, without flat-out buying a new, better one?
(and can the PSU be the issue when background applications crash while gaming, or even when I get a BSOD just browsing the web, nothing intensive?)

Try installing WinDbg and inspecting a crash dump. WinDbg will give you its best guess as to what caused the crash.

Games crash to desktop, other programs crash when playing games and I get bluescreens (even when just browsing the web).

Modern browsers use hardware acceleration. You could try disabling that, and if the crashes go away while web browsing, then the problem might be related to your GPU and/or its driver.

Here is a simple thing to try, and it won't cost you anything...

Manually set RAM timings. This is going to sound weird but worth looking at. For those questions like this, "I have tried everything but my computer problem won't go away" can sometimes be solved by manually set the RAM timings in the BIOS.

Motherboard BIOS "auto" is not quite as good as it should be. Take Auto CPU voltage for instance, 9 times out of 10 it will overvolt your CPU. Auto RAM timings even using the XMP profile is not as stable as setting things up yourself.

Odd unresolvable computer problems can be caused by RAM issues and they are a bitch to chase down. Either way it will do no harm, cost you no money and may solve the problem.

Well check your event log, but it's probably a bad power supply, you should probably stop using it before your computer explodes, might also be the motherboard, or your CPU isn't seated correctly and or is missing a pin on the board

I can say with almost 100% certainty its the power supply, the cx series should never be bought beyond 500w. It's almost criminal that Corsair makes those models. Had a friend with the exact same issue. PC would randomly shut down, and it came to the point where the PSU wouldn't even fire up.

I have actually seen where the PC was fine hardware wise as we swapped all components before finding out the mobo couldn’t handle the CPU. As a result we had to downclock the CPU to below its normal operating speeds to get it stable.

When I was troubleshooting I actually found online a thermal warning for the mobo and cpu combo he had. Worth looking into if nothing else works.

You can test your PSU with one of these. I use them at work all the time. 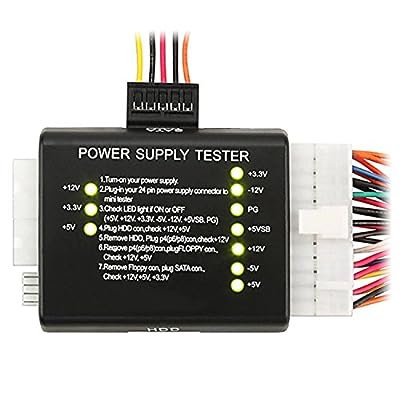 Prevent electrical disasters by testing your power supply regularly to identify problems before they damage your computer. Monitors voltage output. Green LED display lights-up when your devices is run ...