My laptop is using a lot of RAM

Check out his screenshot 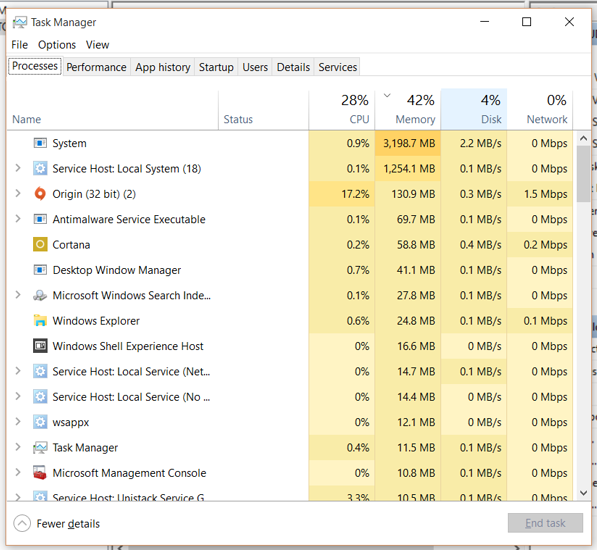 Basically, I got 3-3.5gb of ram taken up by this 'System' process. and another 1GB taken from 'Service Host'.

What the heck is going on??? I have 16gb of ram in my system and I can't launch any of my hyper-v machines because I don't have enough ram apparently. I can't kill the process because I just get a prompt that the action was invalid for this process. Has anyone seen this before?

I did an upgrade from Windows 7 just to activate the license. I then did a fresh install from a windows 10 loaded USB.

The writing speed being taken up by origin is probably because I was downloading a game from origin at the time of the screenshot. All other behaviours persist even when I'm not downloading

that is un usually high

That is an unusually massive amount of RAM usage... is this a fresh install? It's possible Windows update is rocking hard.

I just checked in my 8.1 install, System is using up 0.1MB of RAM and Service Host is taking up maybe 200MB combined.

My windows 10 update was doing the same thing all the time.

When you did the Windows 10 install, did you upgrade from a previous OS or did you do a clean install?
If you didn't, I would wonder if an 'fun' apps got migrated to your 10 install.

I just did a clean install on an i3, I'm at 0.1mb for memory use. I have another machine at home that runs at about the same.

You got any other background apps running? Updates? Even then, seems like a lot. I would double check and perhaps run a cleanup.

I'm floating around 200MB-230MB for my system process.

Have you installed WIN10, upgrading to it? I think we might need some more info. There is always the possibility of viruses too, so if nothing else fits the bill, give your machine a scan.

You're looking a the wrong tab. The system process is just a cover process. Windows is being asked to do something by some app (an installed one or by another windows component) and it's doing it. What app asked it to do what!

Oh look: 2.2 MB of I/O from your disk. That's actually a lot of I/O for a specific task, especially if you're system is supposed to be on idle and very useful information. It means the thread isn't locked up or a memory leak because it implies that the memory is actively being used for something. Okay so it's probably not a glitch so what is it being used for? Maybe figuring out what the process is writing/reading from the disk will give us that info. What files where are being read/written to exactly?

When that happens, switch to the performance tab and click on "Open Resource Monitor" -> Disk tab -> expand disk activity -> sort by total IO and look for a total I/O in the neighborhood of the IO currently being used by system. Check the directories it's writing to/from for clues. And with only a screenshot to work with that's where the trail went cold~