My Journey Switching to Windows

I wanted to share my experience in going from an ITX small Linux build VFIO GPU Passthrough nested VM ZFS ECC DDR4 workstation to running Windows 10 on my desktop.

I’ve wanted to run Windows for a long time, but it just had too many issues. Games didn’t work, audio issues, graphics would look right. Things like that. I also wanted to be able to customize my desktop without breaking it.

Anyway, so I’ve been on Linux for a while. But I’m tired of Linux. Sometimes I just want to use my computer instead of having to troubleshoot stupid issues. Things should just work!

So, using an extra SSD, I decided to install Windows 10. The installation was weird, I hadn’t disabled default options before. I also created an account for the user, but it never asked me about the root?

After that, a browser popped up and told me the news. It said it was “the new edge” and that I should look around. Lol no thanks. Instead I opted to use a package manager to install all my software. Now I know Windows has a ton of customization, so I had whatever package manager I wanted to choose from. I opted for Chocolatey. Chocolatey has a large repo of packages and would work in any shell: Command Promt, PowerShell, PowerShell Core, etc.

A few minutes later I had all my software and tools installed. From there, I decided to install Windows updates. These took much longer to install than my updates on Linux, but I was able to do things in the background while they ran, which was nice. After a reboot, I started to get to work.

But I still wanted to run Linux and Linux applications. I didn’t want to dual boot, though

Fortunately, I was able to find a Linux compatibility layer (IT IS NOT EMULATION) and get that running. Now I can run all of my Linux apps on Windows!

It’s been five days now, and I haven’t had to reboot into my Linux installations. I’m so happy with this build, I might do another small ITX Windows build.

All of my tools work. All of my games work. I can even run my Linux apps on the Windows Subsystem for Linux Version 2.

Thanks for reading. I hope those of you that are struggling to leave Linux for Windows find hope in this post! Let me know if you have any questions! Tell me your story!

How’s WSL2? Still beta isn’t it? Or feature preview, whatever they call it.

What specifically do you run on it?

Have you tried the Windows Package Manager?

What specifically do you run on it?

Tons of other stuff, too.

Have you tried the Windows Package Manager?

No I’m going to wait on that. Sounds like it’s gonna be awesome but your point on Chocolatey plus the “newness” of the official Windows one is making me wait.

Tons of other stuff, too.

Can you do admin things like configure network interfaces or does it not have that kind of access?

Looks like it’s possible, but I’m not going to do that.

I am running a linux software on WSL. The program crashes every time I try to make some drawings with the...

Can you do admin things like configure network interfaces or does it not have that kind of access?

Not sure, I use VMware and bare metal for that

Issue WSL 2 seems to NAT it's virtual network, instead of making it bridged to the host NIC. My goal is for...

r/bashonubuntuonwindows - Using bridged networking to get outside access to,...

BTW, it’s now possible to use WSL 2/Windows Virtualization with third party 64 bit hypervisors. Don’t let people lie and say you have to use Hyper-V.

This is how the we get real work done

The best linux GUI is putty or mobaxterm

Hands down. Though with native SSH in PowerShell now I’m finding I use it less and less. Windows Terminal with PowerShell Core seems to have eliminated the buffer issue.

While not as feature rich, I think you’ll like Windows Terminal 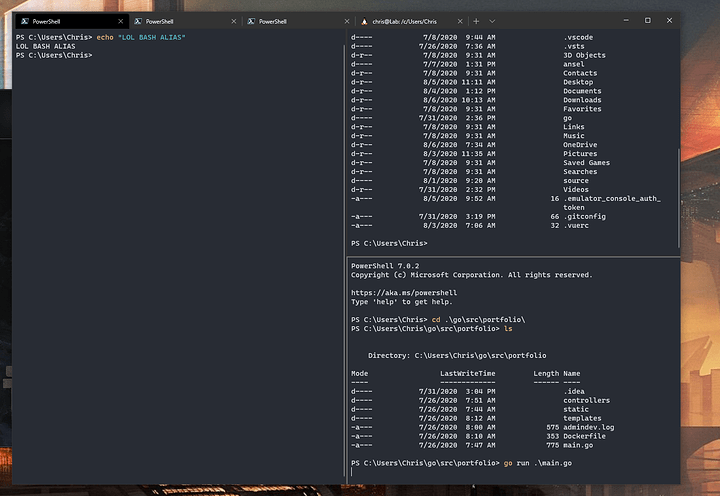 Tbh this switch probably happens more often than one might think.

I ran Linux exclusively for about 15 months myself before i finally went back to Windows 10.

Ironically my switch from Linux to Windows was more painful than the other way around.

Anyways it ultimately comes down to

All of my tools work.

Is the only way.

Tbh this switch probably happens more than one might think.

Medium and DevTo have a plethora of blog posts about people leaving MacOS/Ubuntu/ARCH LINUX BY THE WAY I RUN ARCH I READ A WIKI AND INSTALLED ARCH I USE ARCH BTW for Windows and WSL.

VS Code + Remote SSH plugin + WSL plugin does a lot for enough people I guess.

I have ARCH BTW on my second boot drive but I havent touched it in months. I just dont care about the linux daily anymore. I still have the libreboot thinkpad but I’m running nonfree codecs on it (get rekt stallman). I love my linux machines, but I also like getting stuff done when I need to get it done and theres just too much configuring I have to do to get where I want to be with linux.

Sometimes customization is great… sometimes you just need it to do the thing now and dont feel like fucking with it.

IDK what all the “having to mess about” to do stuff in Linux is? I never had to…

Cherish it then and revel in the glory

I never had to…

Looks like it’s possible, but I’m not going to do that.

Oh I thought that was one of the main selling points of WSL2, but maybe I’m misremembering. I also can’t think of any use for it, just wondering what it was like.

I can get a working install of Ubuntu running faster than I can with Windows 80% of the time.

That being said if I want to run Windows software I have three options:

Proton/Lutris/Wine: Bit of a crap shoot and if it does work you have to worry about being banned for “hacking” More to maintain.

Virtualization: Some of the same issues with bans, More to Maintain, More money for hardware ie two GPU and a CPU beefy enough.

All don’t cut the muster anymore for me. I run Linux on another machine and SSH into it from Windows. Little more hardware (Raspi) And a little more to maintain but everything is there is and it is pretty hands off for me.

(for me anyway lol)