My Idle temps are way to high,

I have an AMD FX 6300. Its been idling at 60 and 82 under load. Its been doing this for a year now. I'm using a stock cooler and I can't afford a new one. I've cleaned it to the best of my abilities. Any ideas?

Change to a Better Thermal Paste?

stock cooler shouldnt be the problem, unless its faulty.
i have used the stock cooler of my FX8350 more then a year, and it got never above 55C on 4.2GHz with prime 95,
which is basicly pretty good.

I think that you having a wrong fan profile setup, or your thermal paste has airbubbles in it.
Also how is your airflow inside your case? cause thats realy important.

Just do this - guaranteed fix! 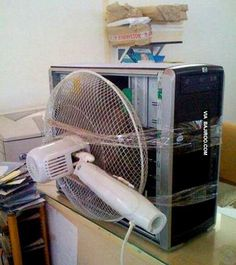 Sounds like either a faulty CPU, faulty mobo in terms of voltage regulation, or faulty PSU with dirty power (this probably being the least likely since a mobo is meant to tell the PSU how much power to send. Usually, if your PSU is frying the CPU... It's just fried period). Only other options are screwy BIOS settings or your cooler just isn't making proper contact, assuming the fan is working.

Before I got an aftermarket cooler, I ran my 6300 with stock fan: never more than 55 degrees and that was playing Guild Wars 2 max everything.

well i do wanne point out that AMD temp sensors are no where near accurate at all.

Like i said check your fan profile.
How is your airflow?
Which motherboard are we talking about?

What about cable mangement, it can really affect your temps sometimes.

I've never known AMD CPU temp readings to be faulty other than screwy third party software, not the physical sensor itself, if that's what you mean.

AMD FX cpu´s dont have a physical temp sensor per core, like intel cpu´s have

Even still, a single reading should give you a ballpark estimate about all the cores as a whole.

I was assuming the OP's fans were working, as that would seem an obvious thing to check. Even if the fan profiles are messed up, 60 degrees idle is just... Insane

Well im currious if he is using an MSI AM3+ board maybe. ;-)

Why that particular mobo? Bad history?

I cleaned out all the dust out of my pc. More than I expected after 3 months. But now my problem is better and worse. My idle is 77... and under load its 77. I re-seated it, used multiple HW monitor programs, and its 77. Not Fahrenheit, Celcuis.

I would start with a new thermal paste but i would also consider a better cpu cooler.