Hey-ho thought I would post a picture of my first loop. I'll post temps and the like once I've got it up and running (assuming it still works). Comments/suggestions very welcome. New to water cooling so always willing to learn. thanks 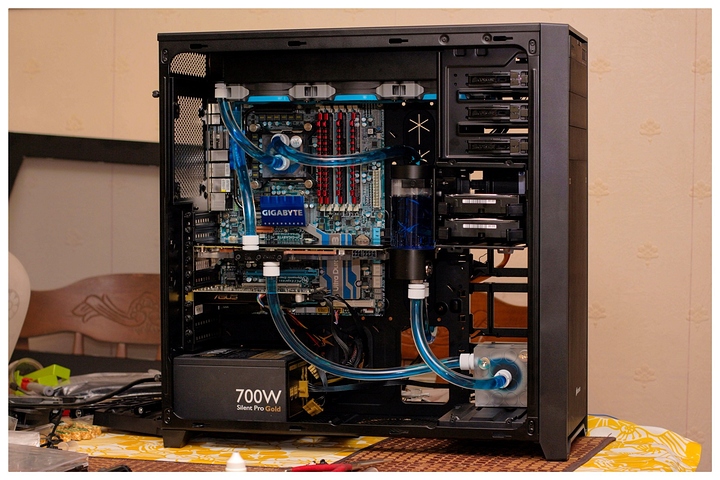 stop making me want to watercool my system when im too scared to do it and i dont have the time or money. ;_;

Looks pretty good. Got loop components coming in post this weekend myself. A little congratulatory present to myself on getting a new job.

I was originally planning to change mobo and cpu and realises it would be a waste at this time.

haha congrats i kinda did it for the same reason lol

This looks very nice! it looks better than my first loop hands down!

Nice! Aren't those corsair fans on your rad 3pin? That means they're running full speed all the time, how are you controlling the RPM on those?

*tear* he's all grown up

Yep they are. At the moment its a bit of a bodge job as i have a Lamptron CW611 on pre order.

Im using a molex to four 3 pin adapters from maplin.

They are the performance varient fans (i wanted more range of rpm). For some reason two of the connectors seem to run on 5v so that fine. The other runs on 12v so i have acouple of resistors in there to slow it down and keep it quiet.

That looks very nice. I would love to do a custom loop myself, but tbh. I don't see a reason for it. My temps are absolutely fine even with overclocking and that's all on air. Who knows, maybe one day just for the extra style points. They were right! Putting a nail through my hard drives made them quieter too!