My (dead) Game Project [Just Do It Chalange]

Hey guyz.
So some time ago i ended up joining "Just Do It" 1 month challenge. I joined a near the end, but still, no excuse to be that late. So instead of struggling and banging my head against the wall in silence and being even more late, i decided to basically give you an update in here about what am i doing and how it is going.
If somebody is interested, i can post here the code and all settings, so you can see exactly what i have done.

The Idea
Some time ago, i was browsing Google play to find some time sink game. I found Deiland.

Let me get this straight. I [email protected]#$ing love Deiland. I wasted so many hours in that game... Oh my god...
And i looked at it and i started thinking "i can do something like that.". And then i joined "Just Do It" challenge. So my goal is to make something similar.

The Engine
Unity 3D for game engine.
As much as i can work with Game Maker, Unity is the 3D engine of choice.
Also, Unity Asset Store have a huge library of free assets.

The Game
Placeholder for whenever i have something playable.

Then i created custom gravity settings, because i do not want stuff to drop endlessly. I used this tutorial:

I did some changes to the code in order of the camera to be Top Down and not First Person. 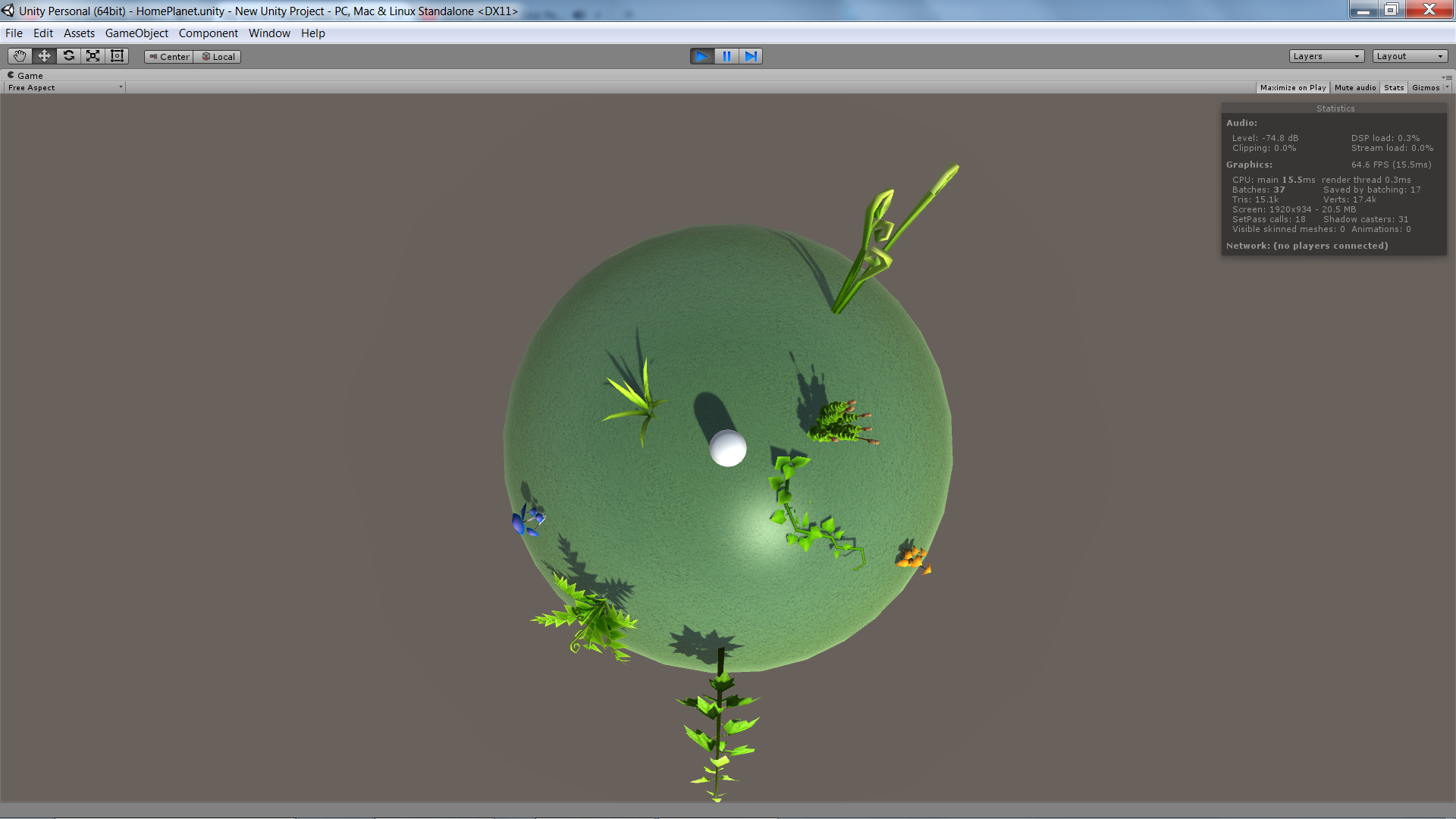 Inventory System
I have basically banged my head against the wall as to how to make the inventory system with arrays. Then i discovered this tutorial.

It's a beautiful inventory example using List instead of Array. It has tooltips and drag and drop... I changed the code a bit, to make it stackable, so i don't have to make it drag and drop and stuff.

And then came the issue.
Currently my issue is with making the harvesting system work properly.
I can make it work with some plants and not with other, and i want it to work with all of them. So i should change either the gravity system for the plants or the harvesting system, and i will try both and see what works better.
When done - there will be update.

Still trying to wrap my head around the gravity issues with the plant life on the planet... We shall see... As soon as i got this gravity thing working, i will upload an Alpha version...

A game isn't something you just punch out in a month - unless you name is Digital Homicide.
That said, I applaud your efforts and wish you continued luck and growth with you endeavor. Now that the time frame is over, maybe you should take your time with it to make sure to polish it up as neat as you can instead of speeding it out to hit a deadline?

Plants and Foliage
After multiple unsuccessful attempts to twist the code in the character controller to fit the plant life on the planet, i got tired and used collision.
3 lines of code.
I wasted a week, trying to fit ray casting and so on... All i needed was 3 lines of code.
void oncollisionenter(){
physics.rigidbody.iskinematic=true;
}
That was all i needed.
I will do some slight changes, a basic main menu, so you can quit the game with something different than Alt+F4, do the basic harvesting and upload the pre-pre-pre-pre-pre-alpha...

Make sure you learn to create assets though :D

3D modeling - www.wings3d.com
I am still using tutorials to work with Photoshop, and honestly I hate it... I tried a few other solutions, non of them I found easy to work with or intuitive or whatever...
Sounds - now I am blatantly stealing those from some website with CC0 sounds, because I despise FL Studio more than any other software...

How has this been going? Looked cool, have you been doing anything with it?

Just saw a video one something similar on YouTube

Yeah... It's not going well... I have some RL stuff to take care of, that takes WAY more time than I have expected them to...
Sad really... Now I have to force myself back in the project... Not sexually...

good old RL, I know how that is. I look forward to updates if you ever have the time, you starting this made me look into making something of my own.

Have yet to start, but one day soon... (I procrastinate)

Tell me about it..
OK, I will try and do something tonight...
Just to make some progress...

how did this go btw?

was trying to find this due to seeing this

I did 3 things wrong with this project:
1. Started it without knowing can I finish it. Turned out I can't.
2. Had to code in C# and I'm absolute crap in C#. Whatever I did was stitched together from bits and pieces I found on the Web. They didn't fit very well...
3. 3D... Every time I try 3D it turns out I can't... I just can't. I understand the principles, I know the rules, at the moment when I have to actually do something in 3D - it's all over. I just can't code or program, and here you have rotations and angles and the gravity didn't work the way I wanted...
Basically the project is dead... Especially keeping in mind the other project, that is actually progressing and I know how to do.

In retrospect, I pushed myself way beyond the limits of my capabilities and the rest is dead project...