So I am in the process of building a new main desktop and wanted to create a short build log on it as the process goes along. Where to start, well I guess I can start with my main rig, it was in a caselabs Mecury S8 that I got from a friend for a steal (Under half of retail). After some time I got sick of the huge case and wanted to build a smaller form factor build. I had purchased a Ncase M1(https://www.ncases.com/) shorty before getting the S8, but due to me moving into the 10gbe world it was going to be nearly impossible to make it work in t hat case. So I picked up a Asrock ITX x99 board for the wife to give her my current 5820k that was in the S8 and began to start the hunt for a new case that was mATX to allow for the addition of 10gbe without doing something jankey with an m.2 adapter. 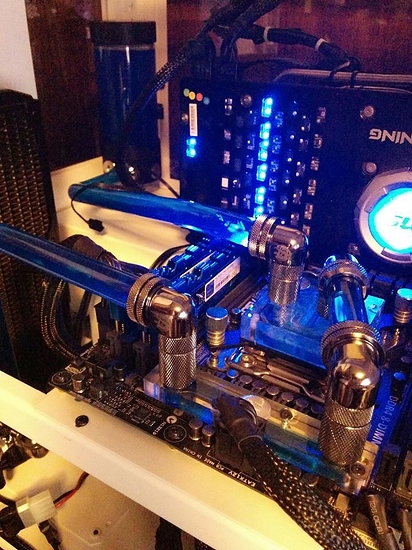 The case I next looked into was the Cerberus(https://kimeraindustries.com/cerberus/#cerberus-hero), but its not in actual production yet. I contaced the company and found out they had some extras from an early batch run for a company and quoted me a price of $500. While I really liked the case I couldn’t justify that price just for a small volume case, so the hunt continued. After some time I ended up on the Caselabs Bullet BH4 case, due to wanting higher build quality and watercooling support.

So I ordered the case and waited for it to be manufactured and shipped as the rest of the build was going to be Ryzen at this time and was in no rush. After the ship date listed when I initially ordered passed, I contacted caselabs and found out that they had some issues with their production line and that they had some people leave from their customer service to explain why I was not notified of this delay. Some more time passed and I sent them another message asking wtf was going on with the case as it had been about another month. They said that it was magically done and shipped that next day. Needless to say I expected more form a higher end case manufacturer and will probably not do business with them again if I can avoid it.

So after ordering the case I did some research on what kind of loops seemed possible. It seemed hard to find any people who have done loops in this case as its a newer option caselabs offers. The one that most interested me was " The Little Big Bullitt" (3rd link below). I was interested in Vega and was expecting the card to be shorter like the old Fury card, but with new information on the power consumption of the Vega FE card I will probably end up with the Zotac 108ti Arctic Storm Mini, but time will tell on this.

Hi ek. I'm in the process building a rig and i'm trying fit the predator to the really small new...

Hi Folks I was not planning a new build for this first semester and had quite a different idea...

So using this little big as a base line I then went to research the best slim line rads I could fit in this build. Searching a little bit I found this nice guide http://www.xtremerigs.net/2015/02/11/radiator-round-2015/ As I want to run it on as low of rpm fans as possible I ended up ordering the Hardware Labs Nemesis GTS 240 mm and 120mm radiators. I went with these over the Koolance HX due to them performing better under low RPM allowing me to keep the fans spinning at lower rpms for longer.

After making the decision on the rads I then went to figure out what fans I was going to get. I had run Noctoua NF-F12 PWM fans, but this time I decided to give the Nidec Servo Gentle Typhoon fans a chance. They are also one of the better fans for watercooling(not tons of difference to be honest between all of them), but honestly I didn't do tuns of research, but from back when I did my earlier loops they were on my list and fit my color scheme this time. So I added them to my order of the rads and then moved on to picking the pump.

I had run D5 pumps in both of my prior loops but due to the size of the bottom area of the bullet I decided to switch to a D5. I also did a little research on benefits of DDC vs D5 to help me decide on the pump. The easiest most basic info I found on the comparison was https://www.ekwb.com/blog/which-pump-should-you-use-d5-or-ddc/ . So wanting more control on the pump I ended up with EK-XTOP DDC 3.2 PWM Elite - Acetal. This was the only PWM pump saw on PerformancePC and with these parts selected I placed my order to get the build started.

The next decision I have to make for this build was the reservoir for the build, with the case having limited size I am not 100% on what I am going to end up with but I am toying with either using one of my EK X3 reservoirs or to maybe try the XSPC Ion reservoir.

The next part I picked up last night was the Fractal Design Silent Series R3 60mm, I choose this part because I currently use two of the 80mm versions of these in my HTPC Node 605 and they run pretty quite. This is going to be be the only air flow for the bottom section of the case where the watercooling pump will be and the DDC pumps can run a little hot so it will need a little air flow to keep it happy and hopefully last longer.

I also placed an order for two Bitspower Case Top Water Fill/ Through Hole Fitting Set - Black Sparkle Finish to have a nice way to transition from the top part of the case to the bottom. That color already matches the other hard tube fittings I currently have and this will allow me to start to plumb up the parts that I can prior to the selection of the Mobo/CPU/GPU part of the loop.

The next part I will most likely pull the trigger on is going to be the SFX PSU, I am currently looking at SILVERSTONE SFX Series SST-SX800-LTI or the 700w variant. I don’t shy on spending money on parts I think are better quality then others, but the difference in price from the 700w to the 800w is almost an extra 30% increase for 100W more power. I guess once some of the Vega/Threadripper products are reviewed I can make the evaluation on if I think I will want the extra 100W. 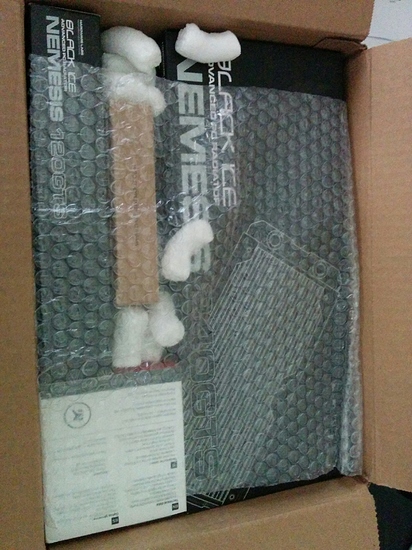 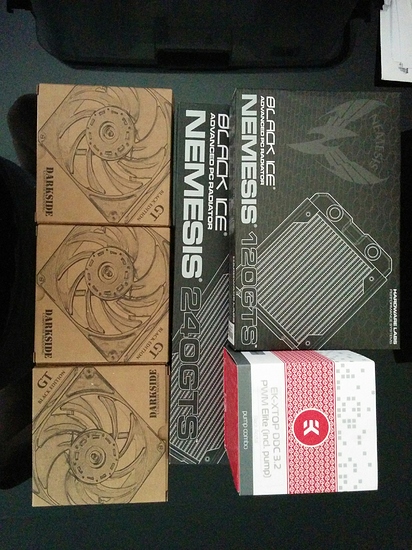 So I test fit the radiators, and it seems like I might be able to make both of them work with heavy case modification, but I think I am going to change the 240 to the 240 cross flow radiator. This will cause me to loose some thermal capacity and I will still need to modify the case a little but it will make getting fittings and other things a little less complicated.

Placed a few more orders since my last update, the most recent was the SilverStone SFX Series 700W 80 Plus Platinum Modular SFX-L Power Supply. I went with this one over the 800w version due to at this point will probably end up with a Zotac GTX 1080 / 1080ti mini and add a water block to it then. So between cpu and gpu that 300W each and an extra 100w for either to go over / run the pump fans ect.

I placed another order at performance pc, I got the different 240mm rad to better exist in the case with the current 120mm that I had ordered earlier. I also got a bitspower tank res, as it was thinner then the other options by about 10mm on average and will match my fittings. The last thing was an aqua-pipe just in case I set it up in the configuration. The last thing was a T fitting and temp sensor not 100% sure I would use it but will probably place it in the loop. 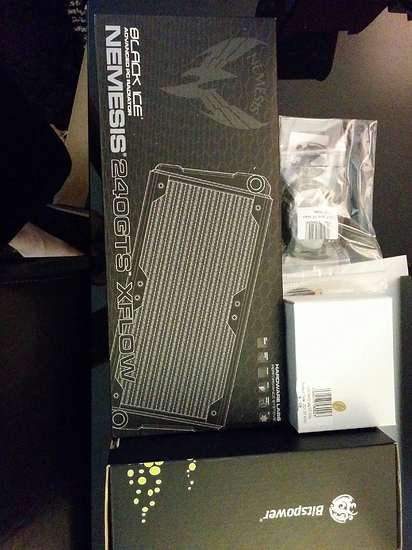 Looks like I will have to put the rez in the bottom so slightly sad about that, but might be able to make it work still we shall see. As for the plexy mounting plate looks like some modding will be needed but expected that to be honest. Also doesn’t seem like Ill need the aqua tube but not upset as its nice to have it on had for later builds. Also going to have to swap 1 of my 120mm fans to a slim line to make the rads fit bettter to have less mods required. Probably going to do some of the tubing and pump mount ect since that will help me get most of the loop set up the way its needed. Ill take pictures of the case and what not when I get some time to work more on it then just mounting rads and seeing what its going to look like. 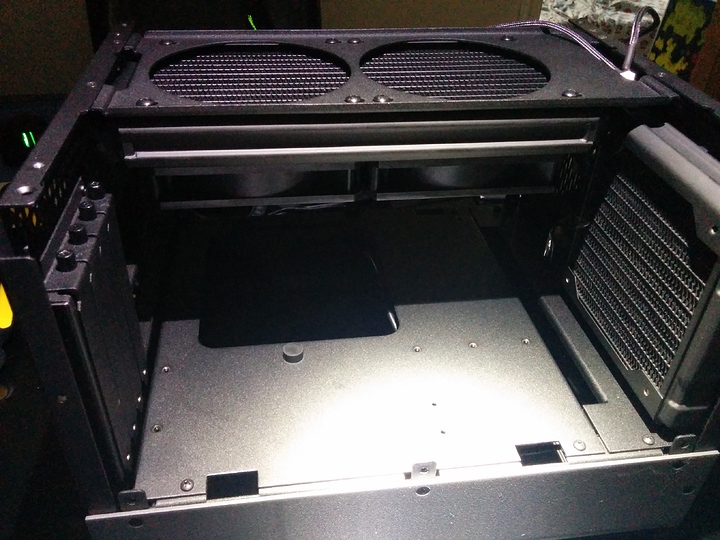 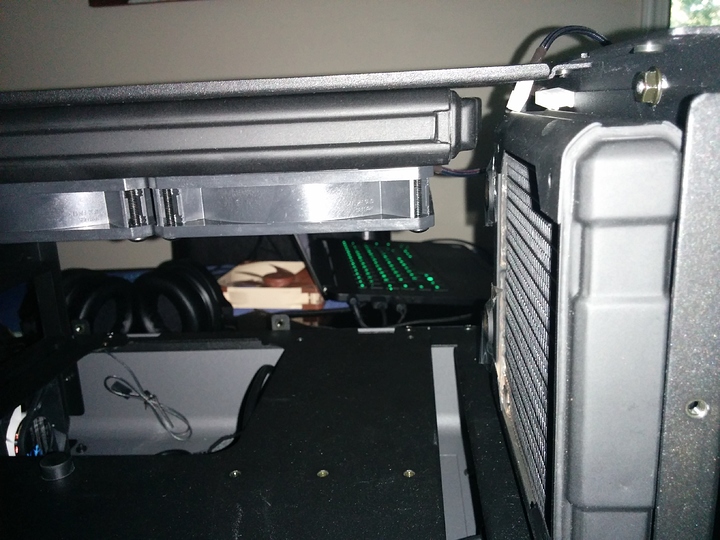 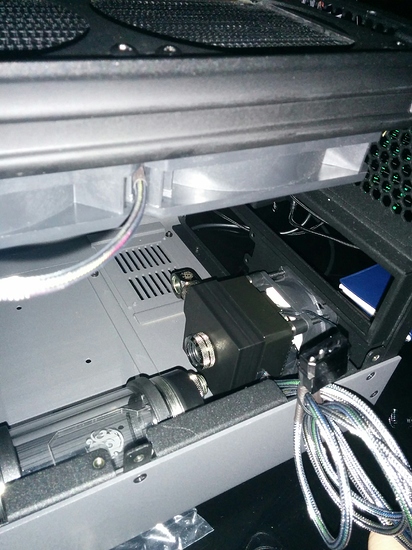 Ordered 4 soft tube fittings(Bitspower same color 1/2,3/4) for the bottom, I know I need to use at least 2 of them but might make use of the other two depending on how hard/feasible I think it will be to do hard tubing in the other spots. The spot that I have to use them is the outlet of the pump. That is the right angle next to where the PSU gets mounted and the hard tube fittings I have wont work.

So since I’m in the US apparently metric drill bits do not exist, so had to order it off amazon (was trying to get it quicker then 2 day so I guess gotta hit up the amazon locker to get it) I also ordered a digital caliper so I can get correct measurements for any extensions I might need and for future builds. Also I should have most of the bottom compartment tubing done on Monday.

While trolling for ideas, I found another build similar to mine, Figured I would share as it seems like his turned out pretty well.

More fittings on the way, looks like I will have to delay a little on some of the loop work but should still be able to do a little with the fittings I have on hand. 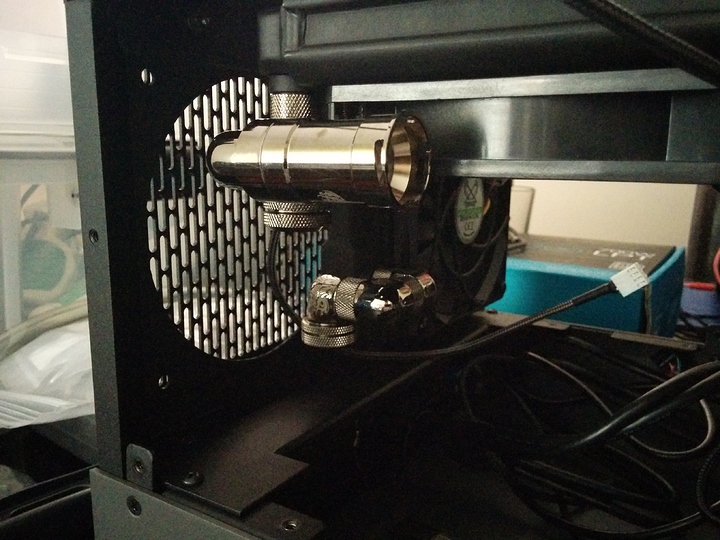 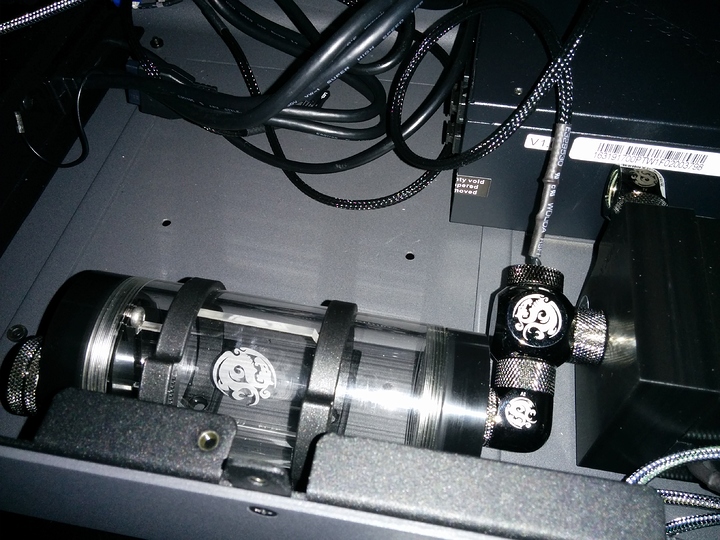 Quick disconnect is the fill port and on the bottom rez there will be a drain port. Started to mark up the panel in the front to create the through holes. I think I might do soft tube in the bottom not 100% sure if I will try and to hard tube down there or not but we will see.

The fan on the 120mm rad I had to cut the top left corner to make it fit, but it is still secured on that corner since I only had to remove 1 side of the plastic. 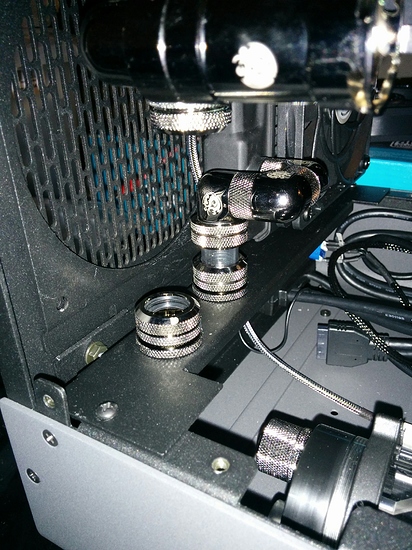 Holes drilled and 1 of 2 connections ran 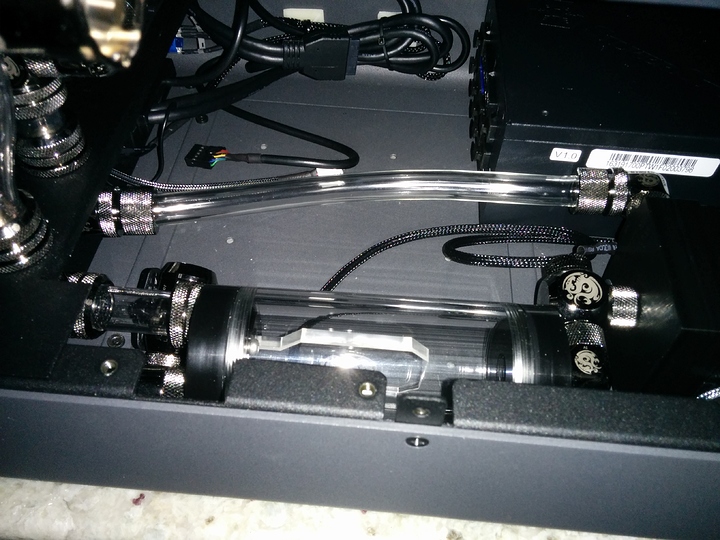 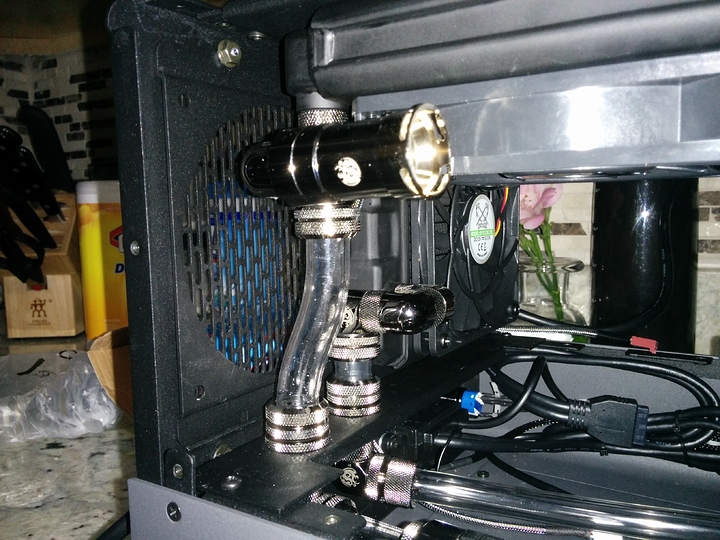 So looks like i will be using my old proxmox build for this for a little bit. Picked up the EKWB Nickel Plexi AM4 Water Block. Not to long ago I picked up a Samsung 960 evo 1TB , so mobo/cpu/ram will be temp until there is a good x370 mATX mobo and cpu will probably exist till zen goes to smaller finfet design. 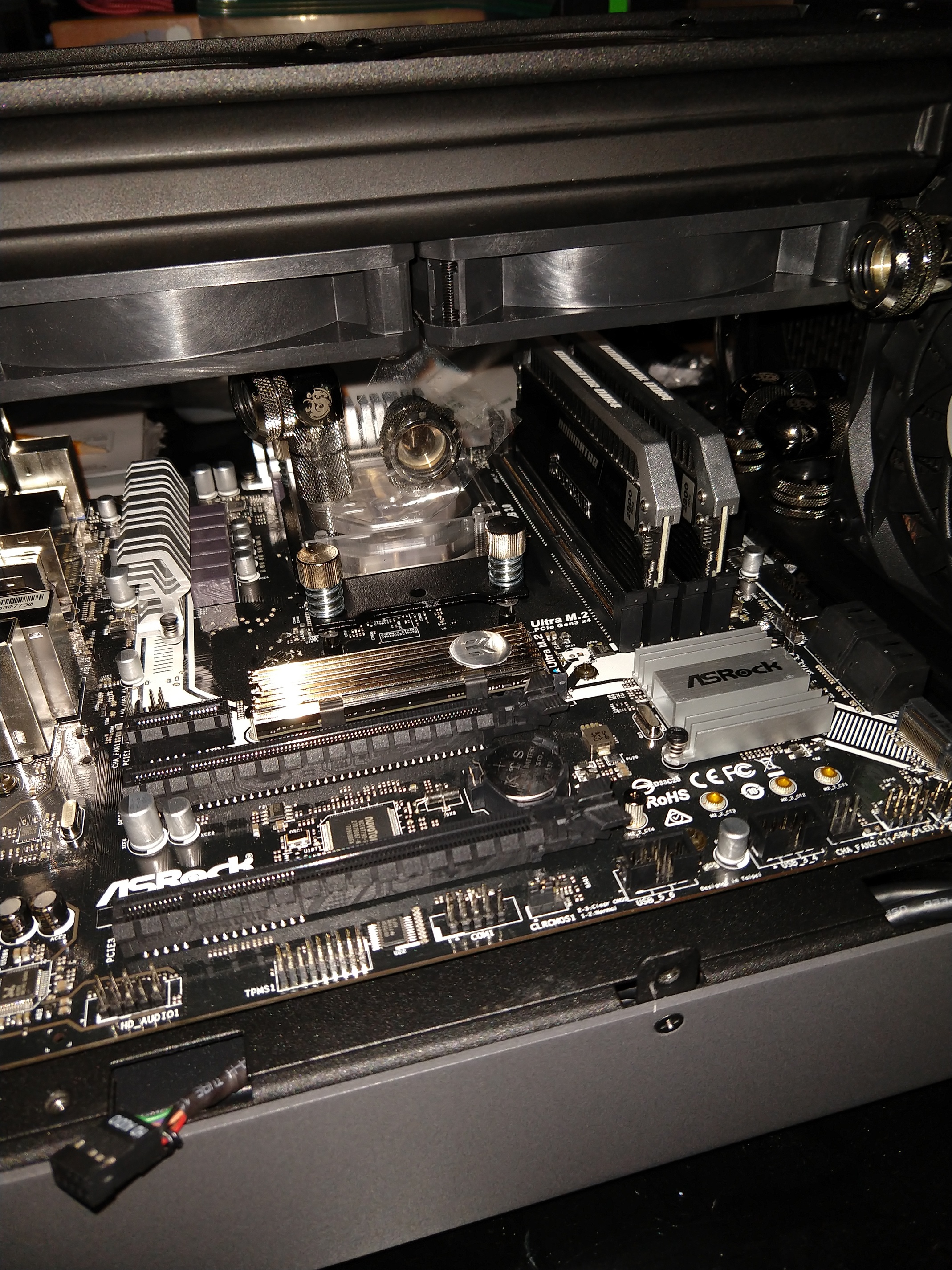 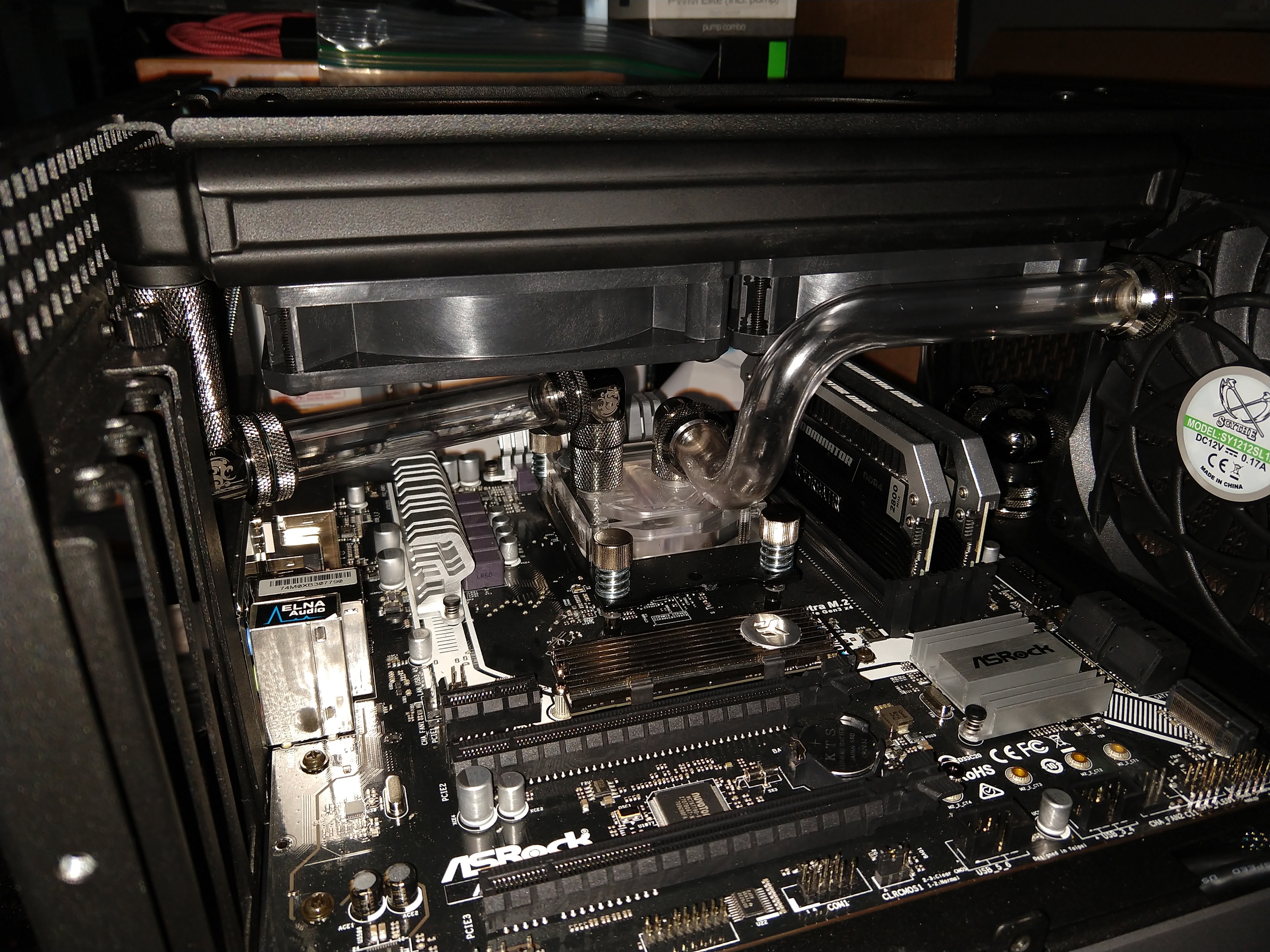 Just need to leak test and wait on power cables