Does anyone have a multi-CPU setup? WHen I was like 12 one of my friends got some sort of computer from his dad's work that had like 2 pentium 4's in it or something like that. Could have been a Xeon box too but I don't really remember all too well.

Can you do like a modern desktop with Dual CPU's? Would it be better to have 2, 4 core CPU's than 1 8 core?

I can imagine that would be an awesome rig but all I can think of for having Dual CPU's are the Xeon E5 boards right now.

I am by no means an expert or have even looked this up this is just from what I remember. I just don't expect there to be a homegamer type setup with dual sockets.

There are dual socket ATX (or E-ATX) boards. Typically used for workstations but there's no reason you couldn't use it for gaming. Pretty sure with modern intel CPUs you need to use xeons but there's nothing wrong with that.

I was wrong about ATX but here's one https://www.asus.com/Motherboards/Z10PED8_WS/

It is not just Xeons. There are multi CPU boards in the server market, as the others said. I have not seen such thing, but I have heard about quad AM3+ mobo, that basically cost as much as the high end Asus AM3+ boards. I can only dream what this thing and 4x8320e will be able to do in rendering and multitasking... Total of 32 cores, 32 threads, 400W of power for the CPUs only but God damn... Price to performance of this thing will be awesome...

I'm using a HP Z800 equipped with 2 x Xeon X5677 quad core processors. These are pretty much the same as the Core i7-9xx CPU's from the same time period (2010-2011) just before the Sandybridge processors launched.

This gives my system 8 physical cores and 16 logical processors (with hyperthreading enabled). The single threaded performance is probably a little better than an AMD FX-8350 at stock clocks but the multi-threaded ability isn't quite the equivalent of two FX-8350's (but is still a bit more than the latest i7-6700k quad core's).

For gaming it's fine with the single GTX 770 GPU installed. I have tried it with a GTX 970 and there is some benefit but that card does better with a single Sandybridge or newer CPU.

You can pick up older dual processor machines like the Z800 for reasonable prices on ebay. Are they worth it? Maybe, but if all you do is game, you are probably better off with a cheap new build system with an Athlon X4 860K, FX-6350 or Core i3-4370.

It's not really worth it. I used an old dual xeon rig for about a year for CAD. It was nice... I guess. But considering the age and wear on them, it wasn't all that good. They gamed okay, and did everything "okay". Getting an old rig really would not be worth it, the IPC improvements (and that other magic stuff) and power usage of newer chips is far more worth the money.

Can you do like a modern desktop with Dual CPU's?

I personally wouldn't bother unless you're running a small to medium sized business server. Sure it's a great practical concept in engineering and everything else, but in no way is it feasible for a mediocre desktop platform.

For concerns on the electric bill I would go with one 8 core and manually assigning the cores. For concerns about performance, two well cooled and overclocked 4 core processors will do just fine.

I was curious about Google getting their own custom mainboards made for dual and quad AM3+ socket mainboards a little while ago and this is the best I could find available. I already own one FX-9590 CPU at that price for the mainboard I'm tempted to buy it and another CPU so I can compare the performance etc. I have some dual CPU Xeon machines here I can use for comparison. I'd probably have an audience of 3 trolls for my efforts and two FX-9590's running at or over 5Ghz might open a portal to another dimension and awaken Cthulhu or something. 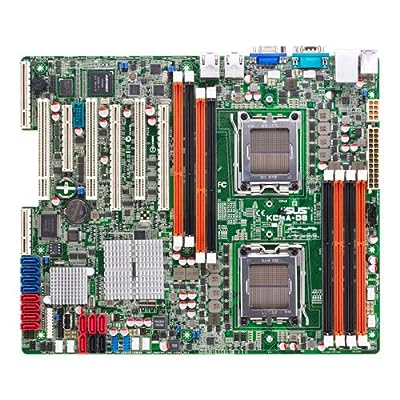 Your link without the referral:

ahh woops, I just realised it's not an AM3 mainboard, the description is just wrong :( so yeah opteron if you really want to do that

Dunno how cheap or if there's dual 1150 motherboards, from a quick google search it appears there's only 2011 dual CPU boards

Dunno how cheap or if there's dual 1150 motherboards, from a quick google search it appears there's only 2011 dual CPU boards

Your links without the referrals:

Doesn't that happen when copying a link from google or whatever?

So that will be ATX just even wider than E-ATX right?

Nevermind I can see that myself:)

My workstation has dual 2630v3s and it can game. Most games cant make use of the extra threads so a standard i5 or i7 at higher clock speed performs better most of the time but for productivity with video editing/compression threads are king.