Mpv cannot parse playlists... natively... but CAN with an ARGUMENT (WHAT?!?)

This is literally the stupidest thing I have ever seen a media player do UX wise.

The GUI for this CLI player supposedly accepts any input as a entry but the underlying CLI has a fatal flaw: INABILITY TO PARSE PLAYLISTS BY EXTENSION.

Will instantly fail as it’s not a “file” by FFmpeg standards. That’s fine for FFmpeg with ultra specific bash scripts, but we’re talking UX for a media player.

To ACTUALLY launch a playlist:

Which means the only way to launch playlists is by Terminal/CLI.

For custom URL protocols like a TV Tuner with:

This can’t be opened by the GUI unless you drag and drop selected text. (for instance, you type it into gedit or Kate, select the text, then drag it into the player.) The only other way to open it via a desktop shortcut is a shell script. If you’re in a DE, you have to use a shell script in order to actually directly launch a URL from a single shortcut or doing the simple act of getting a playlist to run.

This is one of the things that will prevent wide adoption of mpv because it’s meant for specific use cases and not general use. It’s great for looping a single file, but when it comes to pre-prepared playlists, this is where the UX fails dramatically.

Go grab the source code and fiddle with it. Not saying you shouldn’t vocalize your grievances if you dislike something; rather, it sounds like a good opportunity to make an improvement, if you can.

Not a coder, more of a UX person. I don’t know often how hard it might be to add or remove a feature, just saying what would sound nice in practice.

Maybe I’m misunderstanding, but launching an .m3u playlist via CLI works fine for me on Debian Sid. 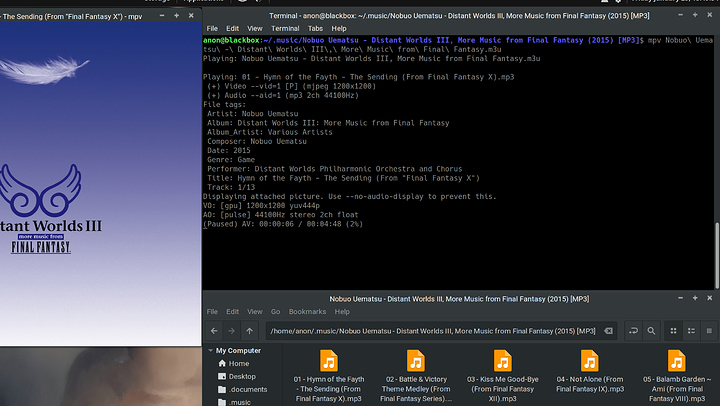 That’s weird, might be an upstream patch since I had this behavior on 0.27.2 (the version in the default Bionic repos, as anything newer causes GPU hangs on Nvidia)