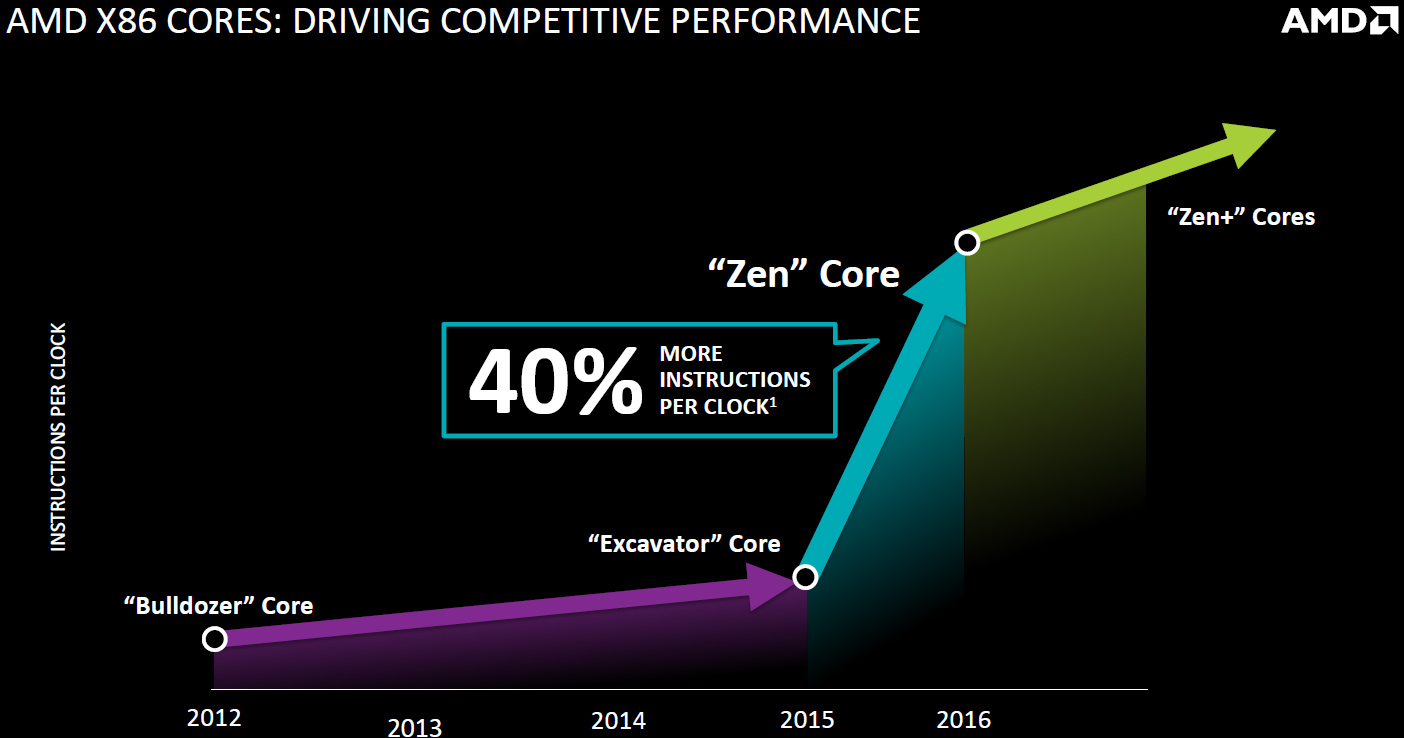 Advanced Micro Devices on Wednesday confirmed that its next-generation high-performance x86 micro-architecture code-named “Zen” will power its leading-edge microprocessors in 2016. The company also… 40% faster than 'buildozer' isent that much lol and it better compete with i7's or AMD is out of the CPU game..

Finally some official fucking slides. If it's 40% faster than Bulldozer than it'll be at best 10% faster than Haswell, which considering it's on 14nm is an expected jump. I think that 40% is a bit of a cherry picked number, but I want to believe.

@cooperman If it doesn't compete with i7 then AMD will continue to occupy the price/performance $170-$250 market. I don't know where this "If it doesn't beat it, then they're out of a job forever," mentality comes from.

It would be great if Windows could be programmed to use the 4 core ARM cores for simple background processes and the x86-64 cores for the heavier stuff.

Carrizo/excavator I think is their most current architecture right? And a good bit better than bulldozer. If so this would be 40% faster than that. Some guy on reddit did the math and it may be 24% better than sandybridge. If thats the case and the 8core/16thread is real I will so buy that and overclock the crap out of it. On 14nm they should clock nicely, that'll be nice for gaming and 16 threads will be nice for programming. Please don't let me down amd, if this come through you will have soo much of my money.

I'm going to repeatedly say this. I still believe AMD should of just Skipped Excavator. there was no logical reason to continue developing the Bulldozer/Piledriver based CPUs.. AMD admitted that Bulldozer/Piledriver was for all intensive purposes a failure. so why invest into it? after Kaveri, they should of just developed Zen based APU's just to keep them going for a bit for the mobile space and for the Desktop space. and to give people a taste of What Zen would be about. then next year, drop the FX Zen Processors. not make Excavator, and put those processors in, in what for all intensive purposes Overpriced Gaming Laptops, that no one buys..

I think they wanted zen on 14nm, they kinda had to wait for that. In the mean time they had to put something out.

that's true, but i still feel AMD should of made a new architecture ages ago. not continue to thrive on the dead horse that is the Bulldozer architecture. regardless of nanometer process. or at least go down a bit to 22nm. and not wait tlll 14nm. sure the performance delta is going to be MASSIVE considering they are going from 28nm to almost damn near half which is 14nm. but waiting is only hurting them. ESPECIALLY if Zen doesn't live up to the hype. which personally i think it will, considering Jim Keller is back. however it will be sad, if the 8 core parts are competing with Intel quad-core parts.

Price wise I expect them to compete with them, but performance I'm really not sure I don't think it'll be i7 but better than i5. They did fuck up big time, but thats the past now we can only look to the future and hope.

I doubt it will be that bad that a zen 8 core 16 thread part would be competing negatively with a i7 quadcore except in games because well you know the situation with games.

Anyway its hard to judge anything from these types of slides.

Anyone remember the days of the Athlon 64 FX-51? It's been a long time since AMD had a real competitor. I doubt the Zen core will make much of a difference. This is my last year using AMD unless Zen turns out to be amazing.

40% from excavator, which is what? Remember there is steamroller and excavator in between zen and bulldozer. Steamroller and Excavator had I believe 10% increase in single threaded IPC each (multithreaded IPC saw much larger gains) but suffered similar decreases in clock speeds...

So we have 1.1^2*1.40=1.694% of the singlethreaded IPC performance of bulldozer. Which roughly put it at 85% per IPCC (instructions per clock per core) off haswell (assuming multithreaded performance parity, but double core count). People are suggesting skylake=20% ipc gain?? That means .67% of IPCC of skylake... Not good...

If skylake is more reasonable like 15% IPCC, then performance of zen=.714 IPCC, with total multithreaded performance approaching 2x skylake. Ofcourse this is based of rumour mill soo... And got to see what clock frequencies we are going to be getting out of these 14nm cores and pricing and whatnot.

I think I would settle for slightly lower IPCC for DOUBLE THE CORE COUNT, and non segmented (better feature set, for CPU features) assuming they can clock up comparably or better.

I was referring to games. In multithreaded stuff I don't think the i7 can really win against that as is.

I think I would settle for slightly lower IPCC for DOUBLE THE CORE COUNT, and non segmented (better feature set, for CPU features) assuming they can clock up comparably or better.

I would too. Especially if it over clocks well. All I need is for it to match my 2500k per core and give me 16 threads and I'll be happy. Granted neither of them are out so time will tell. I really hope both are good.

TLDR, maths: Remember total performance of current FX line is still sort of comparable to non-overclocked intel parts in many workloads, if we see these multiplicitive gains hold true, then we are going to expect much higher total performance, as much as perhaps 85%.

I think the thing is that as long as AMD has 8 REAL, BIG, SMT cores we are going to see much higher total performance than intels quad core offerings, even if per clock, per core they will be slightly lower! The deciding factor I think is how close the IPCC gets, and what the frequencies and yields will be. That and marketing hype...

Unfortunately looking at marketshare charts, even when AMD has some real good offerings, performance wise, price to performance wise, or even both, even when they keep the same sockets and whatnot, you see there market share stay stagnant at best, decline at worst. Its quiet unfortunate, the 290s for instance were frequently near 1/2 price of 970s whilst 970s were all sold out.... The 290s were really decent.

the 8320 even already does better under multi threading than the i5 haswel. If the 8c/16t parts cost decent then those of us in the know will be going amd for anything multithreaded. Gaming will remain to be seen, but man I'm so excited for skylake and zen next year I can barely contain it.