This may not actually be the appropriate category. If not so, I do apologize.

To get to the point, I’m on the lookout for a monoblock for the Asus ROG Strix X470-I Gaming, as I do expect the VRMs to have heat issues without active cooling, due to extremely limited airflow.

I’ve been in contact with EK Water Blocks, in regards to their EK-FB ASUS Strix X470 RGB Monoblock, as the layout of the ROG Strix X470-F Gaming, for which it’s intented, seem very similar.
Of course they just referred me to a list of compatible hardware, with no further comments.

I am half tempted to just take the chance, but as it is rather expensive, I thought I’d ask for some advice first. Perhaps someone has actually had the opportunity to compare the two boards, or perhaps there are alternatives of which I am unaware.

Edit:
After further investigation it is now clear that the monoblock in question will likely not work.

Here’s my 2 cents. If you do decide to take the chance…Order from someone you can return it to. I did this with the Vega 64 at launch. My XFX card was not listed on their site. And there was rumors that some of the reference cards had custom PCBs (ridiculous but still worrying). It turned out for the best and it worked so they updated their compatibility list.

Now Looking at these two boards on their site. I would say it wouldn’t fit. I have the x470 in my personal computer and when I get home I can upload pics if you needed more reference pics.

It has of course been difficult to say the least, to find images suitable for a proper comparison. Perhaps I should make more of an effort.

For now, thanks for the 2 cents.

So here is above the top VRM heatsink. Reason I don’t think the block will fit your x470-i is yours has fan headers and the RGB headers up here. And On the block you want its actually cut out around those two 4pin fan headers on the x470-f upper right corner. So I imagine the block would interfere with those headers.

Also if you look at where the chokes are they are completely different on the mitx board. Caps look bigger aswell. Uploaded a profile shot of the board. JPG compression is a bitch, but should be a closer reference than the asus site. 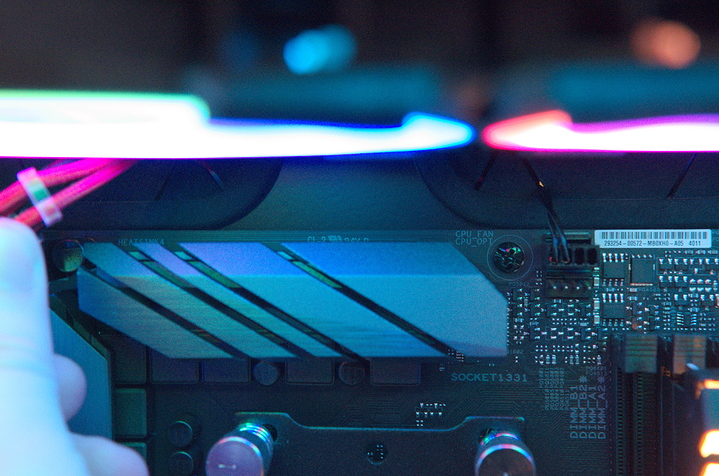 Yes, as I wrote in the edit, this became clear upon further examination. It does rather bother me, but what ya gonna do?
I suppose it is possible to make some sort of insert, to divert some airflow to the vrms, or perhaps it won’t become the issue I fear…
Only time will tell.