hi I'm planning on buying a dual monitor setup... but I've noticed alot of 3 monitor setups with a 27 middle and 2 skinny. I really like that setup but I have a glass desk and would like a desk stand... but I just can't figure out what monitors would look sexy together.. I'm hoping for a 1440 middle and 2 1080s on the side.. if anyone has a monitor setup that they would shair that be so awsome!!

In addition what do you use your PC for?

And what's your GPU? What's it's display outputs? You should probably get monitors with display port for easy of use

And I'd say stick to triple 1080p because then you can use it for the occasional super wide screen game, and it'll be cheaper and just as effective, in addition it'll be easier to mount and set up

I use my pc for everything mostly gaming and streaming. I currently have r9 380 but I'm upgrading to 2 rx 480s once nitro comes out... I got like a 600-700 canadian budget for monitors

@FightMeIRL
Depends, do you care about triple monitor gaming? Otherwise what's the korean monitor situation in canada? looking at the PC part picker, fiding 1080 displays with display port might end up being a pain

for the triple set up anyways monitor selection on the PC part picker is weak, there's this 1080p 75hz display with display port, but it's sadly TN, although if it's like the 144hz model it's actually not too bad despite being a TN display

what is free sync? I'm new to monitora always used my rca tv but people been saying I'll have a better experience using monitors

It just smooths things out mostly

Anything is probably better than an RCA TV, also 75Hz will be a bit smoother

only downside is TN doesn't have perfect viewing angles, although that TN panel should be a fair amount better than a standard one

yeh I'm canadian so it's hard to find monitors here... I was looking at the benq 1ms 24 inch but I think I want to a 27 as a main I see going from a 32 inch tv to a 24 will be 2 much of a huge change. but I think I'll just get 2. I mostly wanted a portrait for my streaming software and chat aswell as to have runescape logged hence why I wanted 2 of them o the side

Late to the thread, but I'm going to chime in since I'm a glass desk user:
First thing to watch for is the amount of weight that you're wanting to put on the glass desk.

I was really concerned about the amount of weight that I was putting on the glass desk top especially since I'm using a large 43" 4K monitor. Adding to the weight on the desk is the tempered glass adjustable 'TV stand' that I'm using instead of the two small metal feet that came w/ the monitor. (picture below) 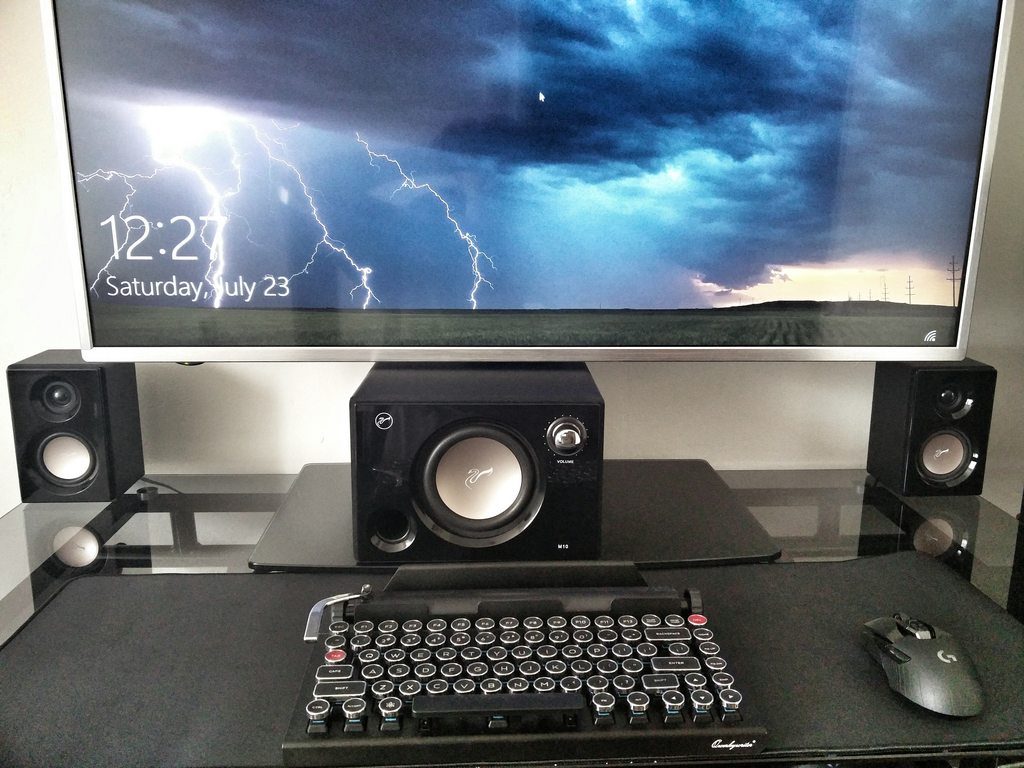 Even though the glass top is rated for 100 lbs I made sure that the CG (center of gravity) was over the metal frame joints underneath the glass top. So far it seems to be holding up well, but I'm still considering wall mounting the monitor just to be on the safe side.

I don't know if setting it up as a single large display in the GPU driver software works, but if you try to use say youtube in portrait with a 1080p display and some other websites, it doesn't scale properly and you can't say read comment notifications with it

Oh ok. I see what u mean I just saw a really nice 3 monitor set up and it looked pretty clear

If you want a portrait display for say ebooks and comics, then dual 1440p is the way to go, but overall, I'd probably say triple 1080p > 1440p for me at least, the option for ultra wide gaming is neat to have vs more pixels, canada pricing/avalibility makes it a bit weird though

it's mostly also going to be best to have a triple display port card, and make sure they're all display port, like that free-sync display linked above, free-sync being a nice bonus

the 480 nitro only has 2 Display port, you can still use all 3, but if you want free-sync + surround you need a triple display port card I'd imagine

Power Color has this beastly 480 announced, although it's overpriced unless it's near guaranteed to hit 1400mhz, it has triple display port
http://www.guru3d.com/news-story/powercolor-radeon-rx-480-red-devil-edition-officially-announced.html

That's the 1440p 144hz TN free-sync display right? If you were planning on one portrait TN is a bit of a pain to work with

Or were you only going to run one for a while?

IPS version on the US part picker
https://pcpartpicker.com/product/sqp323/acer-monitor-xf270hu

Also this thing just came out, pretty small free-sync range though, but it's easily the cheapest 1440p 144hz IPS display

I mostly just use it for monitoring programs and chat room software. So for me it works great, but it depends on what you want to do. Might not be ideal in OP's situation. Just thought I'd add my 2 cents.

thaat looks really nice.. I might just dual setup that.. unless the portrait sucks on it? I just dunno if my desk can handle my pc + 2 27 inch monitors