So I noticed here lately my DSL modem sending packets constantly to one of my linux machines.

If i reboot it. it’ll go away for a little while. 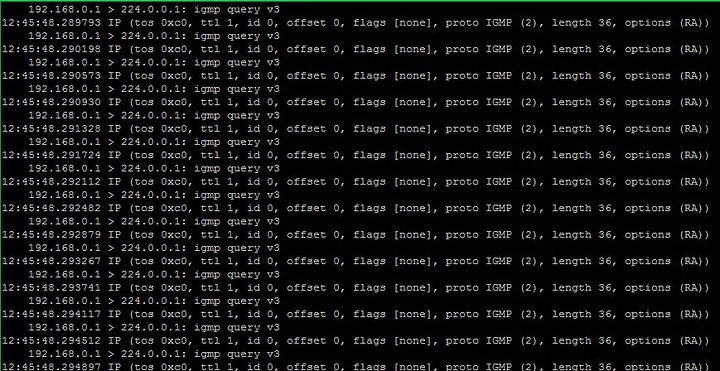 redownloaded same firmware and “upgraded” to it…

once it hit this part… the igmp flood stopped…

It was flooding at various times and strengths…

224.0.0.1 is a multicast address. So the router is not specifically sending the requests to this one machine.
It’s simply broadcasting them to the network.

IGMP is Internet Group Management Protocol and is a form of one to many networking (like video streaming).

What is going on is that device is trying to establish an IGMP group to what can accept multicast addressing stuff.

Multicasting has various uses depending on the specific address being targeted. For instance establishing Open Shortest Path First (OSPF) and Routing Information Protocol (RIP) connections. Think of it as shouting into a room asking for a screwdriver rather than going asking everyone in the room individually.

It is normal for IGMP requests to come in small bursts (in my experience and what I understand of the protocol) however storming of it can cause network availability issues.

Are there any services running on the Linux box that operate using multicast that maybe causing the device to send these requests?

Are there any services running on the Linux box that operate using multicast that maybe causing the device to send these requests?

What I meant is, are there any services on the Linux box that would kick IGMP into motion from a routing device. In this case the router. Bind shouldn’t unless you are supporting mDNS (but that would defeat the purpose of the DNS server)

Personally I wouldn’t worry about it. As IGMP is part of normal network operation. The only time it becomes a problem is in a scenario (for example) where you get multicast storms caused by say spanning-tree flapping.

First off: Check your network for loops. Check every single cable, and make absolute sure there is nothing connecting a port on your switch or your router’s LAN-ports, to another one on the same device. And confirm that there is only one cable connecting your router and any switch.
(There should essentially be only one path through your network.)

The only reason I can make this shot in the dark, is that I vaguely remember having seen something similar before. Take a look at the timestamps. I can’t really give you anything else, as you haven’t really supplied much useful information.

It generally isn’t a joy to answer questions, without relevant data. It feels like answering some nebulous riddle, with your self-esteem on the line.

Some pointers to details that might be of interest:

Gather some data → search the web to sort out what’s relevant → use that information to gather more of what’s relevant, and analyze it → comb forums for similar issues and build some basic understanding.

But if you still haven’t found an answer:

You can now try formulating a constructive question while considering what data you should provide → precise language and relevant data is imperative, and keep in mind if you are actually paying someone for their service or not → any answers that contains information that is new to you1, should never be dismissed without thorough consideration2.

If the answer did not provide you with enough information to fix the issue: Repeat second section until solved; dig deeper on your own/educate yourself; consider that there might be a bug somewhere; or give up. Though I generally don’t recommend the last two, unless utterly exhausted.