I recently started playing WoW again and while the Logitech G502 is okay, it's not my ideal mouse.
The problem starts with my keyboard (a Sidewinder X6): the macro-buttons are awkward to reach and I can't press the number button row without looking at them, which is pretty annoying during a fight (1-4 are kinda okay, after that it's meh). So I wanted to bind the keys to my mouse buttons but that's the actual problem: the mouse is not made for fingertip grip users with medium/small hands. When I grip the mouse as usual I can't reach the all of the extra buttons, using a different grip feels unnatural. I effectively move the mouse only with the tips of my thumb, ring finger and pinky, the index and middle finger rest on the left/right mouse buttons.

I already watched Logan and Pistol's vids about the Logitech G600, G600 vs Naga, and UtechSmart Venus MMO mouse. The G600 looks the most promising in terms of quality but the ring finger click is a no-go for me and it looks quite bulky. The Naga is....well, I'm not too fond of Razer's products and the prize is quite high (80€ and higher). The UtechSmart's thumb buttons are - according to Logan - quite hard to press; that's not good.

Other - obvious - alternatives in terms of "MMO" mice like the Corsair Scimitar (not available yet but the thumb buttons look too plain and easy to press the wrong one), the Roccat Nyth is out of my budget with ~130€, the Cyborg/Madcatz M.M.O. 7 looks quite unusual + out of budget (friend of mine has the R.A.T. 7 and he's not happy with it, too much squeaking, feels flimsy because of all the adjustable parts), variants of the UtechSmart Venus are basically the same (Lioncast LM30, etc.), the Steel Series WoW mice feel cheap in general (tried them out at an electronics store before).

Do you guys have any recommendations/possible solutions you can provide?

I don't find the Utech Venus's buttons too hard a press once you get used to them, it's more of a good thing really so you don't accidentally press them, overall it's probably the best option.

There's not too many options in the 12 button mouse realm, there's the Roccat Nyth, which is highly adjustable but expensive

There's also a steel series one I believe that has like a snake of buttons on it, never tried that one, well this one doesn't have a snake but it does have 4 buttons 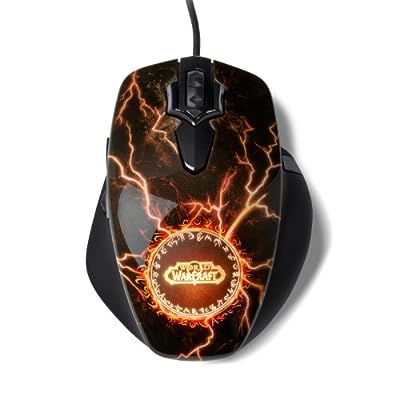 The SteelSeries World of Warcraft® MMO Gaming: Legendary Edition brings both Mac® and PC players a comfortably shaped and easy to configure mouse that can enhance their gameplay. The mouse features 11 ...

There are quite a few variations of the UtechSmart's chassis (4 different colors and then brand variations like the Lioncast LM30 and the Tacens Mars MM4). All feature the same chassis and 16400 DPI. That made me a bit suspiscious in regard of the actual quality. Also, none of those brands are well-known (not even in the sense like CSL, one of those cheap "you get what you pay for" brands).

The Roccat Nyth is not really an option. 1) the price, 2) before the G502 I used a Kone Plus, which is also not ideal for fingertip-/claw-grip and more on the heavy side. The customizability is nice, but that doesn't justify - IMO - the price.

Yep, that's one of the 3 Steel Series WoW mice I tested (the other ones are the wireless version of the one you linked to and the older, even bulkier one). The buttons were really flimsy/squishy with an undefined actuation point. (the price is nice, though)

My venus lasted me a good 2 years before it started getting some tracking issues and I'm not even sure if it's the real issue.

Basically it would just stop tracking or changed dpi to something really low on random, but the other mouse I had plugged in would work fine when it happened.

That's unfortunate. My Kone Plus had tracking issues too at the end, but it lasted more than 4 years (bought one of the first charge and luckily didn't experience the wheel issue, lots of them would break the axis).

In terms of ergonomics the Naga looks like it's most fitting for my grip but I really really really don't like Razer :( Guess I'll have to bite the bullet on this one. Not sure if a Hex will do, though. Might need more buttons when I get used to them.

The hex button press is also a bit too light for my tastes, I had a pre 2012 naga that I used for a number of years with no issue, I really prefer the M4&M5 placement on it, it was just off the left click so it was easy to get to

I find it a bit disappointing that Razer went away from the exchangeable contour pieces for the ring finger/pinky with the new Nagas (Epic Chroma and 2014). The concave shape of the thumb buttons looks like it's better accessible for the thumb. According to Linus's unboxing video of the Naga 2014 the thumb buttons are also way better.

Forgot to ask: how big would you say are your hands and what grip do you use? (regarding the UtechSmart)

My hands are fairly large, and I palm it mostly

Do you think it's possible to claw / fingertip it with smaller hands than yours?

Probably, kinda hard to claw grip a 12 button mouse though

The Naga Hex could work since it has a free spot in the middle of the thumb buttons. But 80€ for a mouse and Razer too....idk.
Could order it from Amazon (the regular Naga 2014) and send it back if it doesn't work out with my grip. Even if it's a right as a customer, I don't like doing that.

btw, ended up with a Naga 2014 but will send it back and get the Naga Chrome as soon as it's available (and Razer's support is terrible, good thing I bought it from Amazon).

Totally agree on Razer support being terrible, it was like I spoke another language when I was explaining an issue with Synapse. I ended up just deleting it & running it on standard drivers after not being able to get a straight answer.

Nice! The Naga 2014 is great so far (although I kinda wish they didn't remove the exchangeable pinky-rests). The thumb-buttons are easy to press, but not so easy that I accidentally activate them (I can even lift the mouse with my thumb, ring finger and pinky without pressing a thumb-button). The Chroma seems to be the exact same model as the 2014 but with RGB being the only difference.

They weren't even able to answer a simple question. Before I bought the Naga 2014 and before the Naga Chroma was announced I asked them if they had plans on releasing a Chroma version of the Naga. Answer was "we're the tech support and have no infos on future product releases". No "we have no infos on this but let me forward you to a different department" or "we have no infos, but you can ask this support department [insert mail-adress]". Nothing. Bought the Naga 2014 only to find out a week later that the Naga Chroma was announced. Mailed them again, got my "case escalated to a specialist". Only thing I got so far from that so-called "specialist" is a guide for RMA-ing my mouse (which can only be done if it's defective and that's not the case).

Amazon on the other hand was like "no problem, you can return it until January 31st 2016, no questions asked. all wear&tear is covered by warranty, so don't worry about it".