Sold my ID80 a few days ago and got a bit of change burning a hole in my pocket, so i got some components and built this: 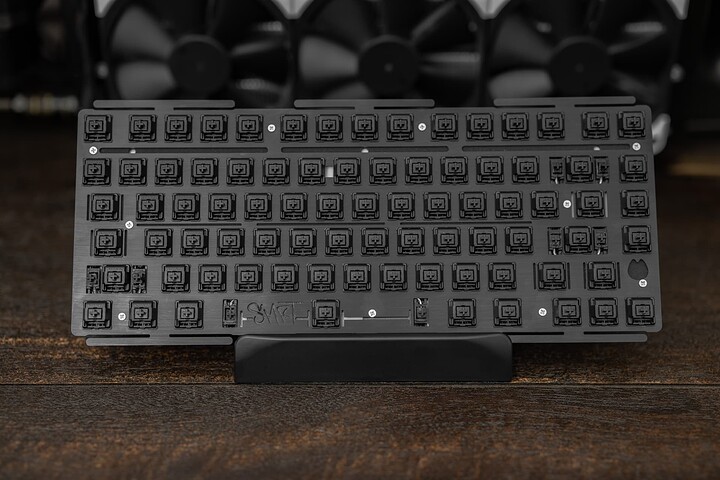 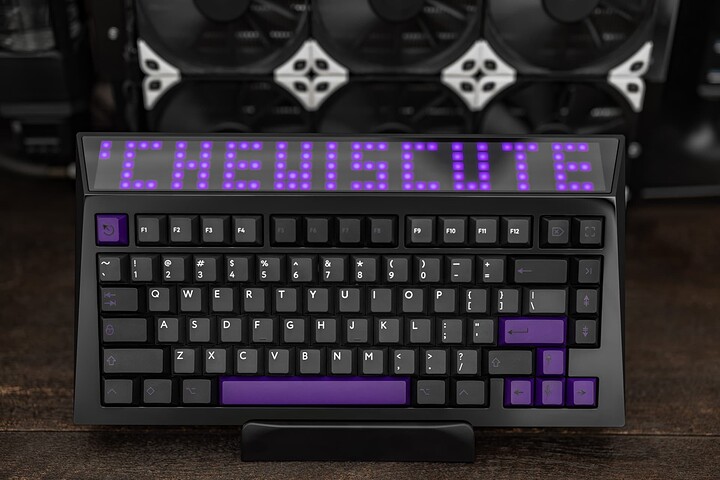 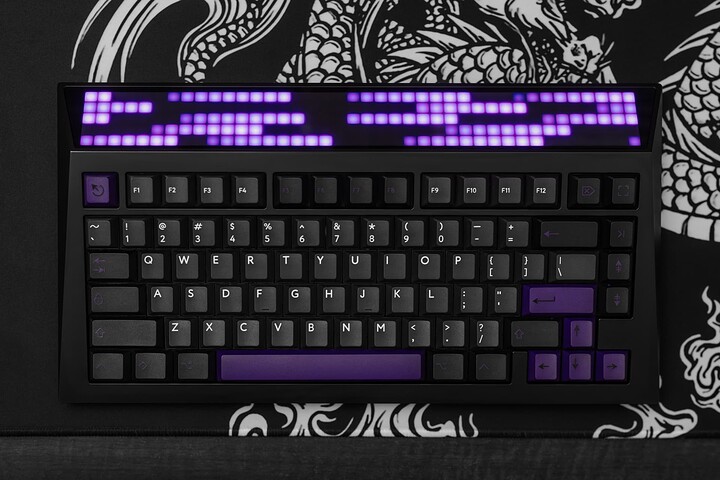 I didn’t take a ton of pics because I was very soured by the buying experience. There was almost no enthusiasm left by the time it was in-hand. Shipping was almost $100 and they used 4PX. So it took 2 weeks for the board and 4 weeks for the extra plate. During that time it was a pain to keep track of the tracking numbers because they expire if the main courier doesn’t get the package within a certain time period. So I had 5 or 6 over the course of the whole thing. Then when the plate showed up, it was missing the gaskets. Something that would not have been a problem if they were installed on the case in the first place. Luckily I was able to use some patience and a nylon razor to remove them w/o tearing all but one. You figure with its positioning as a premium product (and the price), they could throw a spare set of gasket strips in there.

Now that that’s out of the way, I have it built and it’s actually nice to use! The LED panel is impressive in its own right. Typically when I shoot the way I normally do with strobes, I have to turn them WAY down so they don’t wash out the LEDs. These are so bright that that is not a problem. I keep them on the lowest setting when in use so that I don’t have reflection back into my monitor.

The board doesn’t support QMK due to its uniqueness. Their software is clunky and I’d rather not have to use it, but at least you don’t need to keep it running. It’s just a flash and dash type deal. All-in-all, I maintain that it was a stupid purchase, but an excellent conversation piece. The PVD mirror coating is a nightmare to keep smudge free. I have a client that is going to treat it with some industrial stuff that’s used in high end installations to resist finger prints. Glad he’s doing it as a favor.

Would I recommend this board to anyone else? Absolutely not.
Is it pretty cool? Yeah. No regrets here.

Finally got around to putting low profile gateron clicky switches into the TEX board to replace the low profile Cherry reds they use for the mouse buttons.

Hot damn, just got the email the qk65 is shipped! Damn… I can’t assemble it till way later this year…

Nice! Similar - mine shipped on the 27th, and just hit US customs yesterday. I don’t know if I’ll be building mine right away, or waiting for a bit like you. I don’t know switches I’ll go with just yet. I don’t even remember what my plan was, but I think I was going to use the silent Alpacas I already have.

Fingers crossed that DHL doesn’t lose this one.

Made it through customs without any hold ups:

It just got dropped off by USPS. Just some quick potato cell phone photos : 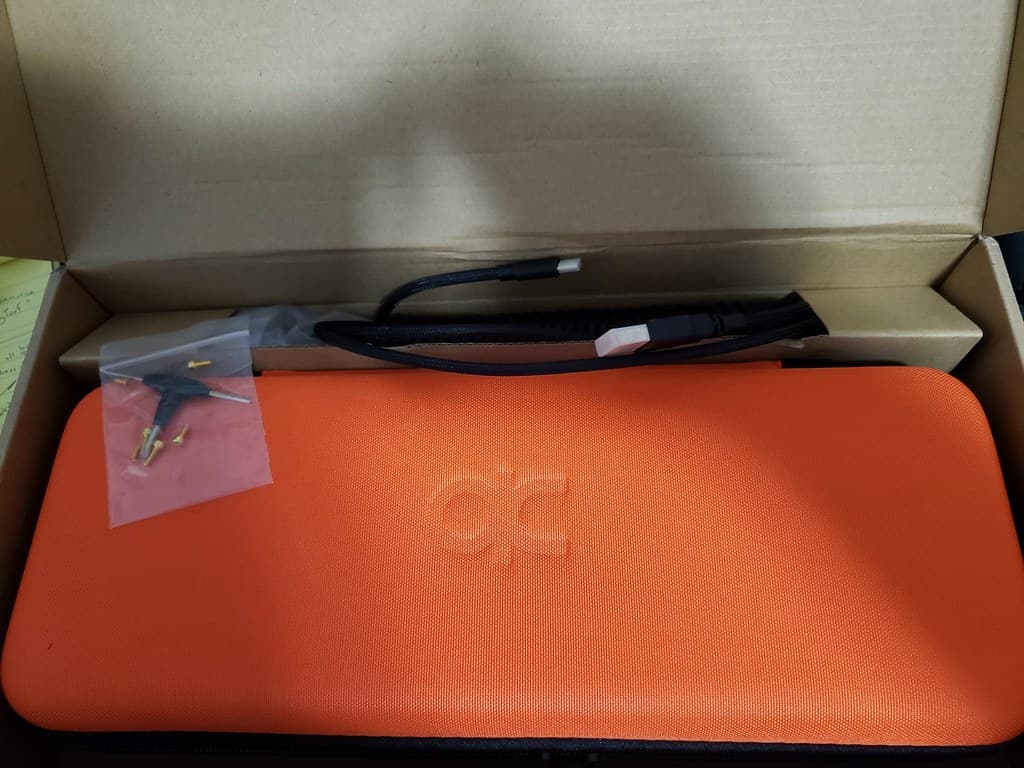 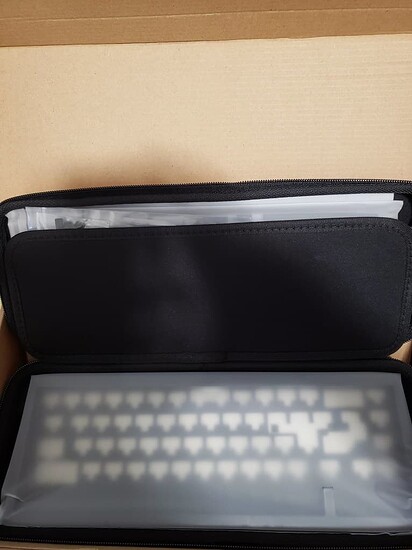 Well its closer… But still not right. Really kicking myself now. Just noticed of all the blank sets, the “black” dark grey set is The Only One without stepped caps… Balls.

I think the dark grey is still too dark though. I will probably go back any gwt the next lightest shade, which does include stepped caps too, ugh hate myself, which would be much closer to *Hyperion 1’s" dark grey which is what i intended originally. 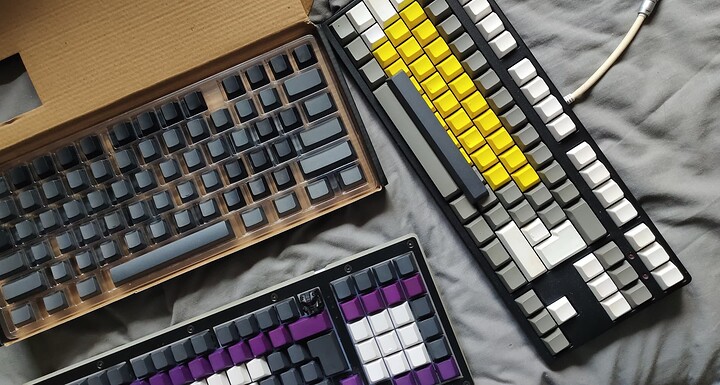 This keyboard is unsellable, so i might as well use it. 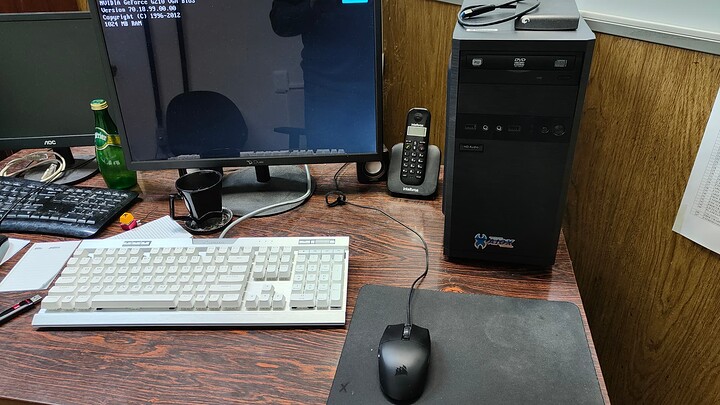 So jelly! Mine arrived too but I can’t even put hands-on until late this year… 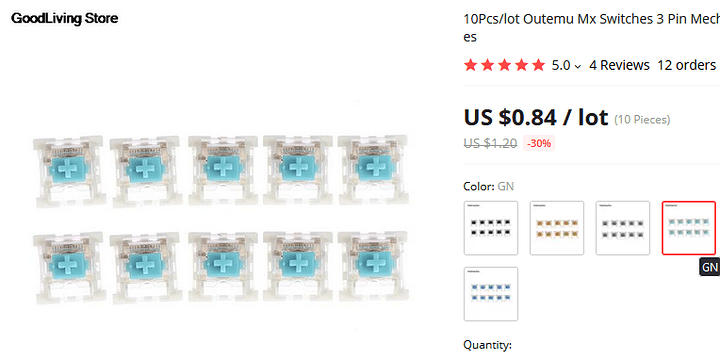 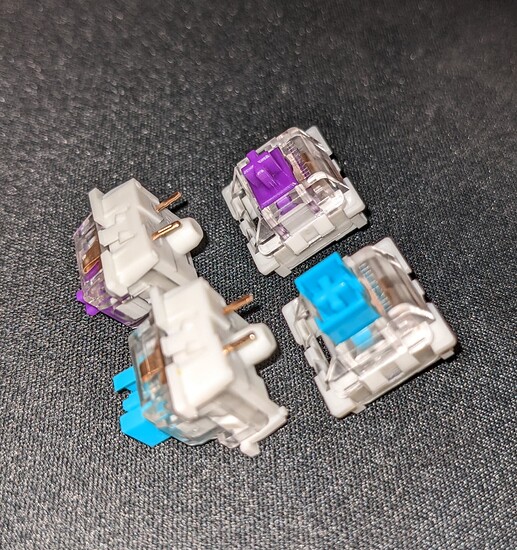 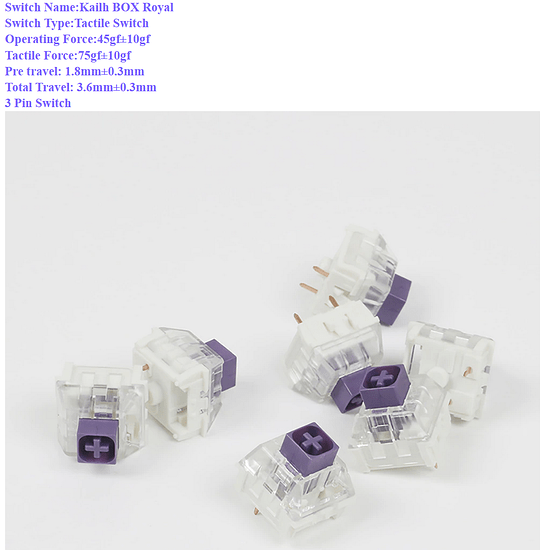 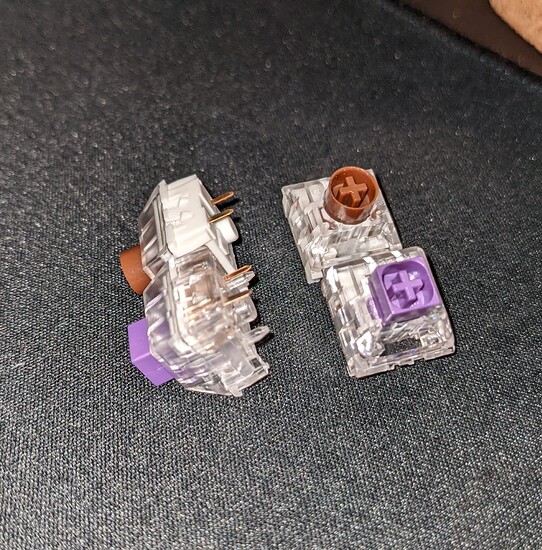 I currently have the HyperX Alloy Elite. Not sure if it was worth the price I paid, but it’s a pretty nice keyboard. I’ve been thinking about getting another keyboard and using this one when on the go or for a secondary computer.

I’ve been looking at getting the EVGA Z20. It’s cheap, has programmable keys, has a volume roller, is optical meaning it won’t double press and will last longer, and overall looks like a nice keyboard, especially for the price.

However there are a couple things that I worry about, I have the Z12, the non-mechanical cheaper version of the Z20, and I use it on a secondary system. I accidentally hit the side e keys instead of ctrl, shift, etc quite often, and I’m worried that I might do the same with the Z20 since those are so close to the main keys. I’m also worried about why it’s so cheap. It seems that nobody is buying EVGA keyboards, and I have no clue why. Is there some sort of issue or defect or problem and I just can’t find anything about it? I don’t get it. 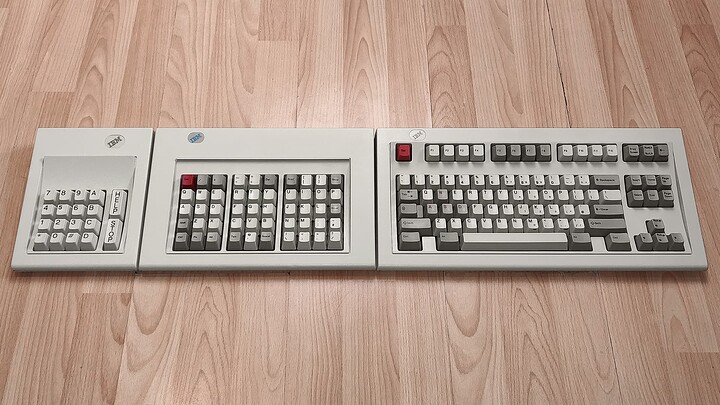 I have recently bought a HyperX keyboard with the long name Alloy Origins Core Aqua. Which means, TKL with exposed tactile switches and ABS keycaps. The frame is aluminum. The cable is braided, detachable Type-C.

All in all I am happy with my purchase. I’ve used it only for a few days, but after the switch from a cheaper linear my accuracy has improved and I feel more confident while typing. The tactile bump is less pronounced than in the clicky switches I have had experience with. But it is enough to make a difference for me. In gaming I don’t really notice it and I do not miss the linear switches. The stabilizers rattle less in this HyperX board than on the SPC Gear ones I have owned previously.

In stock form the keyboard is way better than my old ones.
I will put my PBT set on it, once I clean it. And add O-rings.

Software wise it is not a tragedy like people on reddit make it to be.
You can install it from an .exe file (you don’t have to use the MS Store). You can save your configuration to the keyboard itself and you have 3 profile slots. The software does not need to be installed on work machine to control the lighting (looking at you, rainbow-puking Razer mice).

ok, so maybe a bit nitty grittier than people are familiar with here, but I have a thermaltake Poseidon keyboard. Cherry blues or clone.

Keyboard has been fine but lately i’m having issues with debouncing (some keys register twice, sometimes, maybe every 50th time i hit the key) and some keys (r_ctrl in particular) i have to smack the shit out of to get the key to register once or twice then its fine for a bit.

a bit of background - i did mod the keyboard at one point. The keyboard has a on off toggle to enable/disable the windows keys, i got annoyed, drilled a hole in the top of the case and ground down the top of a round blue LED flat and piggybacked it across the toggle switch to make a “the windows key works as expected indicator light”

I have since removed the LED as it was bright AF and i just make a note to never touch that switch ever.

Think the LED mod has worn the resistors (all over the back of the pcb at or near every switch) that either are used to calculate keypresses (adding up resistance on address lines on the controlller) or possibly acting as a debouncing filter?

Should i just go reflow everything on the board out of paranoia or do i need to test the ~100 or so reistors?

I keep the board clean, no gritty/gummy/crunchy keys.

Welcome to the league of distinguished gentlemen. 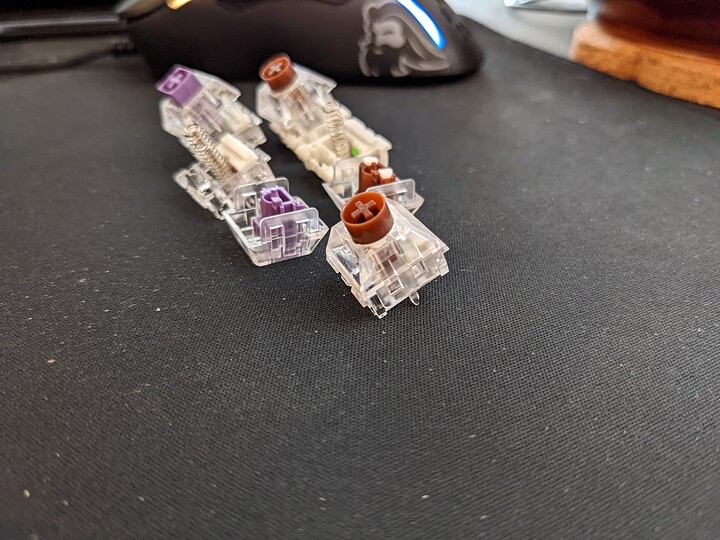 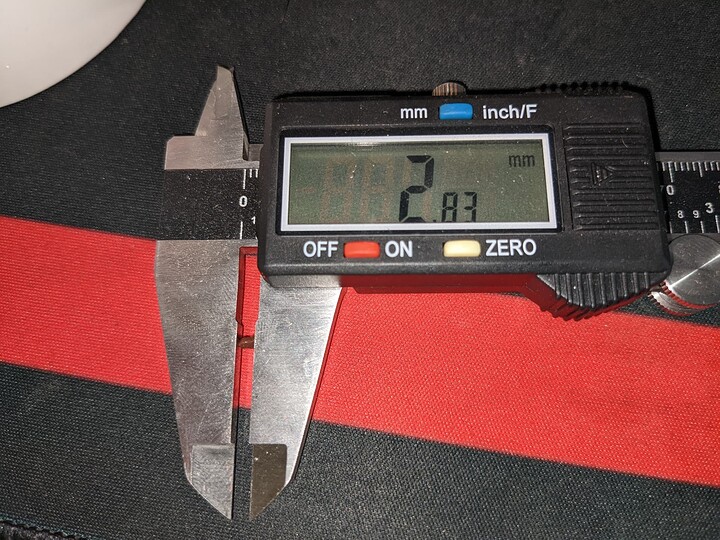 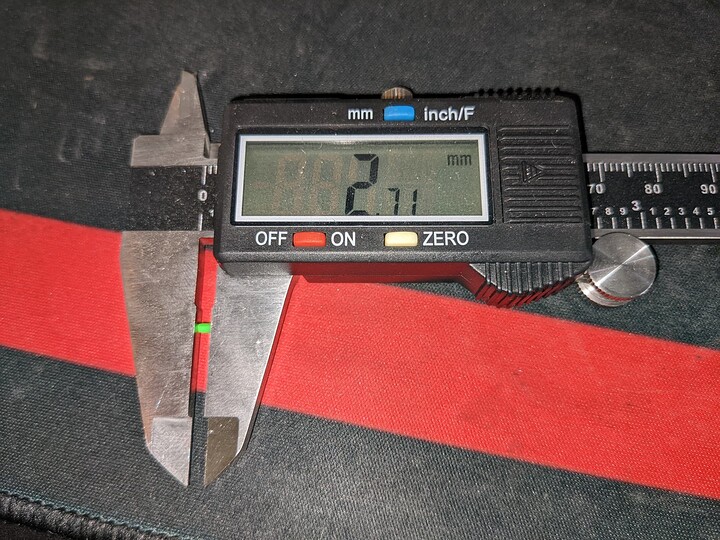 Started to combine my box royals with my silent browns. Now I have a nice big bump with a stronger spring. And by keeping the silent nub the sound profile is nearly unchanged.

What!? Keycaps with the letters binary? 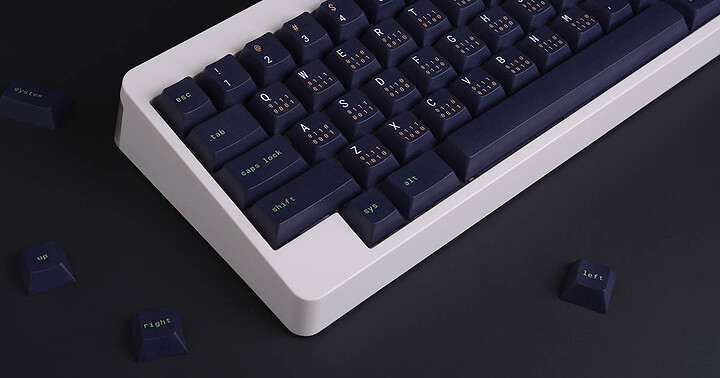 Introducing qPBT Terminal, the first keycap set from EqualPBT! This keycap set is an in-stock product, and provides great value through its extensive base kit! 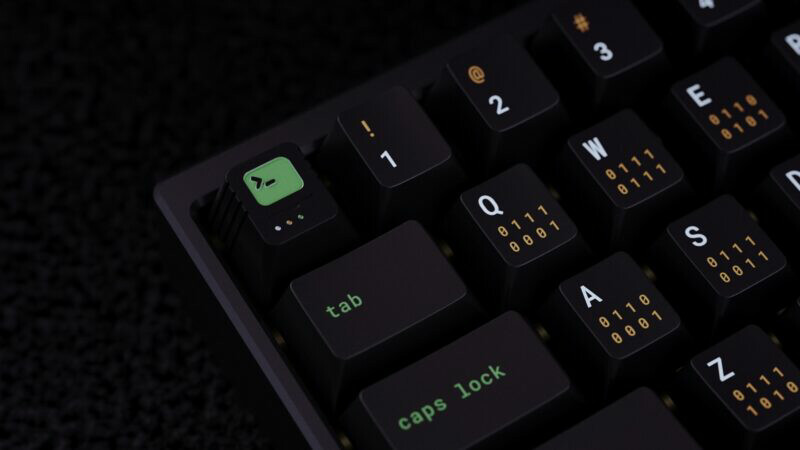 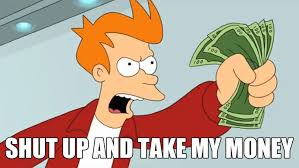 I dont know why but ants are eating the foam and padding of my Ducky 3. 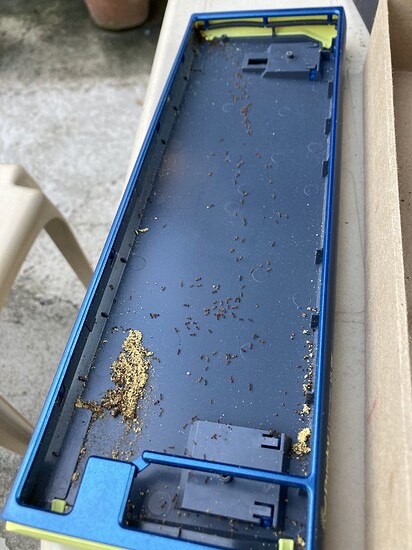 I had to buy an air duster. So now the acoustic profile is no longer the same but at least ants arent biting me frequently.

I also was tearing down the switches wrong, force popping the switches off laterally left and right. Turns out there is a proper latch in the up and down position. There were also two somewhat “impossible to remove correctly” screws in the right side of the keyboard hiding behind the plastic housing.

Anyway, I managed to remove it by carefully, or rather, forcefully pushing the obstructing plastics away.

In the end, I managed to remove the offending foams and pads. Since then, no more ants under the keyboard.