Mastodon: not the band, but a free, open-source decentralized Twitter alternative

that's about the size that diaspora got iirc.

according to their same data source there's less than 100k that have used it in the last 6 months.

Well, ok. That tells a story of course. But there are no numbers on mastodons side like that for obvious reasons. So the pure metric of "how many accounts exist" is a better base for comparison, I think.

not for anything social it isn't

you gonna buy an mmo based on storefront sales numbers or the number of people still playing?

are you headed to a bar based on people you know that have been to a bar over the lifetime of it's business, or the people there now? Whatever, you wanted to compare. So do what you want. I don't care.

Mastodon is growing.
End of story.

same as the german wikipedia article.

Note that the number is massively inflated because it includes all gnu-social compatible nodes.

You cited it first. 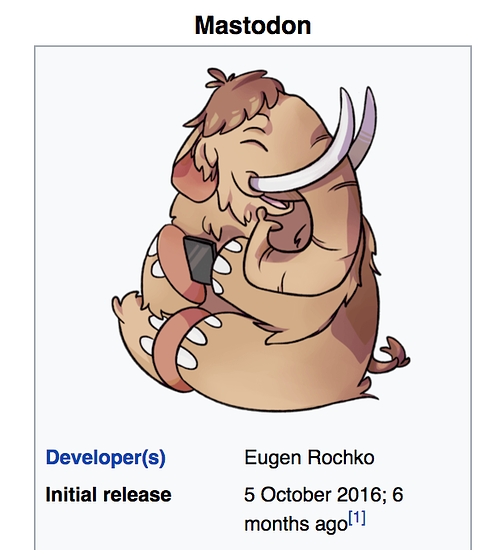 It's the same thing as diaspora. It's gonna follow the same trajectory.

But sure, I'm the one that can't read.

You must have special abilities to predict the future...

It's basic pattern recognition, not clairvoyance.

and yes, I picked up on the sardonic tone, but your bar is set way too low here 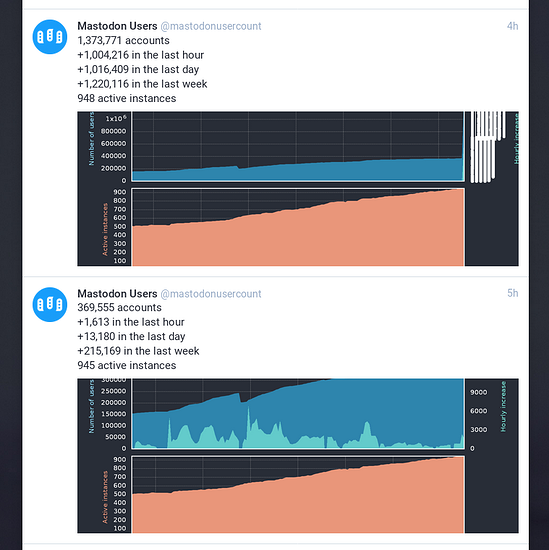 The amount of tech-savvy people on Mastodon is impressive. The best thing about it all is that people are really willing to have insightful discussions with each other. Probably largely thanks to the 500 char limit.

EDIT: This was something that wasn't always possible on Twitter. It often derived to just "screaming" at each other.

I looked at it and don't see the point. It just seems like another Twitter but this time they're able to offload a bunch of the hosting costs onto third parties. Of course you can run it on your own server independent of the main network but that's not realistic as it would make for a pretty lonely social network. Perhaps one day we'll have a truly de-centralized P2P solution for social networks but that is a pretty complex problem.

Probably largely thanks to the 500 char limit.

It's nice to have more room to continue a discussion, but I think in general it is not ideal for a Twitter-like service. The big benefit for me about Twitter is that I can read over my feed quickly and get a lot of concentrated information, since people have to write something like a summary/abstract of what they want to share. If I need more details there is always a link that takes me to a blog post etc. Alternatively, I have seen people write their big post in a text editor, take a screenshot and post that with their "summary" like that.

Conciseness matters. It forces you to bring out your best. Mastodon is Zoltan Twitter.

I would have to agree. I have noticed that on Mastodon these long "toots" can indeed make reading your feed "tiring". I guess taking a screenshot of a text file and tweeting it is a nice middle ground. None the less the evolution of Mastodon remains interesting.