So, being the owner of a shiny new M1 Pro Mac, I’ve basically not used my PC(s) pretty much at all due to the Mac screen just being incredible, the total silence 99% of the time, etc. It’s the first Mac I feel might just hit that “Desktop replacement” niche.

Given the happiness with the situation, I’m going to see if I can wean myself off of PC gaming, with a view to ditching intel/amd hardware entirely.

Which means… gaming on Mac. And primarily games optimised for Apple Silicon + Metal as a priority, but anything that runs well in macOS also.

Given Windows is not an option, my game sources are likely limited to the following:

possibly, since Wine 6.01 onward supports it (I believe?)

So given those are the likely restrictions, if you find something that works well I those conditions, post it up!

My first things I’ve been playing a bit on the Mac so far are:

So Ive been wondering if Proton works with almost of the games as well as in Linux or is it a different kind of hit and miss?

Proton is a linux thing, doesn’t have any bearing on Mac if I’m not mistaken.

I did try briefly to install WINE yesterday from home-brew and it wouldn’t run due to CPU problem. But I think development version might or there’s some other workaround to get it to run. I’m pretty sure WINE on M1-X is possible, but very new.

edit:
BG3 works OK if I don’t try and continue my PC game. I did get some sync errors prior to trying that so maybe related. new game works fine. Runs well.

I see you are a man of culture as well…

Oh the memories of that game… warms my heart and takes me to a truly special place. I was hard AF to run since i was in Win95 at the time.

Excuse the flash from my iPhone but… no fan noise doing this:

The machine is dead silent. No coil whine like my 6900XT

This sort of thing is REALLY showing up the pc laptop market… sound is from built in speakers.

Still BG3 a few minutes in, volume turned off - Still no fan noise; if you can hear anything its the (idle, fully SSD, liquid cooled) desktop PC next to it…

OpenEMU is basically a wrapper like Retroarch but nicer… I have PS1, NES and Saturn running on it at the moment, just need to install the relevant BIOSes

But yeah, there is PLENTY of gaming possible on Mac, just not so much “AAA” high end 3d stuff. Most of which is trash (gameplay wise) anyway if I’m honest.

Yeah… I can’t argue with you on that.

Just lost… several hours (in one go) in it, its cross platform iOS/iPadOS/macOS.

Simple controls, but it plays well, looks nice and sounds great (the audio is seriously, seriously good). If you’re into JRPGs of old, definitely give it a shot.

State of OpenGL and Vulkan on macOS

It appears that OpenGL, which documentation is quick to note has been deprecated since OSX/macOS 10.14, is still present on M1 macs, as a layer atop Metal, 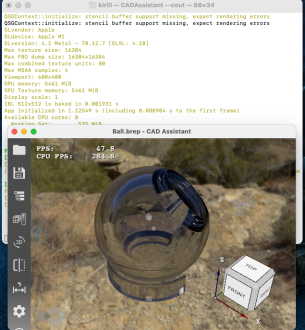 Apple has deprecated OpenGL since macOS SDK for Mojave 10.14, making me curious about OpenGL support since the very announcement of Mac mini based on Apple M1 (ARM) SoC. It was claimed in many plac…

I cannot find much information about this, but it appears to be separate from the commercial Metal→OpenGL layer, MoltenGL.

The company making MoltenGL also made a commercial Metal→Vulkan layer, MoltenVK, which was later made open source, partly through Valve’s involvement, 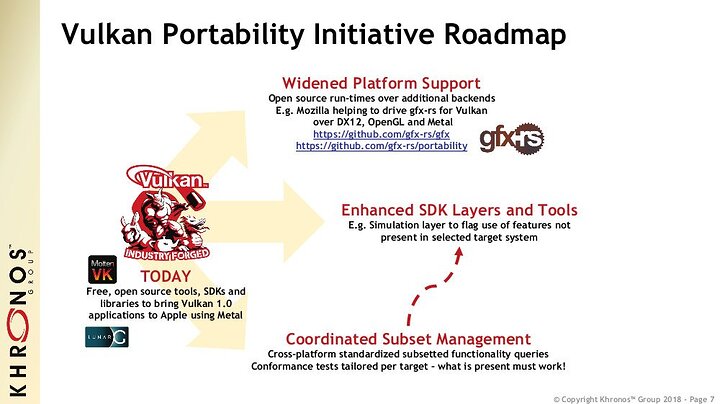 Vulkan Is Now Available On macOS/iOS By MoltenVK Being Open-Sourced, Vulkan...

Two years and a few days since the Vulkan 1.0 release is now marked by a new significant milestone for this cross-platform graphics/compute API...

MoltenVK is an implementation of Vulkan that runs on Apple's Metal graphics framework. Move to the next-generation Vulkan graphics API on iOS and OS X.

Yeah, openGL is still present, but has not had any improvement and does not track new versions of the standard for about a decade at this point…

(15 year Mac user here, but others who read this thread may not be aware)