The Xcomposite capture can only capture full 3D accelerated OpenGL programs, but fails to capture the Desktop on Cinnamon, nor a plain Terminal.

This was found cause I am trying to get a current clock graphic in and I figured I’d use htop’s output… NO DICE. Lua Scripting (and you’d expect it to be multiplatform) is currently Windows only… WTF?!?

Looks like this problem has been lingering and has been unsolved since it was discovered in 2016. I cannot use XSHM because I’m out of secondary monitors to capture from.

This seems to be an issue with the capture window functionality can you capture a rectangular selected zone? Or capture the whole screen and edit in post.

Unfortunatly there are and will be bugs in open source that can/will stay for a long time not fixed.

I can’t. I’m running Looking Glass at the same time and I’m out of secondary monitors to capture.

I just used a JQuery clock in Firefox to “band-aid” the problem of not being able to add a Lua scripted system clock.

Updated the bug notes with any relevant information.

If it’s a small use case and not a simple fix, it’s not uncommon that these can take a while to fix unless someone with the problem can fix it.

Capturing a terminal window alone is not a common use case? Tell that to sysadmins making tutorial videos.

I’m not familiar with the specific component your using or how your using it so I don’t know if it is or isn’t in that specific scenario reported.

If it is such a common thing for Sysadmins to do surely they have their own workarounds that work better than OBS.

Maybe look up what they have used and then use that. Why lock yourself down to OBS only?

Right, I guess this should be marked as a “WONTFIX” cause nobody can fix it. This is why OBS people that need multi-monitor and individual window capture still use Windows. There is going to be no effort towards solving this so might as well mark it “WONTFIX.”

Thats the spirit, give up now rather than make any attempt to get it fixed.

Seriously, either look into it and learn, try to help the devs, make it a relevant issue or… or… maybe just maybe, use something else and tie that into your obs capture.

It will but only with xorg. Wayland changes the way it fundamentally works and there is no fix. I spoke with the dev on github, and until the wayland team provides a capture API, there is no way for a program to capture another by design. Wayland devs were hostile towards him and refused PR’s he sent adding the functionality.

but fails to capture the Desktop on Cinnamon, nor a plain Terminal.

Unfortunately I can’t test on Cinnamon but if you decide to change OS/DE I am on OpenSuSE 42.3 with KDE Plasma DE. 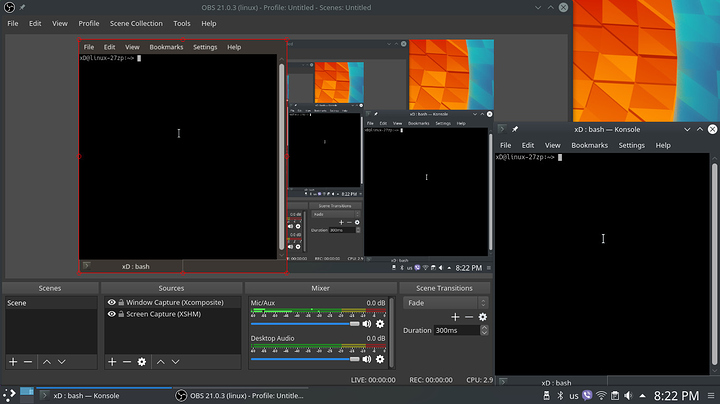 Right, I guess this should be marked as a “WONTFIX” cause nobody can fix it. This is why OBS people that need multi-monitor and individual window capture still use Windows. There is going to be no effort towards solving this so might as well mark it “WONTFIX.”

Or, just use a Windows box for recording and streaming. Win, win, win.

Also, see if you can help make the project better. Or, find an OBS alternative.

Did you even add to the bug report?

I wasn’t able to record the desktop or a terminal with OBS, and I just figured it was just a half baked port. But actually it worked when I switched to Wayland. I can record the desktop, a terminal, DOSBox, whatevs. It is a little touch and go if I want to capture from my web cam, my microscope, and show the desktop. Normally I just stream DOSBox based games, so I’m just streaming DOSBox itself rather than the desktop. I’ll give it a try with a windowed 3d environment and see how it goes.

Strike that, reverse it. It’s Wayland that has issues with recording the desktop. Though it’s not so much the desktop it has issues with, but rather capturing a specific monitor. I can capture the desktop just fine if I capture it using Window Capture, select Desktop, and check “Use alpha-less texture format”.

Yeah Cinnamon is still on X-org as far as i know.
So i guess simple screen recorder should kinda work.

Agreed. SSR is the best I’ve used for what it does.