I'm looking for some decent powered speakers that can be used in my office. These will primarily be plugged into my desktop, so I'm not looking for something super expensive. I'm currently looking at these speakers, but I'm not experienced in this area. Not married to these by any means, but something in this form factor would be nice.

Retro Look Modern Sound The R1280T has combined a retro look with a modern sense of audio quality. These speakers have a retro wood case look and grey speaker grills and are an ideal setup for any dev ...

My office is relatively small, about 10x12ft, so I'm really not looking for something super loud. More important to me is frequency response and quality of the sound.

TL;DR:
Budget US$100ish
Powered bookshelf speakers for use with a PC.

Micca PB42x are pretty good from all that I've seen 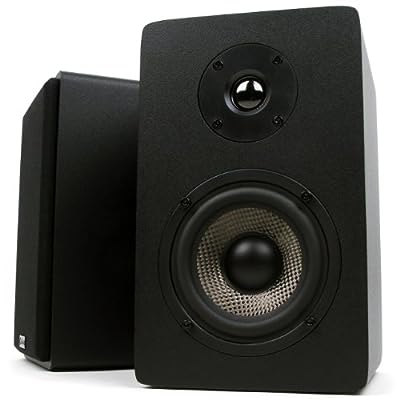 The PB42X is how we take an already great product and make it even better. It is the natural extension of the MB42X's success - everything we love about the MB42X is there, and now powered. The fronti ...

I've been using M-Audio speakers for a very long time. I used AV40 when I was in Korea but sold them when I left. After I saw that the AV-40 was discontinued I switched to the slightly smaller ones AV-32. Very happy with it. Plus I've seen this cheaper than Amazon at places like Guitar Center in the past 6 mo. so its very good bang for your buck IMO. 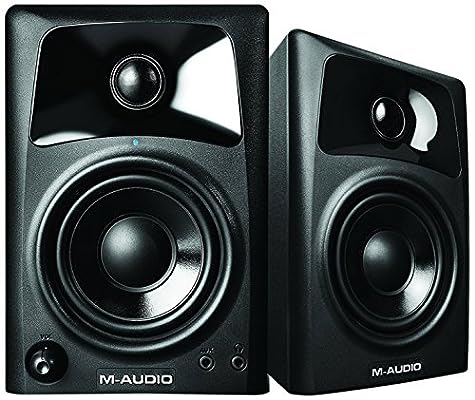 Recording engineers and producers in studios from all around the world rely on M-Audio monitors. Now, with the AV32 monitors, you can enjoy the same professional standard of audio quality right on you ...

Micca PB42x are pretty good from all that I've seen

I got a pair of the MB42X (non-powered) last month and they are really really nice.

I was listening to music to test them that had a good mix, not necessarily my favorite songs. Just for fun I tried listening to Micheal Jackson's "Wanna be startin' somethin", because I know he was a mixing genius. I didn't hear the music, I heard 24 separate tracks. Then I started hearing quiet voices in the background that I had never heard before, after 35 years of listening to it.

I'm knee deep in reviews across them all right now. I'll update when I make a decision though. So far my thoughts are this:

PB42X sound like they're a bit limited because of the low wattage.

R1280T seem well rounded, and match the wood grain on my desk, but that's not super important since the others are black.

the AV32 are decent, but again, 10w limitation is pretty low and I'm not sure how that's going to work out.

Yeah, the wattage is the biggest limitation on the PB42X, but a thought on the two that have wattage limitations is, your office isn't too large so it might not matter all much.

That's probably true. I think the question is how much sound do you get from 10-15w. That's the thing that these reviews make it hard to determine.

To clarify, I've got 1750w of sound in my sedan and that's barely loud enough across a 6 speaker system.

From my understanding, it's enough for easy listening sessions, nothing that will be loud enough to cause pain, or listening fatigue. If you end up getting one of the lower wattage ones, make sure you can return them if they don't fit what you like.

What wattage are you aiming for?

I am using a Logitech G51 system with 25W per channel, which is good but much less than 15W. Maybe getting the standard MB42X with a small amp is an option? In a car one needs a lot more wattage than at home to overcome road noise.

I've been running KRK's, they do the job with a flat sound curve at a decent price.

I am using a Logitech G51 system with 25W per channel, which is good but much less than 15W. Maybe getting the standard MB42X with a small amp is an option?

What wattage are you aiming for?

Not sure. Around 50 is probably good.

In a car one needs a lot more wattage than at home to overcome road noise.

That's true, for the most part. I've gotta say though, the new Mercedes E350 is damn silent. You're able to talk at just above a whisper and have people hear you. It's insane. I wish I had 60k to spend on a car but I'm poor.

That one is 3.5x my budget. Looks awesome, but can't afford it. I'm thinking the R1280T is my best bet. Looking at some specs, the frequency response is good and with 45w power, it's probably perfect.

Eh, I like quality over loudness. The reason for the loudness is because my car is not what you'd call quiet.

Remember, monitors are designed with engineering in mind. They will reveal all the imperfections in a recording, because you'd want to identify and fix those in a studio environment. Loudspeakers are meant to reproduce the recording for sheer enjoyment. However, you said your budget is around $100, so your options are extremely limited. If you listen to a lot of compressed music, I would definitely suggest loudspeakers. Some people might have a separate set of speakers for enjoyment and another for critical listening/hi-fidelity/hi-definition sources.

PB42X sound like they're a bit limited because of the low wattage.

the AV32 are decent, but again, 10w limitation is pretty low and I'm not sure how that's going to work out.

10W could be feasible, depending on your environment and listening preferences. You don't need a crazy amount of watts unless you're going to blast speakers. You plan on hosting any parties in the office?

I don't know if this is any good, but it meets your 50W requirement. The reviews say the bluetooth is crap but you should use USB or haedphone input.

This site is good, but this amp has mixed reviews. Sounds good as long as you never turn it past 50% and the FM radio is crap.

I would suggest trying to find an old receiver. You just aren't going to find a good quality amp at this price point.

I wouldn't use bluetooth anyways. Thanks!

I've found a local audio shop so I'm going to head down there and see if they have some speakers in my range so I can have a listen. I'll report back in a bit.

I went down to the shop and looked at a variety of speakers. Some in range and some out of range. I wound up settling on the Edifier's since they sounded great, had a $10 discount in store, bringing them to $89.99 pre tax, and they match my desk perfectly. 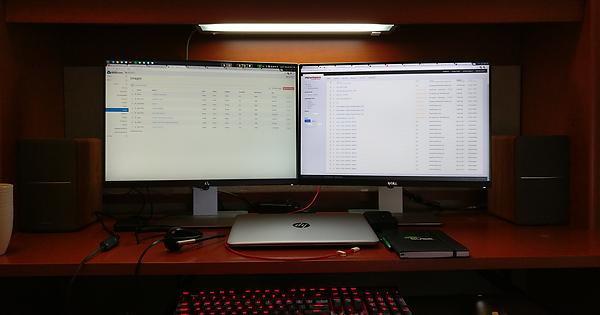 As you can probably tell, I'm absolutely psyched about the color match.

Thanks to everyone for the suggestions.

So, since you got the Edifiers now and seem to be happy with them, a quick question...

I see they have a remote control for switching inputs. Is there any way to control that without the remote? I'm thinking about getting those too (currently looking at those), but I'll probably loose that remote rather quickly...

Currently leaning more towards the Edifiers (they were not available when I found the Behringers) for the Bluetooth and also the price, aside from the the connections seem to be the same. 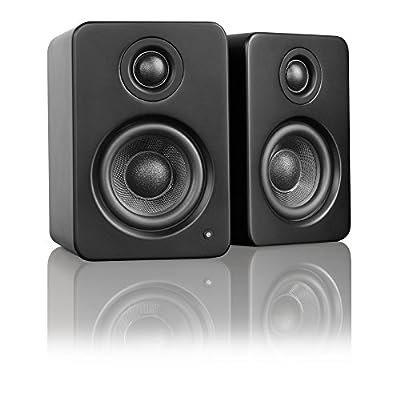 Enjoy listening to your favorite tunes with the Kanto YU2 Powered Desktop Speakers. These premium computer speakers provide distortion-free mid-range and bass tones thanks to their 3" composite driver ...

I just got these, and I find them acceptable. They're nice and loud. I would go into quality but I'm on Linux and mostly playing videos off of Youtube so... not sure how good or bad they are.

The presets on Pulse Audio are just terrible. Bass is too high on every preset. They can get quite loud with no distortion, I'll say that. Considering their small size, they are pretty damned good.

Those look great in your setup, nice choice.

One suggestion though, tilt them so they face your ears rather than facing straight out. You will find the sound quality improves when they are in line with your ears..

Looks nice! Glad you were able to find some locally too.