Looking for a case similar to Antec p101 Silent

Hello everyone, I’ve been searching for a case like the p101, and I’ll detail why I want that case below.

This case is for my “server” which will run TrueNAS with at least 3 HDDs. It’s also running around the clock in my bedroom, hence the need for silence.

Sadly, all the cases I find have 2 3.5-inch drive bays at the bottom of the case, unlike the p101 which has 7 3.5-inch bays in case I want to add more storage in the future.

So why am I not going with the p101? Well, it has only 1 exhaust in the back and none at the top. This computer will also be running virtual machines and handbrake transcoding, which will get it quite hot, and I’m afraid the airflow in the p101 will not be enough.

So if any of you know of a case that’s close enough to fit my needs, I would be glad if you posted a link to it or a name for me to start the search.

Have a great day!

EDIT: I forgot to mention what case I have now, I have an old NANOXIA case that looks like Deep Silence 5 Full Tower Case — Nanoxia USA but isn’t it.
I also found the Fractal R5 which looks almost exactly like the one I have now, which made me question myself, and doubt there’s a better case out there for my use case.

How good are you with power tools? It’s not difficult to add a few ventilation holes in the top of the Antec case, add a few Noctua fans (large & low profile, I’m assuming) and a fan guard on top. Just make sure you have the correct drill bits (for metal, not wood or concrete!) and other tools for making the various holes.

You can always go the Fractal Design route…
Define R4/R5/R6 or the new overpriced R7…
The way I see that Antec have almost no intake airflow.
There is this old old case NZXT H440 (that Fractal R7 totally ripped off), but that is way too old, and even that have better intake than the Antec…

I just pulled mine for dusting. I find Fractal Define 7 to be top-notch if you don’t need hot-swap drives. Filtered and mesh top (solid with dampening foam is in the box too) and bottom, relatively silent if fans are on low RPM.
Mine is not 100% cable managed, but there is lots of space for drives.
That is Mellanox 10G card and Dell PERC H310. I should probably strap on a fan on that HBA, but it’s not as hot as when operating in RAID mode. 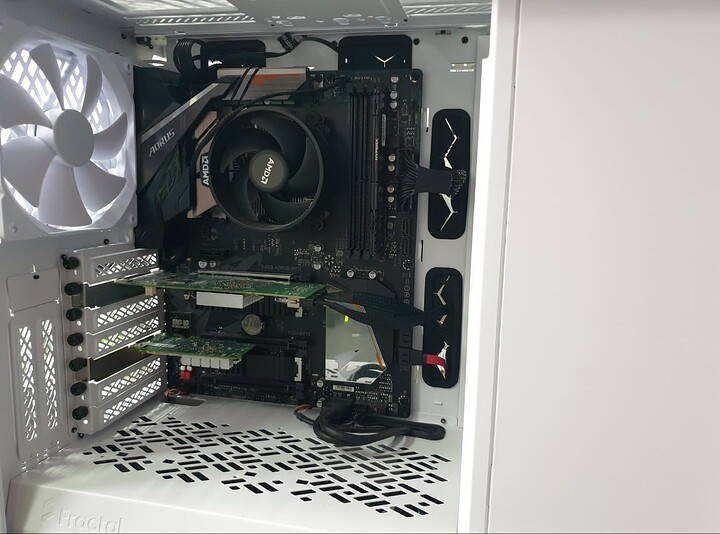 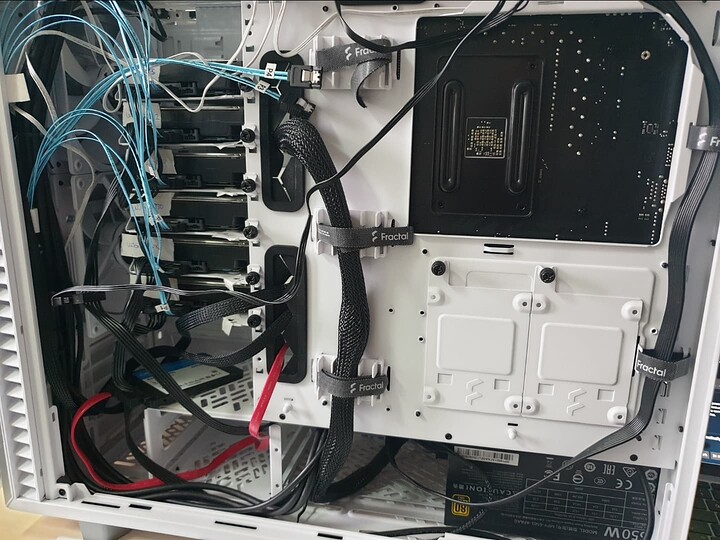 How good are you with power tools? It’s not difficult to add a few ventilation holes in the top of the Antec case, add a few Noctua fans (large & low profile, I’m assuming) and a fan guard on top. Just make sure you have the correct drill bits (for metal, not wood or concrete!) and other tools for making the various holes.

I’m quite handy with power tools, and there was also a product featured by Jay on Jayz2cents for making vents in cases where there are none. I’m just not sure whether that’s worth it compared to what I have now.

You can always go the Fractal Design route…

I did mention that I found the r5 in an edit to the main post, but it looks exactly like what I have now, whereas the drive cage on the Antec one was a bit more modular I guess.

Sadly, that’s a bit over the normal price range I was willing to pay here, it might be cheaper in other regions. I am also waiting for the Torrent to reach resellers in my area, so I can replace the case of my gaming PC.

Thanks for all your replies!

Fractals Define 7, would be the closest in presentation to this P101
Other options being some of the beQuiets, likes of Darkbase 700 / Purebase 600
Or Phanteks P600s
… Do anticipate purchasing of additional sleds

Other with little/0 acoustic dampening, off top of head, would be CMs N400

I did mention that I found the r5 in an edit to the main post, but it looks exactly like what I have now, whereas the drive cage on the Antec one was a bit more modular I guess

Looking at the Nanoxia it’s quite a decent case. I honestly see no reason to replace it. Is there a problem with your current case, that you want to replace it?
Also, the Antec is a step back if anything. Have you seen the front vents? They are toiny.
I say R5 is better than the Antec if nothing else for the better airflow.
I would have recommended going with an airflow case, but you are talking server here and those hard drives need their noise dampening…

I will check if these are available near me, thanks for the suggestion.

Is there a problem with your current case, that you want to replace it?

Well, the front door is broken, so the fans are exposed all the time. I used to have it partly open, as to not impede airflow, but now that’s not possible.

I was hoping for more from intakes maybe, but I do have a DVD drive on it, so I guess you’re right. There’s no actual point in upgrading the case, but I might look into upgrading the fans to quieter ones, and possibly an AIO down the line when I replace the motherboard and CPU.

I guess I liked the floating storage sleds the Antec had, both for vibrations and airflow, but it’s a small difference for a huge price.

Just to update, I stuck with my current case and got a liquid freezer 2 280 at the top. Plus, I replaced all the fans to Arctic Bionix fans.

If anyone is interested, I can post pictures when I get the fan guards. While in theory this case holds a 280 rad, in practice there’s a bump near the I/O shield that prevents a rad from lining up with the correct holes.

So what I ended up doing was route the rad fans to the outside top of the case. (under the shroud but cut most of it out, if you look at pictures of the case you’ll see what I mean.) And drilled new holes in the top, so I could fit the screws through the fans to the radiator below.

It works, as I mentioned, I am waiting on 140 mm fan guards to arrive, but over all I made it work.

If you’re wondering why after drilling new holes did I not put the fans inside? Because they hit the ram sticks even at the edge of the ventilation holes that came with the case.

And I also found this: 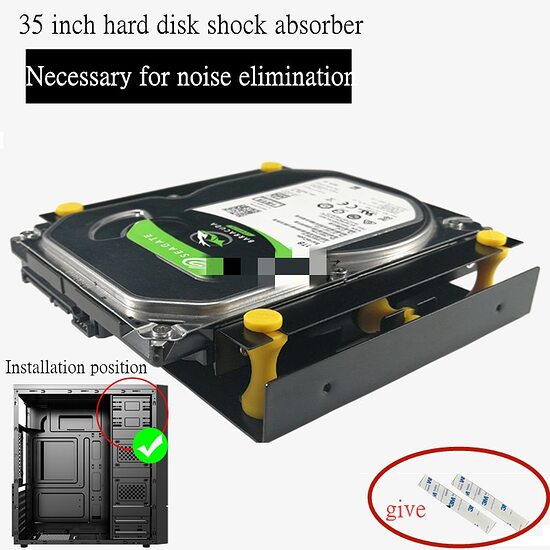 In case I need more HDD space, and want to use the slot above the DVD drive (which I might also remove and either use an old computer when I need a DVD or get a USB one.) 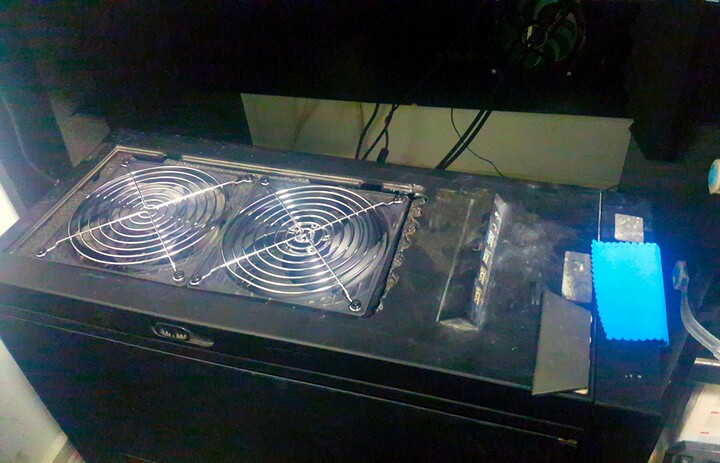 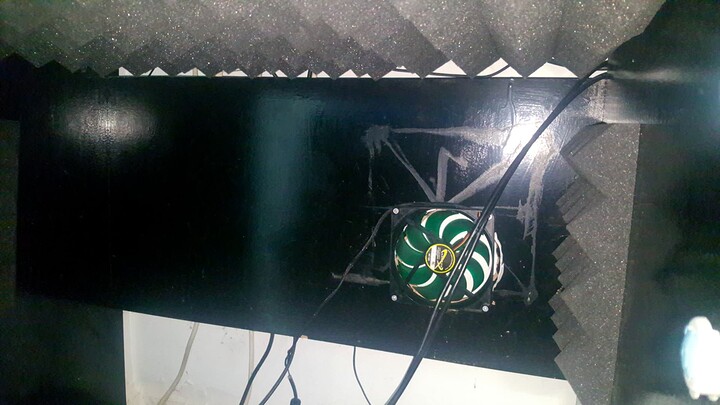 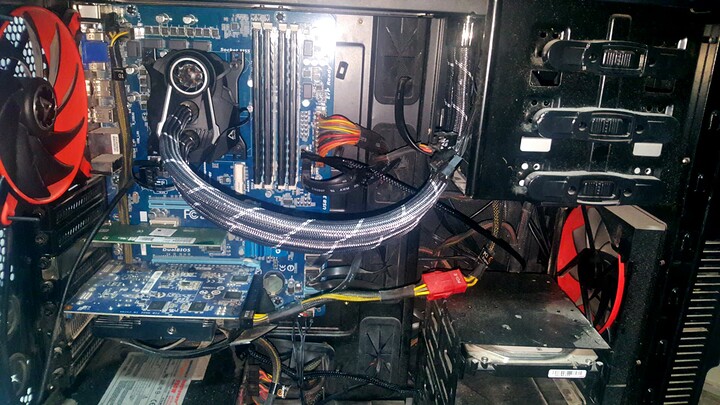 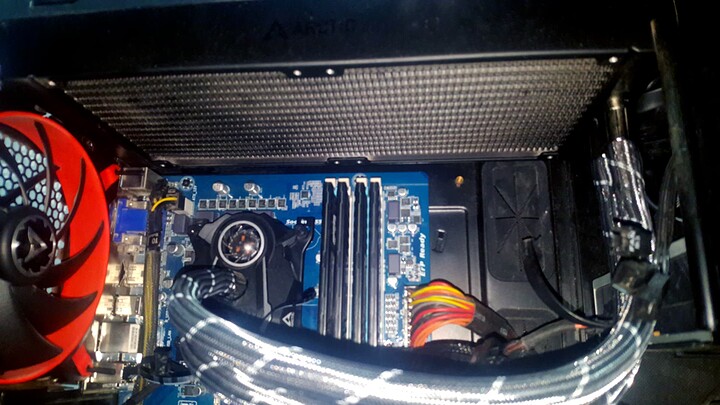 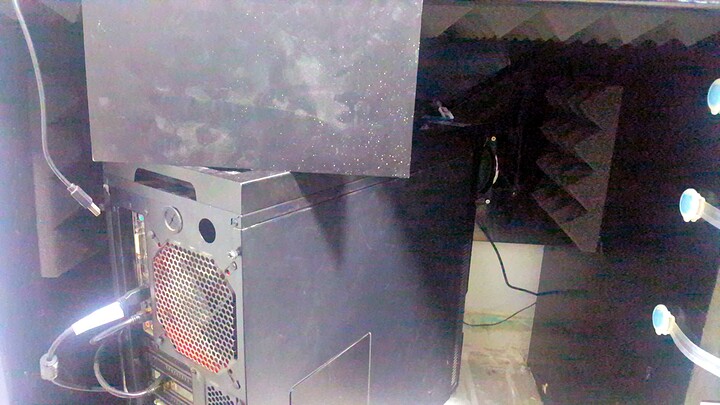 Here are the pictures as promised, the top front fan is still waiting on the filter that’s supposed to arrive next week.
Other than that, the motherboard CPU and RAM will be replaced hopefully in the near future to a Ryzen 5800x, allowing me to install TrueNAS on this and have a RAID on my current hard drives.

If anyone has any questions, I’ll gladly answer.