with linux many of the flavors are capable of downloading a plethora of educational software.
one of my favorites is debian edu. it installs very easily and is fast even on old systems.
debian maintains excellent repositories so there is a lot of options available.
during installation you have the usual choices of workstation, server, thin-client, and stand alone system.

for children from 2 to 12 picar os “diego” you have to choose the default language you want but its install program is called system transfer.
it also is a powerful tool and customizable for single or multiple students with teacher/ parent control features.

there was a secondary/ college level distro called Uberstudent that was phenominal but sadly has been discontinued! this one i wish was still active for it offered many adult level classes.
This to me is a real shame!
there are more out there but seem to be short lived.

think of it would you like someone doing surgery on you based on you tube university?

this is something i think we should pursue avidly! (developing educational software)

So are you looking for education tools?

I volunteer tutor adults (some for one reason or another were not properly educated. (math skills, proper spelling, and grammar, and communication skills))
its bad enough they feel embarrassment due to lack of knowledge but to be seen and recorded purchasing adult learning materials to them is traumatic.

i posted a few tools that i use (being a linux user) that my younger student have had very good luck with.

Im not sure if there has been education sites posted on L1 (probably has) but i think its something that should be stickied.

Hi! In my region in Spain the School Department of the Autonomous Regional Government has its own distro based on Ubuntu and it’s used in thousands of school computers alongside with Windows across the region: 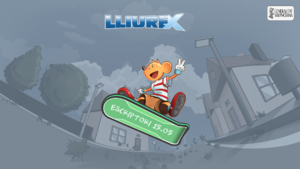 LliureX (Valencian pronunciation: [ˈʎiwɾeks]) is a project of the Generalitat Valenciana whose objective is the introduction of the new technologies of information and communication based on free software in the education system in the Valencian Community. It is a Linux distribution that is used on over 110,000 PCs in schools in the Valencia region.

I personally had to use back when I was in Middle School/High School and its just fine. It just works, although, a lot of people are initially confused about it because they are not familiar with Linux Distros and whatnot. But, suffice to say, all students in my region on Spain have had a more than basic introduction to Linux by the time they’ve graduated from High School (120,000 people annually :D)

Dunno know what to tell you per se, tbh. I think you’d be fine with regular Ubuntu or Linux Mint.