The Linux GOTY award is now over, here are the results!

It was a massive year for Linux gaming, so here's a look at who won and a big congratulations to all who did!


What do you guys think?

There's a lot of love for life is strange, I think its well deserved.

Bullshit on the xcom dlc. Long War was supposed to come out in december ugh I wish it did that would have won!!!!

Fact: Skullgirls was the Linux GOTY.

Fact: It totally was though

Isn't longwar more of a mod than dlc?
You did have the chance to vote :p

Beastmen DLC in the list...totally not worth it..The DLC situation with TW: WARHAMMET is sickening...

Everyone I ever got to know has mostly positive words about Life is Strange's set up and story, but there was one other perspective I found, if you are interested here;

Our stories, our games

Last week I was lucky enough to make a last minute trip to San Francisco, just in time for the annual game developers conference (GDC), to present Beyond Eyes to the international press for the very first time. As usual the wonderful weather +...

I do love the game, and learned many things from the way the story was told; about story telling in games. :D 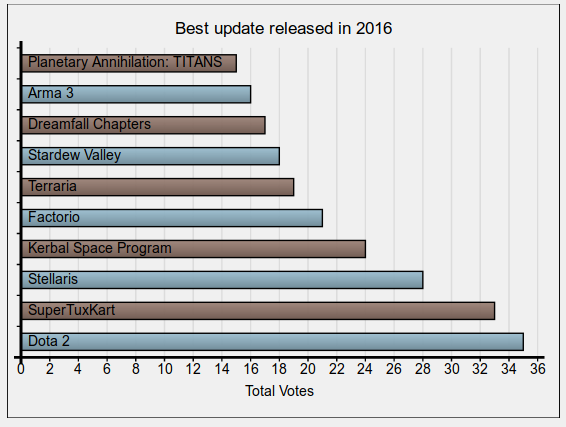 I just double-checked, and steam offers windows-only. WTH is Arma 3 doing in that list!? is there a port of A3 I wasn't aware of?

Also I don't agree with having "Life Is Strange - Episode 1" as part of the list of free games. It's a single episode, I'd count it more as a demo than a free game.

Yes. There's a port of arms 3. Recent updates have been good but it still lags behind a bit.

Keep in mind this was all user voted.

Yeah, but there's no better way to keep your development team paid... I haven't played that game yet but I heard it was good and of course I've seen some spoilers online, mostly in passing. At a certain point, the fandom was so huge even google was going bonkers, showing "rule 34" results in safe searches. I'm not a "think of the children" kind of guy, but I have to say that was ridiculous...

The game was obviously designed to tick as most attraction boxes as possible for certain young western audiences. Every choice they made was with that in mind. The storyline, the choice of language and location, the making of the protagonists and their traits, even the tool used - a polaroid, the "Instagrammy" hipster weapon of choice (not bashing on actual photographers, I had one myself). Looking online, one can see that the game is a huge success (financially and in number of players). And many say it's because of the great storyline, pacing, game mechanics and such... Now imagine the same storyline and mechanics applied to a couple of old, ugly and fat african american sysadmins living in New Mexico and using a Oneplus phone instead of the polaroid to take pictures... I can easily see 95% of the games current audience not even existing in that case. Storyline may be good, but it's the whole package that counts.

My point is - that blogpost is ridiculous... and from a business standpoint, they made the perfect product. Seems like everyone is looking to milk USA for its money.