I’ve been meaning to do a blog on Linux only gaming for a few months now. Mostly stuff from the repo’s with some other randomness like Itch.io, Steam, and whatever else I run across. I’ll probably dive into a bunch of terrible games in search of a few rare gems.

Thanks to LinuxGameCast for kicking me in the balls.

This first post is going to revolve around my hardware and 7 Days to Die as per request. I’ve been horrifically ill (no 'rona) for nearly two weeks and can’t eat solid food, so this may very well go off the rails into incoherence.

I also want to admit that Pedro is right about the optimization in this game. I could play this game in Alpha 16 on a G1850 Celeron with an AMD 4870 and 8 GB of RAM, and all of those pieces of hardware became insufficient for Alpha 17. Experimental builds didn’t work for me before, but they enabled it for Alpha 19 experimental. There is a hit to performance, but I’ll save final judgement until they release the stable build with no further point releases.

I also don’t run ‘perfectly’ medium settings. I usually turn off some of the lighting stuff because it is irritating to me, as well as low grass distance. Turning shadows off can also boost FPS, and there is a command you can use in game ‘gfx pp enable 0’ which can also bump up FPS, but I haven’t used that in a while. I run the Oibaf PPA in a Frankenstein Lubuntu 19.04 upgraded to 19.10 and then 20.04. Different compositors may affect game play.

Let’s take a good look at the hardware, as not all 2400G systems are created equal:

The only other piece of hardware of note is my old Socket 775 Tuniq Tower. I had to use a threaded rod with nuts and washers to spread out the heatpipes, which squatted the top down ~3/8" to fit in my case. The old bracket was a flat steel plate which I replaced with one I made to fit AM4 and got 4 new screws. I lapped the base for good measure and used my trusty tube of Ceramique 2. I don’t know if there would be any thermal throttling on the stock heatsink, but you can run it at 3 cores 6 threads and not notice much in games since the iGPU is the bottleneck. It knocks off nearly 25 watts (20%) of power consumption while gaming.

RAM speed is everything for iGPU’s. Single channel, low speed, or bad latency settings will thoroughly destroy performance. I personally wouldn’t pay the Samsung B-Die tax, but if you want a ~10% performance bump for that much more cash I would consider a dedicated GPU and cheap RAM. Also make sure your RAM is in the correct slots as per your MB manual. I personally wouldn’t use anything but a B450 board for a 2400G.

Now that those details and qualifiers are out of the way, let’s dig into 7 Days to Die. Out of curiosity I tried to download the experimental build which worked, and while playing I listened to Linux Game Cast and realized I was going to have to go back to A18.4. Might as well test A19 since it’s there. Another quick note - since I’m not at home I’m running on a TV that is 720p. Why does 720p ALWAYS look like garbage in Linux, but 1366x768 is sharp and vibrant? I can never make 720p look acceptable.

This was the lowest FPS I could screenshot; A19 doesn’t fail to de-optimize: 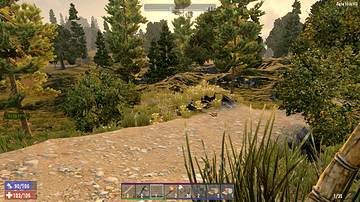 7d2d41280×720 1.69 MB
It took a half hour of running around to get the screenshot. Most of the time it was hovering between 48-53 FPS when moving around in environments with lots of stuff to render. Indoors was usually varying between ~60-80 FPS. 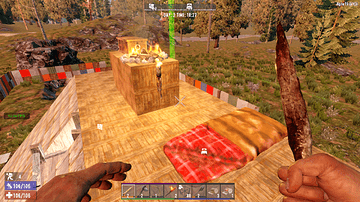 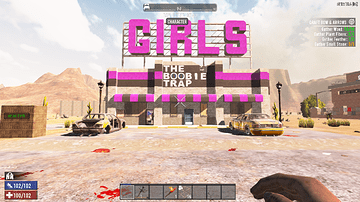 7d2d81280×720 1.12 MB
I actually intended to start out with the best case scenario and work my way to the worst, but shadows on or off and post processing on (turn back on with gfx pp enable 1) or off didn’t seem to make a difference. Taking the screenshots caused more of a dip in performance. I do remember those helping online in the past, so it can be worth messing with. 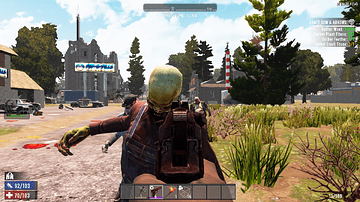 7d2d91280×720 1.3 MB
And there’s an action shot. I messed around for a while and saw a couple dips into ~47 FPS. I’m sure I could spawn in 50 zombies and tons of campfires going to get it into the 30’s but that’s usually stuff from playing in god mod or online in a massive group which is pretty atypical for me. I’m confident I could get the RAM and iGPU optimized a bit better for a few more FPS, but I’m happy with my ~$400 PC.

The main thing that boggles my mind is the FPS tanking others experience. Regular stutters with the FPS meter going yellow and red on them. I’m sure it’s particularly bad for streamers running everything under the sun on one machine, but I just never see consistent stuttering outside of heavily populated servers with garbage built everywhere. The lack of optimization may actually work in my favor as it could be equally bad for all machines, but not so terrible at lower resolutions.

Neither Pedro nor I are 100% correct, but for calling shenanigans, I give you this: 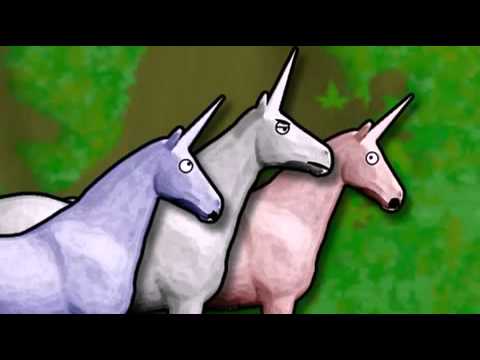 No hard feelings, Pedro. You even said my name right! I appreciate the time and effort put in at LGC, as well as giving me something to do while stuck in bed.
1 Like
wertigon July 18, 2020, 11:47am #2

Nice initiative, a couple of improvements:

If you really want to measure frame rate, try MangoHUD.

Also, if you want to toy around with fan curves and under/overvolting, try CoreCtrl.