I'm in. I have not done this in years. We'll see how my 780 does. As was mentioned above, at least it will heat the room nicely!

It doesn't matter you just have to have the Passkey so you can get extra points for finishing earlier. I am now on estimated 250k ppd.

Awesome that we got one of these running.
Time to start the winter space heater!

So we now have 50 contributors which is absolutely awesome! Thanks everyone for taking it so seriously! Of 225k teams, we're now in the top 3,000!

Just joined... My first time folding. My office doesn't have heat and it only gets warm when playing games. Now when i sit i can be warm with folding. Im in Sweden BTW.

sounds cool, when i get back from my trip ill put one of my servers on it. sounds like a good team thing to do

Joined my server. Thinking about adding the workstation too since it has a graphics card.

Firstly Hello.
Secondly anyone else having trouble adding a 1070 to FaH? The drivers just seem to always crash and the error in the log I kept getting was bad work unit. I was on a stable clock but decided to back it off and that didn't help. Rolled back drivers and that didn't help. Uninstalled and reinstalled FaH and still crashing.

No issues with my own MSI 1070 (Gaming X 8GB). I did have low scores, but that was due to an error on my part apparently.

Uninstall the drivers completely (with a driver remover tool, no idea what the best one is currently), then re-install.
I can verify that the 372.70 and 373.06 drivers currently are about as good as it gets when it comes to folding.

Don't overclock to GPU, especially if it has Micron memory. You can use GPU-Z to find out if your 1070 has Samsung or Micron Memory. The latter is known to have issues, sometimes even on stock speeds. For most cards there is a BIOS update now though, which increases the memory voltage and solves the instability problems.
But I think yours is simply a driver issue.

I was getting errors with my 780 when I first installed the app. A clean install of the newest Nvidia drivers seems to have fixed the problem for me.

I stopped updating my 780 a while ago. I haven't had any errors so I'm not trying it. I did once and I had to wait a month to play the game I wanted. I won't update that gpu again until I have to

Well after 2 hours of dicking around, uninstalling and reinstalling I finally decided to go back to an earlier clone I made today and it just worked. So with that done my 1070 is pushing 630k ppd and I don't really know if I'm reading that right.

No word on SPARC doing this yet?

630K? That's a little on the low end, but after all your trouble I would advise against messing with it too much. I'm reading numbers of around 700K, and mine is pushing just that right now. 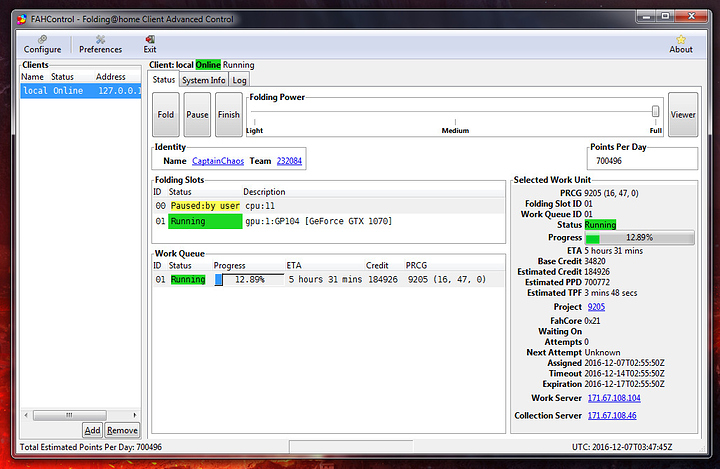 Is it possible because I am running both cpu and gpu? 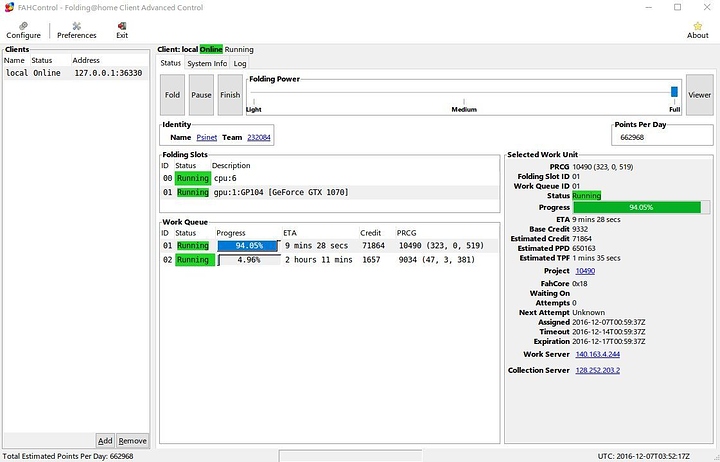