I'm surprised to see Barnucleus' team so high up in the ranks (#19).

For those of you leading the way for the L1T team, what kinda rigs do you run for [email protected]? Do you have dedicated rigs you let run for this, or just do it when your computer is idle?

As I understand it, FAH uses one CPU thread per GPU. So, if you are running dual GPUs on a dual core, you may not get any WUs for the CPU. This thread discusses the topic. https://foldingforum.org/viewtopic.php?f=38&t=28540 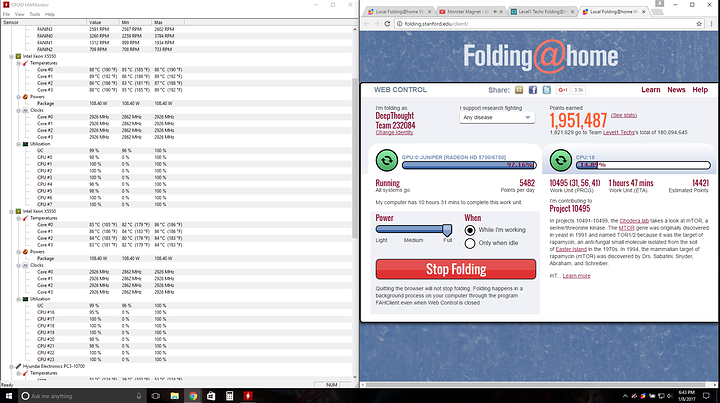 For those of you leading the way for the L1T team, what kinda rigs do you run for [email protected]?

Main PC :
i7-5930K @ 4.5, cooled by BeQuiet Dark Rock Pro 3
MSI X99A Gaming 7
MSI GTX 1070 Gaming X 8GB
BeQuiet Dark Power Pro P9 850W
I plan to add another graphics card (probably my spare GTX550Ti), but that'll be for passthrough rather than folding.
PC is folding on the GPU 24/7, but I do manually set it "on idle" when I want to game. CPU isn't folding because that did affect responsiveness.

I must add that I only started folding when it got so cold that I had to turn on the heater, so right now I'm using the PCs to heat the living room. No idea yet what I'll do in the spring or summer, but I'll most likely turn off [email protected] for a couple of months when the room temp gets too high.

I'm trying to make a similar (albeit smaller) project to [email protected] if I could get someone to take a look.

Genetic Research -- Who's got some spare cores? Science & Engineering

Hello all! I've got a project likely coming up where I need to parse through more than 36TB worth of data. In particular, I will be needing to perform a cluster analysis for transcription factor prediction based on gene microarrays in the Gene Expression Omnibus. The analysis will be using a new version of TF-Cluster, with a yet to be written wrapper. Source here: https://github.com/anadon/TF-cluster Paper here: https://www.ncbi.nlm.nih.gov/pmc/articles/PMC3101171/ What I could use help with that is easy is to comment below, so I can follow up when the program is all done and I just need cycles or to give feedback on documentation.. What I could use that is hard is tracking down a bizarre memory leak of 101 vertexes in the graph, creating a set of scripts to deploy and collect jobs, and adding support for the file formats used by the GEO. I'm also open to suggestions on how to better do things in general, too. Right now, if you want to play around with TF-Cluster, it requires git, libc, and make. Documentation should be mostly up to date, but there's certainly places where it is lacking -- I'm working on it. If anything is unclear, I should be able to explain everything related to the project.

Ayyyyyy, finally got up and running with [email protected]
Slapped my 280xs in my x79 w/ 3930k
I don't think the second 280x is doing anything never messed with 2 gpus before. I'll fiddle with it in a few hours.

Got my second 280x folding away, up to 6 work units. I accidentally installed the dead 280x...

Soon I'll rebuild it all in another case with a proper cooler on the cpu.

Has anyone used the FAH control application (unofficial)?
I don't particularly trust it running 24/7 unattended.

Been folding for the team. System is an i7-4770K (no OC) with GTX-750 Ti (Asus) running Kubuntu 16.04 OS. All the folding with this system has been on the CPU. I would like to use the GPU & tried following the Cuda Install Guide for Linux , but have had no luck and feel like I'm deep in a rabbit hole. Can anyone with Linux-fu help?

I have no experience with linux but maybe someone will come along with knowledge.

What's your estimated PPD with that setup?

its fun but the time to run it is limited, shit house wiring will trip a breaker since half of the upstairs is on 1 15amp circuit

Hi All, if you want to track the progress of the team day to day, i (started to) built a small little site a couple of weeks ago to do some data harvest/processing.

Searching for "fail" or "error" in the log netted me with only 1 error:

I want to say it's not relevant given that's the only error, and I've had 2 large folds not net me any points even though I'm going uninterrupted on them with a GTX770.

maybe server maintenance? I've been folding all night and no update
I'll check back in a few hours

maybe server maintenance? I've been folding all night and no update
I'll check back in a few hours

Good point. I notice bourbon warrior is still sitting at (what I believe) is the same score he had yesterday. Judging by his score... I'd imagine he folds 24/7.

Nice! I wish my GPU was on water when folding... I'd imagine it'd be so much quieter.

I keep looking for a reason to build a rig in my old Node 605, and have considered a dual GPU folding rig. I wouldn't be able to water cool 'em in that chassis... which kinda makes me NOT want to build a folding rig in it. I just like that it's a horizontal case so it's on a shelf I have, and I already own it. Too bad GPU's running full tilt are loud.