This is a companion discussion topic for the original entry at https://level1techs.com/video/level1-news-march-6-2018-cesorship-i-chia
Streetguru March 6, 2018, 5:54am #2

It may be a bit late, but it might be a good idea to start numbering the news shows. Like how the PCper podcast is nearing #500


numbers are in the playlist shown above. Unfortunately for @wendell me linking this means I may have found a flaw to your current upload routine.

You need to make the videos unlisted and add it to the playlist after the “hot period” is over if you want a playlist/archive of full videos - one full video for each news day.
(That’s assuming you didn’t do this already)
The reason this should be done is otherwise I don’t need to know the URL to access the patreon content, I just need to go to the playlist.

I don’t know if numbering things helps with the search algorithm, but I don’t see any way it could hurt it.

I get the feeling that Shatner hires a phantom writer to tweet for him.

The long eps are not added to the playlist til Friday at which time all episodes were out anyway (?)

@kreestuh I prefer the previous style of the thumbnails. I think they look better and they grab your attention lot quicker than the new style.

The new design is too minimalistic. When several videos are stacked in a pillar (Youtube) you can barely tell which ones are your and which ones belong to different channels without reading the text obviously.

The double large triangles that create a background for the title of the video is much easier to see than the small triangle in bottom right corner. 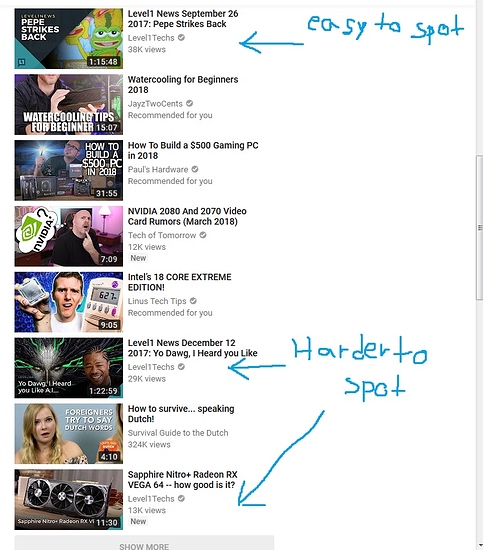 I listen to you because you are very informative and an all around nice guy. You try to see the positive in the tech industry. Thanks for all you do and keep up the good work.

I like this new format better than last weeks… flows better and you don’t have this abrupt stop. But you have to stop saying Cox, there is no way YT can tell the difference between Cox Communication and Cocks Communication.

This is very true

now the question is will the count on the fasteners grow again or will it stay static until the code is broken. + the tide pods are back much to my dismay.

The unidentified aircraft could very well have been a spy plane from another country. Lockheed Martin has just proposed a hyperjet successor to the famous SR 71 Blackbird spy plane, which held the record for the fastest production plane. For decades now geologists around the world have been recording the unmistakable sonic boom of scram jets and hyperjets in different countries, but they are only flown at night to prevent anyone from taking pictures of the technology. These can move at up to Mach 10 or faster, with Mach 25 being escape velocity if you want to go to Mars.

Assuming it was a spy plane, the question becomes, “What was it photographing?”

Not sure if I’m digging the new format but I’m rolling with it, and see why they are doing it.

In regards to the content, Ryan @ 21:54 mentions that YouTube/Google is a private company and can do what it wants. I think I’ve found a good rebuttal and a big news story to boot:

Tell Me More About How Google Isn’t Part Of The Government And Can Therefore...

When you tell an establishment Democrat that Google’s hiding and removal of content is a dangerous form of censorship, they often magically transform into Ayn Rand right before your eyes. …

And for those who just want the link in the posted article:

Google Is Helping the Pentagon Build AI for Drones

Google has partnered with the United States Department of Defense to help the agency develop artificial intelligence for analyzing drone footage, a move that set off a firestorm among employees of the technology giant when they learned of Google’s...

At this point, Google being a private company seems like it’s a technicality. All while censoring dissenting opinions against the establishment.

Google is a private company, Americans have contracted out their government to the highest bidder.

hate deep state surveillance it has a harsh cooling effect on what i want to say and how it could be taken many wrong ways. and there is not a kind way to say what needs to be said. corporate world leaders we see you and know what you are up to and refuse to bow down. play nice or body bags await from military that is still loyal to the people. or something along those lines.

Its empire baby, and this train ain’t stopping until she derails. Academics teach people how to destroy the planet, then complain when most of them refuse to believe in the theory of evolution, despite one in five of their students insisting the sun revolves around the earth. The lights are on, but nobody is home, when money and the gun do all the talking worth listening to in Babylon. The left hand literally has no clue what the right hand is doing, and you might as well spit in the wind as attempt to explain the situation. Its the basic memory-centric systems logic of a flock of chickens, which means automation can easily be applied to remedy the situation, but the mathematics required await next generation computers, not to mention, it will require generations of effort, while the governments and corporations attempt to censor you.

However, they failed when both Lao Tzu and Socrates pointed out the error of their ways. I inherited the Socratic tradition from my father, who is my personal hero, and have mastered the fuzzy logic of the Tao Te Ching. Believe it or not, the US government has admitted to having classified a few jokes as “Vital to the National Defense” and hinted that congress is investigating and, of course, they have no comment. For centuries after the execution of Socrates, peasants throughout Europe celebrated the anniversary of his death by drinking toasts to him, recounting his exploits, and inventing new Socratic jokes. Peasants like stupid things like jokes.