This is a companion discussion topic for the original entry at https://level1techs.com/video/level1-news-march-1st-2018-spend-crypto-obtain-barbie-dreamhouse-part-3
Blunderbuss March 1, 2018, 11:02am #2

One thing I noted in the vid No. 2 and going on in this vid No. 3 is there is little build-up/ease-in/intro. You’ve got the usual build-up in No.1, but in the vids 2 and 3 there is not as much to capture attention before you go on to news - and you guys are obviously warmed up, and it is still obviously a cut of a larger video - not a problem by itself, but somehow I’ve found myself expecting each short episode to leave either a more self-contained general impression, or a more on-purpose reference to other short episodes.

Well, at least, that’s me filling in an unsolicited imaginary qualitative query form for the first 3 short episodes hoping the commentary can be translated to something useful.

after watching these videos, youtube started suggesting barbie videos to me. thanks for that.

Can’t wait to talk about that . The algorithm is so dumb. So much dumber than anyone figured. It’s really quite fascinating.

Can’t say I like this new format.
Consider livestreaming it instead.

It feels so incomplete, when it’s split into so many videos. Personally, I dislike the change, but definitely do whatever works, if it increases viewership/revenue. I suppose I could throw a dollar or two yall’s way.

In any case, I enjoy the delivery. Always well spoken.

Level1 is in cahoots with Hasbro (or whoever it is who makes Barbie)!

Anything to say for yourselves, L1? Or are you too busy rolling in that sweet, sweet Barbie cash?

I was watching on my phone and accidentally bumped the “Next video” button on the screen and it started playing a barbie kitchen unboxing video… I’m ashamed to say it took me longer than it should have to realize it wasn’t the L1 video I thought I was watching.

Is the series of vids this week marked as not suitable for kids?
Otherwise I imagine there’d be a sh!t-ton of confused kids, wondering what on earth two bearded dudes are on about…

Think of the Children!

Flippy related:
McDonalds is installing large touchscreens everywhere. That makes the input robot-readable.
I´d say the next time McDonalds modernises (puts in touchscreen V2), they get robots with it. 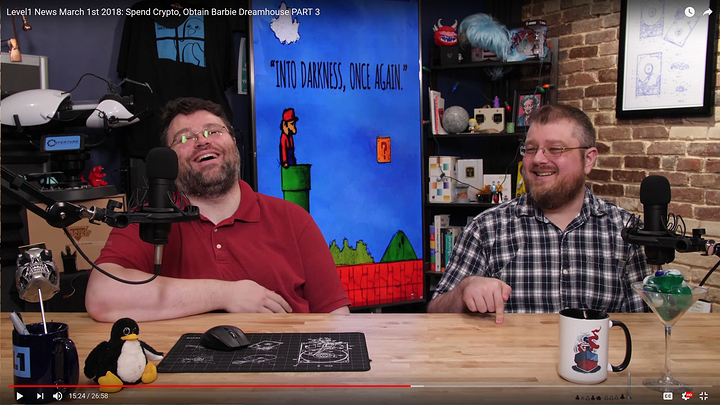 Each of the four videos have lower view count then previous L1 news but together they have 42 600 views which is more then the previous episode. Is this effect what you were after?

As a commenter on YT said… is there a plan to upload the entire uncut video on Saturday?

@wendell if publishing the full length feature film would affect the release of another video… can you leave it unlisted and then stick a link to it in the last video part released?

Already added to the news playlist on yt

Yeah reach is higher. Some folks spent time jumping around the timeline b4. Overall the analytics show way higher engagement esp. when you consider older eps of the news have more time to gather hits. Next week easy the sum will be over 50k

ps… love you, no homo

I am indifferent to the longer segments vs the shorter segments. I enjoy both equally, if I’m being honest

I do miss the tech videos you guys did. I was introduced to L1T by your ZFS 128TB Mega Evil Kreestuh video lol. I also learned about dirs -v commands thanks to you and @ryan – Something I use almost daily now (thank you for that).

Also, quoting the picture below vvv

It may be cheesy, but I do like that you guys are “dressed up” for the shows. I love geek T-Shirts, and I wear them every day to work. But I do feel sort of special when watching the videos, it seems like you guys got all “business casual” to do the show

Really, I know it’s probably because you guys just got off work 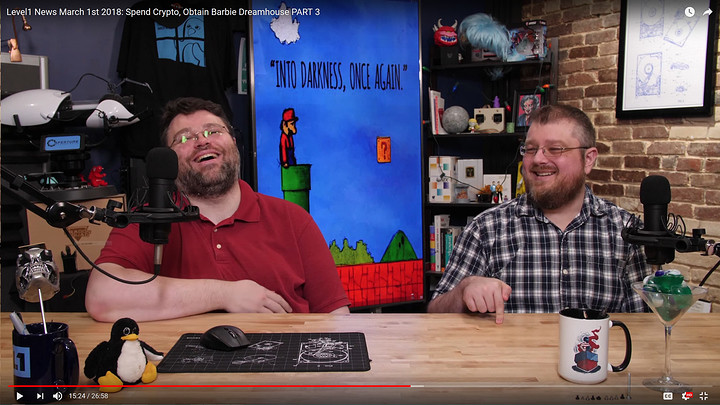