This is a companion discussion topic for the original entry at https://level1techs.com/video/level1-news-august-7-2018-silence-facebook-apps
PendragonUK August 7, 2018, 9:48am #2

The big deal about it not being in the Play Store is that it will be a direct download and users will have to change a security setting on their phone to install. Fortnite in of itself is not a security issue, the fact that millions of users around the world are going to turn off a security feature is. By allowing app installations from other sources the user is increasing a risk of getting software from less scrupulous places. Something normies are not used to and may not be well equipped to deal with assessing the security implications of downloading all of this “Free Stuff”

Opening Pandora’s box is OK for the enlighted, the normies will run into problems…

The most impressive thing about Apple breaking the $1 Trillion market cap, is that they were nearly failing 20 years ago.

I think being in that position at that point in time forced them to change the bread and butter of their business on multiple occasions. They’ve adapted to multiple trends, and marketed (emphasis on the past tense) their products better than anyone. Their tech appeal to people who don’t care about specifications.

From what I’ve read, the banning of Alex Jones was triggered by his threatening to shoot Robert Mueller. If the reporting is correct, he threatened actual murder. In that case, I’m fine with the content being removed.

And you know, people should be critical and all that.

But consider the following: https://i.imgur.com/fWmzUFA.jpg

the removal was both a blessing and a curse.

On one hand, yeah the hateful content is finally taken down. yay.

on the other hand, the average AJ watcher being a conspiracy theorist will only be triggered by this and think “the lizard people are silencing us!, They don’t want to truth out!” mentality. So the removal will only reinforce their own theories and quite possibly grow stronger.

crApple - I found it very funny during the occupy protests just how many of those shits were running around saying woe is me, i can’t get a job, life is hard, i got no money, my degree in euro pansexual nazi studies isn’t working out… while a great many of them had crApple devices. So while saying corporations are complete shit you bought product from a corporation that employs sweat shop labor (which you are supposedly against), everyone should pay their fair share (crApple actively takes advantages of tax law to avoid paying world wide) and creates an inferior product that breaks just so the “genius” bar can tell you to buy a new one (see Rossman’s videos). What what what, are you fuckin nuts?

San Francisco - If you are surrounded by parking lots, parking decks with street parking and no food choices… where the hell do you go? I love how they mention tax breaks for these companies to move in… radical thought, stop using the tax code for your agenda.

I found it very funny during the occupy protests just how many of those shits were running around saying woe is me, i can’t get a job, life is hard, i got no money, my degree in euro pansexual nazi studies isn’t working out

Most popular college majors in the U.S. 2013 | Statistic 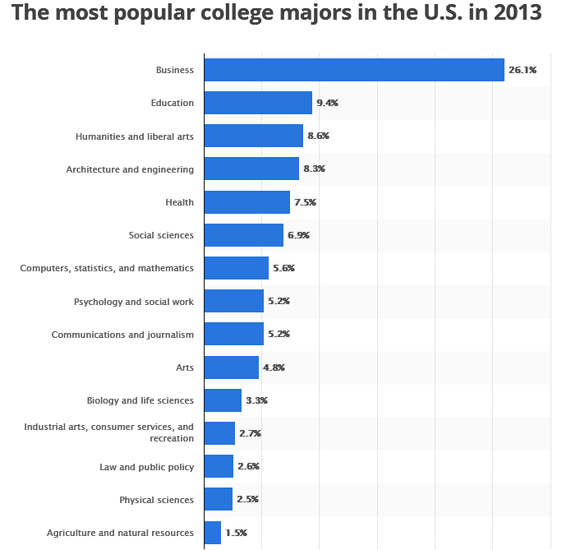 OK, not sure what this has to do with anything but you get a star.