Let's all chuckle at the "Russian" intelligence report

Jimmy Carter went out with more style than Obama does though... not a political assessment, just a style report lol

please spell his name 0/b/@ m- @ or something. they are still allowed to hack us :P

In all seriousness. our current Pr3z is telling us to question our next one. being community social leader that he is. so the fact that tech professional cant even question this before we get in another war with false allegation...

does anyone see the problem? they dont offer any actual proof just (Ip's) so we are just talking their word for it now? esp when we got caught with our pants down hacking other countries? come on...

after you read a few social engineering books, you start noticing what the media is doing. trump did it very well. thats why Hillary lost.

It's not 1986 but the military industrial complex sure wishes it was. Seems to be people are becoming less and less comfortable with bombing third-world countries and killing dozens of civilians in "justified" drone strikes. They're looking for a new boogeyman to stoke fears, Russia may be an oldie but its still a goodie. 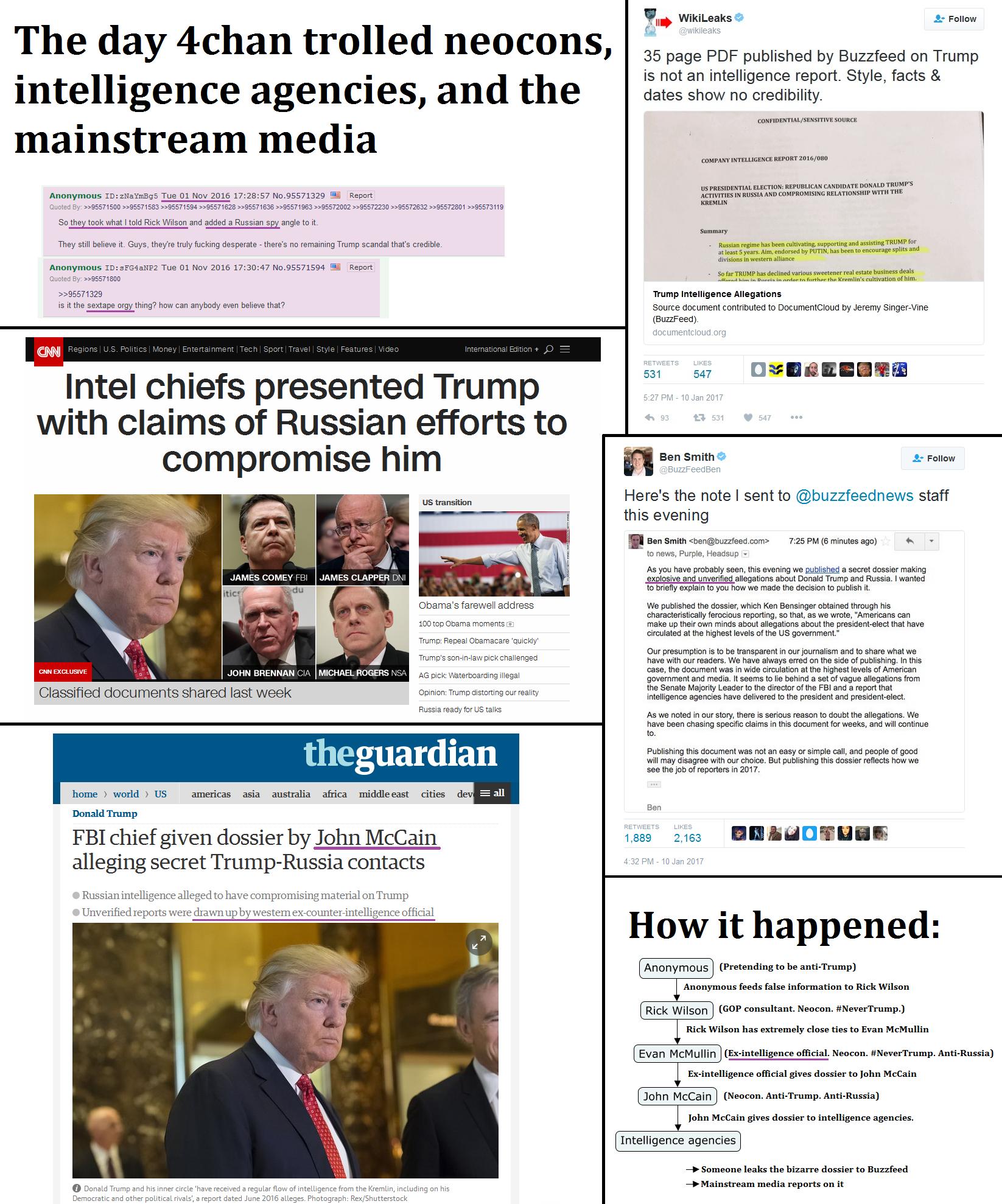 If you don't immediately distrust any motive or claim any current government has to say you're not thinking critically enough.

they dont offer any actual proof

We will never have that kind of proof, and that is it. Not under any government anywhere in the world. It won't happen. Ever in the history. Unless we start a war, and maybe not even then.

I am. But I can not disallow for them being truthful either, because, criticizing everyone else's biases without criticizing my own biases, is not critical thinking. It's an ego trip.

There certainly is doubt, but my personal doubt isn't sufficient to outright disqualify the claims either way.

Also, even the fact that everybody doubts a claim, or is biased to doubt a claim, does not make them right. Copernicus had serious trouble pointing out what circles around what. Shows everyone else was wrong.

I am not trying to get into a debate (wittiest reply wins the audience, any assumption is ok for as long as it rings true, emotional play, etc.), but into an exploratory argument (putting forward what can be known, and what can not be known about the subject, and trying to keep it there).

I know you guys are kind of still all touchy (for a good reason, there's been a lot of touching) and reluctant to weigh in things you have already dismissed a thousand times under emotional pressure during the months that have passed. But I still think we need to go back to point 1? At least on a personal level? At least when no one else is looking? And not getting stuck in motions?

I hope no one is feeling slighted about my intentions at least, even if you should happen to be inclined to go towards points 2 and 3, and/or outright disagree with me.

Because anyone that has ever worked in government knows that their security is a joke. Also it keeps saying Russian made virus. It doesn't show the source code. Which counting on ide or dev, it places their handle on It.

Like I said after the last wars, I'm not so trustworthy. Yes there are bad dudes, but I just don't trust our leaders. That's bad coming from a vet

Unfortunately for everyone, we have to live with them and their choices, and they have to live with themselves and their choices in spite of: impatience, modern environment, failed parenting strategies, low self esteem, groundless sense of entitlement, narcissism, unashamed promotion of self, lack of focus, laziness, and ego boosting by reinforcement of their own biases through social network abuse (some of those social networks I intend to continue visiting, like this one). And we will have to continue living side by side and growing with each other for years to come.

I think you need to step back and take a bigger look at the picture. The 'baby boomers' pretty much fit the exact description also, minus perhaps the apathy ( often misconstrued as laziness). In fact it's only in times of extreme economic poverty or war that a populace becomes grateful for the important things in life. The ability to eat non stale food, drink clean water and have heating in their homes. All generations since WWII have seen a massive improvement in QOL never seen before in human existence on such a large scale
(okay rich folks probably had it good for a lot longer before that ). Entitlement is not a Millennial issue it's a technological advancement side affect.

But I totally understand why you've given up on it and I don't blame you ;) .

So fix the problem by ignoring it or putting your head in the sand. How ironic considering your first rant. What gives you the entitlement to ignore the problem ? Isn't that just as apathetic and lase-fair as you claim Millennials are ? A hypocrite.

So fix the problem by ignoring it or putting your head in the sand.

I do not demand other people to take fights I am taking. Did I put my hand in the sand? I was mostly referring to how much negative energy @ImprovizoR had spent on this forum and how hurtful those debates have been to everyone involved (and yes I do sympathize with the other guys too, and their emotional toll each time actual argumentation went emotional).

I do not think that I am ignoring the problem myself, though. I am in fact asking the questions trying to stimulate this discussion constructively, as opposed to emotionally. Separating what we can and can not actually know. Asking about the role of faith in our everyday sense of (cyber- and state-) security.

I have no defense. Maybe I am. I do not even care about the meaning of that word. This is the negative energy I was talking about. I am not angry with you using that word towards me, but perhaps we just didn't understand each other? My reference to millennials was possibly offensive so offense takes offense, and in some peculiar twist of fate, two wrongs make one right?

If you feel I am being hurtful, please do point it out so I may avoid being so in the future.

I have to say that I think it's hilarious that people think a billionaire with such a long and shady history like Trump could in any way be a benevolent entity. The guy never did anything good for anyone in his life. The faith that some people have in this sociopathic demagogue who cons people out of their money is mind-boggling. And those are the same people who did not AT ALL question the validity of DNC e-mails released by Wikileaks. I find that mentality fascinating.

It's not so much that. I think most people know, but there comes a point where getting shit done for the country and merely just virtue signaling collide. People want change, nobody said the leader has to be a moral compass they just need to steady the ship. All the best leaders in history were morally shady.
Sad ? perhaps, but true.

This is the negative energy

I was merely pointing out that your calling out of millennial behavior is not really a generational thing it has been going on for a long time, the majority of the current problems in the world right now are from a time period where baby boomers have had stewardship of countries for 50 years... how is every problem a 20's somethings issue ?

A millennial mindset won't fix the problem and neither will a boomers. Selfishness and greed don't tend to make a society fair and wholesome... but that''s life for some people they support the idea of survival of the fittest over helping others.

i think this thread has started semi technical to hating on others an specific groups. we need to get back to the informaiton

we need to get back to the dis-informaiton

It's not so much that. I think most people know, but there comes a point where getting shit done for the country and merely just virtue signaling collide. People want change, nobody said the leader has to be a moral compass they just need to steady the ship. All the best leaders in history were morally shady. Sad ? perhaps, but true.

We're talking about a con man, though. It's pretty obvious where con man's loyalties lie. If there's ever been a universal truth to things, it's that con men are in it only for themselves. They literally lie and cheat for a living. And a problem with con men is that they tend to be charming and convincing so people don't know that they're being conned. They prey on people's desires. Most Trump supporters fell for his rhetoric. Maybe they were desperate and maybe they were just stupid. But they fell for it regardless.

And the worst thing is that instead of holding him accountable for his cabinet picks and the fact that he's doing the exact opposite of what he's promised, they keep trying to justify him so they wouldn't have to admit that they've been conned. I just wonder how long that phase is gonna last. It's hilarious.

apparently the hackers used the same burner servers to attack the dnc servers. the team that made the attack is a 10 yr old group.

but then there is various people that stated "the documents came from a insider". we will never know because he wont come forward. *if it actually is a person.

thanks for changing my text lol

We're talking about a con man, though. It's pretty obvious where con man's loyalties lie. If there's ever been a universal truth to things, it's that con men are in it only for themselves

But that is what most people think describes a typical politician.

(btw you can have con-women too, look at Europe )