Let me tell you what it's like having Australian Internet

So, a while back, I had ADSL2 (The horror) I kept thinking to my self "Fuck this is slow as shit" It can load websites and whatnot, when it came to downloading, id find my self on something else while it downloads. Back Track to the start of this year. I got NBN (For those who aint in Australia, NBN, or National Broadband Network, is essentially Australia's version of fast internet) I thought to my self "This is the shit" I could download Black Ops 2 Zombies in 15 Minutes opposed to 3 hours.

Go a while back, I started to notice around 8:30, my internet slows down, I think "This is odd" I try downloading something, slow as hell. Loading up a website, rather slow. Tried playing CS:GO and Battlefield 4, ping all the way to 500. Then I come to the conclusion "Oh great, after 8:30, my super fast internet crawls to speeds slower then ADSL2"

Go back 2 weeks, whenever i tried to go on a website, it would come up with an error on Chrome saying there's no internet, even though I can still so things on steam. I go on youtube on my Ipad, videos wont load for 30 Seconds, most of the time resulting in an error. Then having to refresh it.

So here are, paying $100 a month for internet that shits its self every so often and a router that we cant use out house phone on...

That sounds like cable. With cable, everyone shares the pipe. The more people online at once, the less bandwidth there is for everyone online. That would explain the routine slowdowns. Of course, bandwidth is artificially scarce. With the proper infrastructure, everyone can have a decent connection. Here in the US, peak internet usage time is in the evening. What kind of transmission method is your provider using?

What kind of transmission method is your provider using?

To be honest, I'm not sure

I am getting so fed up with the shit that ISP's are pulling. I have recently started using a VPN on the daily, I used to just use it when I was out of the house, and my experience is night and day, content heavy sites load faster and youtube buffer isn't an issue anymore. It is infuriating to think about how my traffic is getting throttled based off what I am using the internet for and I don't even run any servers out of the house or torrent anything. But what you are dealing with... I have no words...

Edit: and I have a "business" connection to the house

What are the speeds in Australia? I have heard pretty mixed review, people in this site said it is slow, while my Malaysian friend (Malaysia highest speed bandwidth is about 4Mbps, INCONSISTENT) said it is much faster.

What are the speeds in Australia?

Okay, according to steam when I downloading things. ADSL2 downloaded games average 1.2MB/s, highest being 1.4MB/s and lowest being 700KB/s

Okay, according to steam when I downloading things. ADSL2 downloaded games average 1.2MB/s, highest being 1.4MB/s and lowest being 700KB/s

I see, I now understand why my friend said Australian internet being much faster.

I know it likely doesn't matter but have you tried using a vpn? 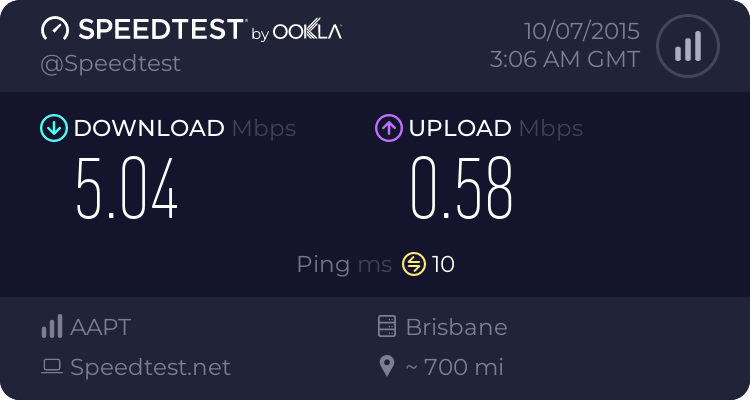 At home its 3x faster.
* when you keep ***holes out of your network with mac filtering.

Not exactly ideal, but I manage in Central Queensland. 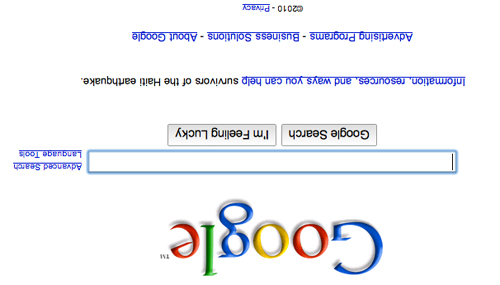 We have NBN at my school. It's worse then at home :/

The trouble in Australia is that we have a heap of NBN providers trying to share the one congested system, and a 'bottleneck' ensues around peak periods after 6pm.

In my area the NBN cable / fibre-link only goes so far, then the rest of the area they have mobile towers set-up to allow NBN customers to access the system.

I'm glad I have never experienced fast internet. I have about 1.2Mbps down and 500KIbps up. Happiness in slavery I guess.

Like everything you have to adjust to life sucking. At least its unlimited I just have to wait. For the Aussies its TPG ADSL2+ Unlimited.$59.90AUD from memory.

ADSL2 (the horror)? My god most of us in Australia can't get those speeds at best. I run 15 down/ 1 up. Although ADSL will always have better response times on ping just lower bandwidth. I get 134 down on my mobile phone, sad to say quicker than the NBN(which I have have worked for laying crap fibre for them just the data cost sucks balls). Do you live in a unit block? as when we installed the NBN to larger blocks they would share their lines like foxtel.

What is the NBN you speak of :). I got nothing yet or in the near future.

The NBN is more like a 'Lassetter's Reef' of lost gold for most Aussies.