I’m trying to make simple program that asks the user “Who shot first?”

b) I need to know how to make the program print a new line after asking the user the question.

Here is what I have so far.

I also just realized that I get this output when entering “Han” It prints both answers when it should only be printing one. 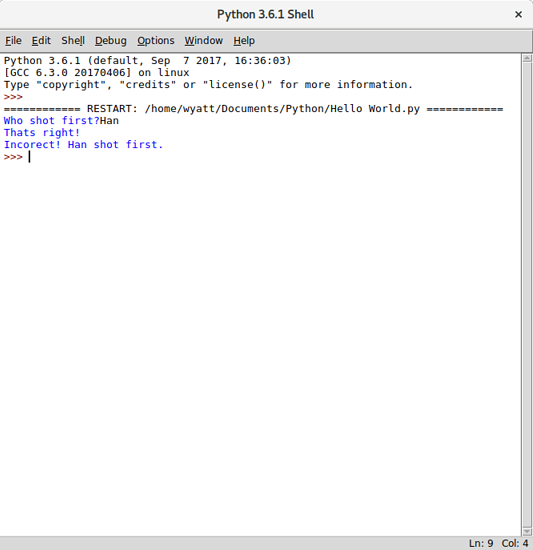 a) make the input string lowercase (make the strings in ifs to be lowercase too), then maybe split it by spaces (to get the words) and check if the word array contains relevant names (edge case if array contains both “han” and “greedo”);

b) add \n (line feed, aka new line) inside the input string.

About your edit, that’s coz you need 2nd if to be elif (aka else if)

Ah, perfect. That fixed both of those issues.

However I’ll have to look up how to make arrays.

All you need to do is use string split function. I don’t recall the exact signature (I barely use python) so check with the reference and docs.

As for actual arrays pretty sure you can just use lists. (Does vanilla python even has static arrays?

Wait, you might not even need to split. Python must have something along the lines string.contains('han')I bet it does.

This is what I’ve come up with.

It seems to work.

you can use lower() to shorten your lists and account for capitalization errors:

You don’t have to split it, but if you did, you could use:

or you could use the generator using the input string itself