The latest Guardian leaks via Edward Snowden revealed another unexpected, yet inevitable truth. In fact two truths, the first being:

"The phone, internet and email records of UK citizens not suspected of any wrongdoing have been analysed and stored by America's National Security Agency under a secret deal that was approved by British intelligence officials, according to documents from the whistleblower Edward Snowden."

This counters the 1946 UKUSA Agreement, covering the allegiance of operations know as Five Eyes. Its law explicitly states that member agencies are prevented from spying on on other member state citizens.

In 2007, a ridiculous one-way "deal"  (if you want to call it that) was struck between British and US governments that allowed for the US to spy on British citizens. It completely ignored the 1946 UKUSA Agreement that explicitly prevents this.

The second truth that was revealed was despite this agreement, and ignoring the 2007 deal that was made between the US and UK, the NSA and US still conducted mass surveillance of British citizens without notification or consent of the British government:

"A separate draft memo, marked top-secret and dated from 2005, reveals a proposed NSA procedure for spying on the citizens of the UK and other Five-Eyes nations, even where the partner government has explicitly denied the US permission to do so. The memo makes clear that partner countries must not be informed about this surveillance, or even the procedure itself."

An extract of the memo: 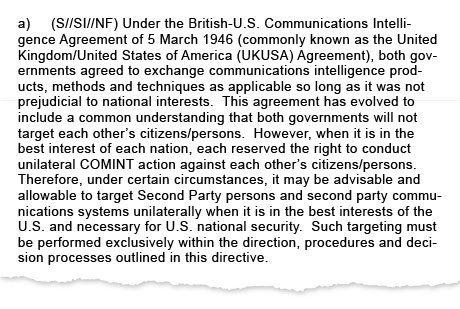 It was confirmed in the recent leaks that the NSA deemed it "necessary" in the name of national security to spy on British citizens, or any other member state for that matter. Any results were classed as NOFORN, meaning no foreigner. They were kept strictly within the NSA for US eyes only.

And a nice piece from Channel 4 who performed the investigation alongside the Guardian.