Finally received my FW900 from Ebay, The box was packed extremely well with a thick barrier of bubble wrap around it. The monitor bezel has a scratch...

and got to wondering about actually latency on OLEDs. I Also remember thinking this video would have been cool with a Sony FW900. Depending on circumstance i have an SGI badged FW900 i could lend. regardless it would be cool to see a review with some more CRT to LCD / OLED action and maybe toss in the infamous delock DP to VGA adapter and or one of the new Sunix adapters that supposedly do decent.

would be nice to see adapters have any perceivable latency.

i want the black OEM version of this crt real bad

i wasn’t aware there was black version? i got the SGI version because i though it was Dark Grey but, it’s not. the Sony fw900 is silver bezel with black casing.

I would take a semi educated guess and say that a large part of the latency in modern panels is not just in the OLED’s but in the display driver chips that take the input signal (HDMI/DisplayPort) decode it and transform to display on the panel buffer.

Older VGA Monitors use a very direct analog way of displaying images with most of the signal logic being done on the Graphics card. So with a CRT you’re only limited by how fast you can feed the BEAM with the sequential RGB pixel stream in sync with the VGA vertical & horizontal clock.

A LCD/LED panel is a big piece of optical memory.
The display driver can write into it like any other memory location

EDIT: Man I should really make a top down diagram of all the stages in for a image to go from memory buffer on display card to output on a monitor.

fun fact: you could support high bit depth color way easier on CRTs because all you had to do was drive them less.

My emac can go to 260hz if that gives you a frame of reference and that was NORMAL shit.

I remember reading about the first counter strike tournament that was officially held. No one could hit anything because it was on the new expensive bullshit 25hz LCD’s that came out.

some folks are driving the RAMDAC on the new Sunix active adapter units past 400mhz supposedly.

I would like to get my hands on a variety of DisplayPort to RGB adapters to do some proper lag testing for CRTs on modern 10xx series graphics cards. I’m going to order one of those Sunix adapters when I get the chance.

All I’ve got right now are some cheap no-name adapters that seem to have at least a few frames of lag at 150Hz. I mean, they seem to do fine with my level of play in CS:GO but having one display hooked up to the RGB output of a 980ti and the second display mirrored on the DP adaptor reveals some lag. 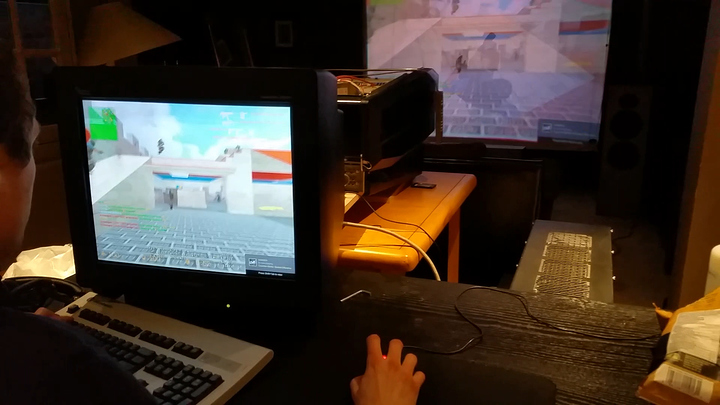 Here is a PM i got on NBR forums, i found it helpful.

just an update on the subject. I was not following the FW900 thread for a few months, I completely missed one really really important update!

There is an adapter on the market nowadays, that can apparently go way above 400MHz. Some units were confirmed to work even above 500MHz and even 649MHz it seems… That’s absolutely insane, and definately way enough for almost anything one might want to throw at a FW900 CRT, including insane interlaced resolutions.

Or the yet untested EU version from Delock, the 87685.

I just bought the Sunix DPU3000-D3 on Amazon myself, with the -30% discount, and I’ll probably also get the Delock soon to give it a try, since no one tried it yet. The Delock is like almost twice the price though. Not nice at all. But it seems to come with all cable options, MiniDP, DP, and optional USB power.

It has no input lag as far as we know, someone from Hardforum ran some tests on the Sunix to confirm that.

Both Delock and Sunix are based on the same chip, so it should technically perform the same. It might also depend on the quality of the chip, we don’t know yet, there are not enough people who tested this adapter at high bandwitdhs, but so far we had incredible results.