Hi there guys, so a bit of a sad story for me today. My little brother finally saved up enough money after over a year of odd jobs, birthday, and holiday money and purchased a used gaming laptop for $500 CAD. All seemed well, it is a newer model dell inspirion 7000 gaming, with a 7th gen intel cpu and gtx 1050. He was absolutely ecstatic with it, having seen all his hard work paying off. After about a week, however, it started randomly shutting down. So we had it brought in to Memory Express (Canadian pc store chain) for some diagnosis. It wasn’t overheating, and the battery was good. After about a week of the tech trying different power supplies and bioses, he determined that the issue was the motherboard. Replacement boards are around $1000 CAD, so thats not an option. So i’m thinking of removing the motherboard and tossing it into the oven to see if that helps. My question is, is this even viable? As the gpu and cpu are not removeable? And should i be removing the heatsinks and thermal paste before baking it? Is it better to use a hair dryer or something instead? Thanks guys.

I’ve also made a gofundme to try and get my little brother some money back, if anyone donates I will drop some steam keys in the comments. Thanks again everyone <3 gofundme . com / f / helpingmylittlebro

I recommend investing in an optiplex and a cheap gpu

You should not bake any hardware ever.

What about asking Louis Rossman or other really talented repairers to help you fix that machine? I don’t mean to judge or anything but overall the random go found me campaigns and alike are not really well seen by “the internet”.

Return it to the seller because it’s defective?

Send the board to me. I can attempt to fix it. If you pay shipping, I won’t charge you anything. I’m in the United States. Utah, to be specific.

THATS AN OLD ASS MYTH YOU WILL BEND THE BOARD.

Its more than likely some cold solder joints, yes, but that doesn’t mean flex the whole damn board.

Is there a schematic around? Ask dell.

so i work for a place that among other things is a repair shop, and a cheap laptop board for 1k does not seem likely or reasonable. what board is it exactly? part number and all that shit. quick google search finds a similar 7000 series board for 75$ but its probably the wrong board.

and even if the board is prohibitively expensive for some bs reason their is always doner boards. a board pulled form a system with say a dead screen bought cheap off ebay or what have you. 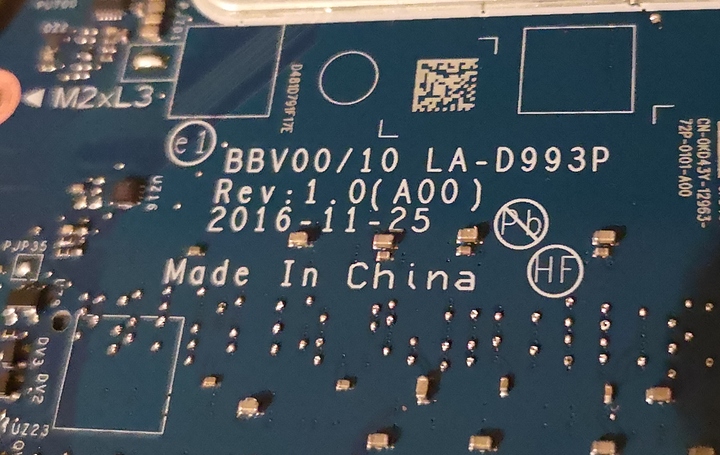 you are right the soldered on cpu/gpu drive up the price. if you could find the same laptop somewhere with a broken screen or keyboard or whatever you could swap the board on the cheap.