Kill Your Console with used components

I do really think that Logan should do an episode where he recommends a build from ebay's buy-it-now prices for something to kill your console with. I just recently did such a build, because I am poor and it was the only way for me to get something sufficiently powerful to play with.

fans cost about $40, but those were a gift, so you needn't spend that much to buy some serviceable fans.

I've not had a chance to test this rig out on many of the typically crushing computer titles, but I will be doing so in the near future. Currently I've been playing a HEAVILY modified version of Dark souls with the full HD pack and SweetFX at full 1080p. It is beautiful and rarely now dips below 30 fps (which is the rendering cap unless adjusted in DSFix, Doing so may cause instability.) Unfortunately, I've found that my card is not stable at a forced overclock, although the BIOS which is loaded has alternate boost clocks at 950 MHz and memory clocks at 1450 MHz, so all is well.

If all you must have is something that will replace your console, you can't go wrong with an inexpensive build like this. Just make sure that you buy from reputable sellers; and if the price looks too good to be true, it is. 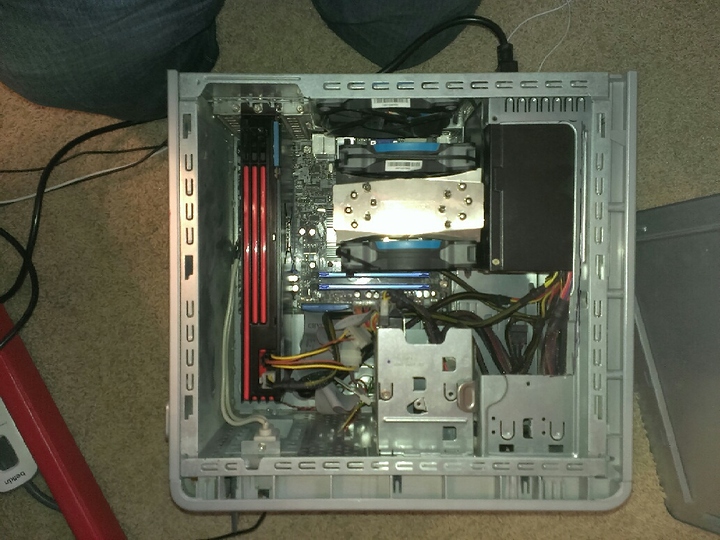 Note the preposterous size of that graphics card compared to the remainder of the build. And yes, you eagle-eyed forum scrollers, that is an IDE/PATA ribbon cable. I carried this HDD over from the system that was previously in this case. Because I can get data transfer speeds of about 30 Mb/s I'm still a bit loath to replace it. There is a tiny bit of PCB visible on the Radeon HD 6950 just below the Crossfire connector. This is the BIOS switch and is a vital part of the unlocking process (the cards frequently refuse to overwrite the BIOS that they are currently running on, so you boot into one BIOS and then you switch the BIOS while the machine is running and overwrite the other one.)

There is only maybe a 1mm gap between the Thermalright True 120mm cooler and the PSU. The bit of black that you see between them is a fan cable that I have been forced to sandwich between the two. On the plus side, it does prevent contact.

Then the graphics card in question: 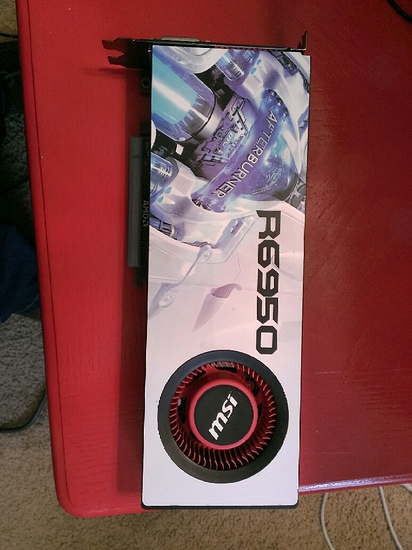 I do find the sticker to be a bit garish, but as you can see in the other picture, it isn't as though I can see it clearly. I will be popping off the cooler and either painting the red accents to blue, or using a vinyl sticker to cover them. The fan can be red, it honestly doesn't matter, since I can't see it. Also, to anyone looking at just this same card from MSI: this thing is seriously heavy. It has a 1-2 mm thick backplate on it. Although this provides astonishing rigidity, it does add quite a bit of heft to the card. It also adds an additional few steps to the disassembly process that I have in the works.

So; the disassembly of that GPU is really a pain, and because nobody saw this post at all, I didn't take pictures of any of it. So sad for you. This GPU cooler was stuck on with a ton of screws, and the seller had attempted to boost the performance of the thermal solution with some Arctic Silver 5 that he slapped on there. It wasn't a good attempt. Take this as a warning, test your products as soon as they arrive, and be prepared to replace the thermal paste, at a minimum. I actually replaced it with Antec Formula 7. Why did I choose this over, say, Arctic Silver 5? Because the die is exposed on the GPU, and certain components like RAM, VRMs and anything nearby will be exposed to the thermal paste (you can actually buy replacement strips of thermal pads, but I find a high-gap compliant thermal paste works a charm.) The reason for going with Formula 7 is because it rates quite nicely even compared with Arctic Silver, and it is not electrically conductive. I've also tried varying methods of application for the thermal paste on this one, and I've found that the best method is a modified x-method. You put the x on the die, a thin line of paste about 2mm from one corner to the same distance on the other, go from the center to the other corners, then make a dot equidistant between the two points on each side. This pattern fills the die surface completely and very, very evenly. The primary reason for the modification on this: there is no heat spreader and the die is quite large, so full coverage is important.

Okay, so I downloaded and installed a few new games. I'm going to be giving my objective opinion about the playability of them, because to be honest, if I can't notice the difference between 30 and 33 fps, it isn't going to make a real-world difference. Also because I couldn't be bothered to download a frame counter, or do multiple play throughs of a section with different graphics settings.

Crysis 3: I'm playing this with most of the settings at high, with low filters. On my 32" 1080p television, this game is absolutely beautiful. The rain of the first area is definitely a GPU killer, and it drops performance like a rock. However; set at high, instead of ultra, with motion blur off and filters on low, the GPU churns out a reliable frame rate to give you adequately smooth playback. Inside, the frame rate jumps back up to a more reasonable rate, at least above thirty. I suspect that once you get out of the rain entirely, this game would return about 30 fps on this system with the settings turned up to ultra.

Borderlands 2: turn PhysX to low if you don't want to explode your CPU, turn everything but the filters up to max and enjoy the show. Frame rates are always above thirty, and gameplay is buttery-smooth.

DMC: I haven't done much of a playthough of this game on this system, but the framerates are nice, and on my display which does a lot of adaptive sharpening on its own, this game looks even better than usual.

Dark Souls: This game, stock, is really still very pretty. On top of that, the system requirements aren't that high. It plays at around 60 fps continually. Add in mods like the high-res everything and that drops closer to 30 fps. This game does not tolerate software overclocks of the GPU, so don't even bother. But damn is it pretty.

If anyone has any games that I can either try for free, or that aren't very expensive, please let me know.

I haven't really noticed any bottlenecking, to be honest. Although it may be that I am unaware of it. It is MUCH faster than it was before. Before, I was running a E8200 with a GTX 650. They were trading off who was bottlenecking whom. I do at least have the FSB running at 1333 MHz, which is the fastest that my motherboard claims to support, also how I got the clock speed that I have. I may try pushing it further later on, but I'm pretty content right now. Also, the only reason I'm using a Q6600 at all is because I already had the motherboard, it was coming to me for free, and I couldn't afford to purchase a new graphics card and a new motherboard and processor.

Also, would you like to know what it actually bottlenecking my graphics card? PCI-e 1.

Nice console killer. Great for what you paid. Would make a great addition to the Folding team!

My utilities bill couldn't afford that, but thanks. I was amazed at how well this card performed with Kombustor, even when it's having to run PhysX through the CPU.

Has anyone else noticed that updating your thread doesn't return it to the top of the feed? I think that needs to be fixed.

This is a nice little build. Good enough to kill most consoles. I'm currently using an E8200 with a Palit 9800GT 512MB card, 3GB of DDR2 800Mhz RAM(you read that right) and can play some games such as Arkham Origins at 1080p with low settings and Far Cry 3 at 900p with low. Can't play anything too modern though, Crysis 3 won't even run because the requirements are quite high. My rig is starting to show its age. I might go in for something like this since I can't afford to spend much either. Thanks for the share.

It does I think?!

You're very welcome. I would probably suggest to upgrade your motherboard, CPU, RAM and GPU. It would be fairly expensive, but worthwhile. I recommend this primarily because of the price of large kits of DDR2 RAM. an 8 GB kit of 800 MHz RAM is about the same price as the CPU and motherboard together.