So, the thread has its own idea which I guess should be followed

I want to pick your brains! Share anything you find interesting broadly related to science and engineering that others might not know about. (Computer science, mathematics, physics, chemistry, biology, material science, geology, metrology, meteorology …) Write the name of the topic on the top of the comment and at least one link below with a short description. Credit to @metamachine @Aremis and a few others who gave me the idea with this and this thread. Feel free to add interesting links, videos and such. Example: Reversible computing still heavily in research, promises much higher density and more efficient circuits Wikipedia: Reversible computing Fundamentals of reversible computing A Quantum Fredkin Gate The von Neumann-Landauer principle fundamentally limits the possible density of processors and logic gates because of the fundamental entropy change in no reversible bit operations. Reversible logic does not need power on a fundamental level. keywords: Fredkin Gates physical reversability adiabatic circuits

and is this kind of shit okay? 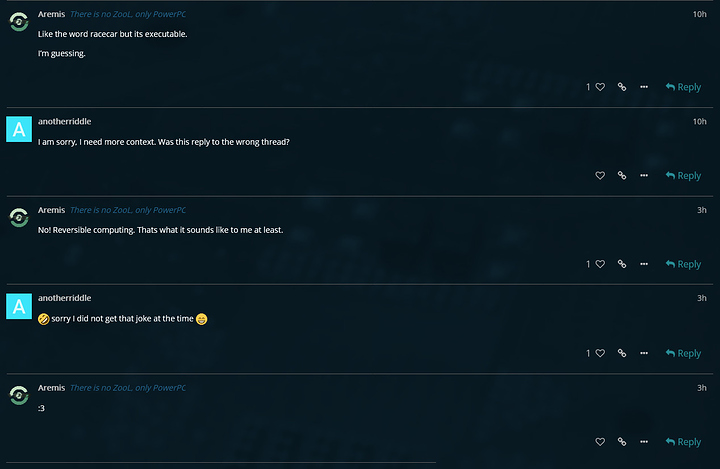 because for me at least thats the most bottom level garbage, and I’m wondering if its just me, or do humans really like this kind of shit, as sometimes I’m getting irritated irl too by this shit what I think is called small talk? But people do that, so they must enjoy doing it, right?

SO, whole point of this maybe slightly odd blog thing, is to help me understand, that if that picture up there is completely fine and wanted thing to have, or if its something I should report?

It’s up to the person that started the thread. If they feel that it’s getting too off-topic, and people aren’t staying on track after they’ve asked them to, then sure.

But the OP of the thread was involved in that, so we really wouldn’t do anything about it unless they themselves complained, or the thread got so out of hand we felt like it needed to be calmed down.

If things are off topic, you can flag it.

But it just appears as if there was a misunderstanding that was cleared up. I don’t believe the rest of the thread would continue like that. But if it did, the flag would help the thread get back on track.

Realistically I think the thread will right itself.

I would be okay with a
[Serious] What is something cool (that is probably little known) that you learned and were surprised by lately? Bonus points for your field of expertise.

If OP is lollygagging feel free to fork a thread. discourse has great features for forking and merging threads. no shame in that.

well and I like the idea of its your thread, you can eject whatever you like… but they’re free to fork it too. Works fine.

Oh nooooo, I’m sorry we can’t just write pure math to a magnetic tape and dump the output for you.

Jesus fuck, I wanted to make an obvious joke on a technology I’d never heard of wtf is wrong with you.

wtf is wrong with you.

Calm down their bro.

Everything is all good. No need to escalate anything.

In general I would prefer if people just post more interesting stuff and thereby drown out the chatter. It just looks kind of bad, because at the moment there are only two posts of the type that I intended for this thread. Thanks for your concern.

Edit: MasterNurmi @Phantom @Goalkeeper I would like to invite everyone over to my thread if you are interested. I am sure everyone knows about something that someone else doesn’t. Even if you think someone might know about that already, please post it, we have all different fields of expertise.

In general I would prefer if people just post more interesting stuff and therby drown out the chatter.

It helps to also foster that kind of activity yourself. It’s one of the reasons I’m such a seasonal poster. It takes way more time to make shit like that, or to sort out something reasonably cogent, and most people just don’t have time for that.

Not like a post you made is bad, but what Nurmi is saying isn’t entirely off either. It’s that problem of the amount of time it takes to structure and hone in on a proper idea that isn’t so broad and nebulous that it feels pointless.

Doesn’t mean it shouldn’t exist. The lounge does, but if the goal is more substantive content it’s going to be up to the people that care to dedicate some time to actually doing things like that, and it’s understandable if that kind of posting is rarer than a shit post.

And I don’t even dislike shit posts (or chatter as you put it.) Or your thread. I just got other things to do so I save it for linux related posts that I can add to or go to the lounge.

Another idea: I could make a
[Post any interesting sciency stuff] - discussion thread
where all the discussion and chatter can go. What do you think about that option? @Leon_the_Loner @Goalkeeper @Phantom @anon25377527

I wasn’t asking that. I’m just throwing my two cents into the mix. There’s a lot stupider shit that has been posted here man. MUUUUCH worse.

I agree it would be more engaging if thread quality is well maintained… Actually if we could maintain the contexts in topics that would be great then…
Either by updating in same post with update heading/marker… or adding hashtags like #computerscience, #maths on top of new posts…

I agree it would be more engaging if thread quality is well maintained… Actually if we could maintain the contexts in topics that would be great then…
Either by updating in same post with update heading/marker… or adding hashtags like #computerscience, #maths on top of new posts…

It’s good… I think title is fine… content in it is what matters.

I’m not exactly sure I know what you mean.