Just wondering how you do your data and my future data plans in theory (cloud vs NAS, and sharing to family may be)

I’m very slowly testing a new data routine - in the past it’s been pretty easy, I just stuck with what worked for me:

Dropbox - live and accessed/modified (work and play related) as well as camera upload.
GDrive - archive but quickly accessible on all devices
Windows PC - Long term, only used for storage and emergency workstation, backed up with BackBlaze.

NextCloud - Short/Long Term, doing what Dropbox/GDrive used to do (hosted on my TrueNAS “server”)
TrueNAS - Long term with plex involvement

I’ve only been testing NextCloud for a few days so far, very impressed. I’ve been testing TrueNAS for a year now, incredible system.

Something I’m a bit cloudy on (ha), is how I’m going to arrange photos. NextCloud’s immediate phone sync seems pretty good (only tested for screenshots, not proper photos). A downer is that my Samsung TV (not that old, perhaps 2017’ish) doesn’t have a NextCloud app…interestingly though it does do SyncThing. I played with it a while back and found it a little complex, although I did get it working I had other time commitments at the time and could apply the effort needed.

I have been demo’ing Plex for media viewing, in part because it works so well on my TV. I’m still trying to optimise the install, there are plenty of guides that I haven’t quite got the hang of, but I’m generally happy with it, on TV, computer or mobile phone.

A side thought is that my parents could do with a better TV system (they still have VHS player and a 10 year TV box), and admitted it as well. I would also really like to share things easier, at the moment I send them videos via a YouTube link, which I send to my mum’s mobile phone. Thing is, my dad is quite badly disabled and so she shows it to him on a tiny screen. My theory is to buy them an Nvidia Shield (not Pro) and then add Plex and share my account with them, so they can see anything I do, almost instantly. I’ve got the Nvidia Shield Pro and it’s a neat little machine, something that’s really good is that it can/has accepted streams from outside the LAN it’s connected to (when I had my TrueNAS in my office off-site), I’m hoping that the same can be said about the standard Shield.

Shield Remote: Something that concerns me is my dad using the control, it’s a tiny little thing and he has limited hand mobility. I wonder if there’s a solution to this?

WHY AM I BACKING AWAY FROM DROPBOX/G DRIVE?

It’s not a privacy thing, I have too many other greater concerns going on day to day - when you can be called upon at any time of day or night because my dad’s fallen down and I need to pick him up, what info the big companies are scraping from my data is of little concern. I know this can be a concern for others, and I know they’re justified.

What gets me is how the services are slowly being raked in - dropbox has been cutting down what the free accounts get to do, which is understandable from some perspectives. I used to be able to login to almost unlimited devices, now it’s down to 3. Camera upload seems more likely to work when I open the Dropbox app on my phone, before it did it as soon as it sniffed wifi.

Likewise GDrive, they took away camera uploads so far as I know, so I’m just thinking of preventative solutions before they both give up…I guess I’ll save some money though, instead of paying for GDrive’s business with 1TB storage, I could just get the email only version once I’ve migrated.

Anyway, welcome any comments on my mumblings!

Forgot to mention, I have 20GB of storage with my Dropbox account, mainly via referrals when I first started using it. I teeter on the edge of this constantly, normally anywhere between 15-18GB…and that’s getting quite annoying!

This is the sort of thing I’m getting from Dropbox, the very second I go over 80% usage. Just look at the subject heading!!! 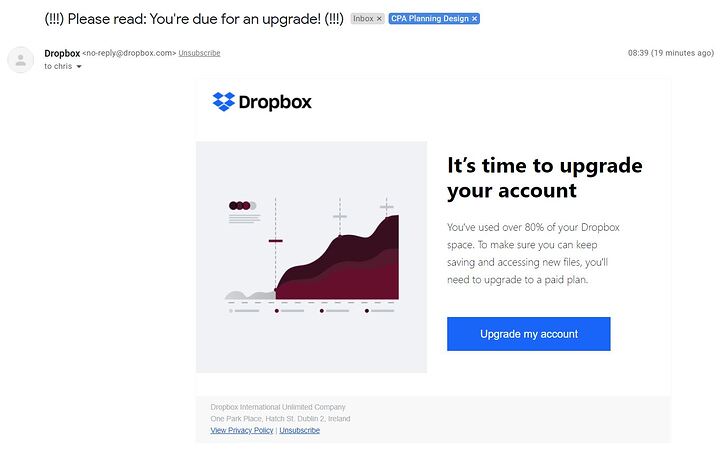