Hey guys I've just installed ubuntu 16.10 and quite a lot has changed since the last time I used it (10.10 - 12.10) So I kind need help, first with my GPU drivers... HD7870 I can't find them with Additional Driver and I can't find them from the AMD website, is there a different way to install them, through terminal or idk... never been so much into that thing... and also where are all of the Ubuntu Software Center... now only Ubuntu Software programs ? It looks like there are only 20 programs... I don't see anything else... I have to go and download things like Skype, Steam etc... manually... like windows... it's just... it wasn't like that the last time I used it... why did they f***ed it up so bad ?

fglrx is not maintained because AMD now has moved to KMS drivers instead of binary blobs. Jockey will therefore not show fglrx.
The minimum requirement for AMD's KMS driver for GCN 1.0 is kernel 4.9. You will not find that kernel anywhere in the entire Ubuntu family.
If you would install any modern bleeding edge distro though, you would not only get a higher software quality than from a non-matured-LTS version of Ubuntu, you would also get kernel 4.9.
If you need a very simple solution, I would recommend Manjaro. Because of the mhwd, the use of a GCN 1.0 card with kernel 4.9 is pretty painless, all you do is set the kernel and it should do everything automatically.

the standard ubuntu software app is garbage and never worked

I feel like I will be leaving Ubuntu, maybe will try out Manjaro, but I'm not sure yet... Ubuntu was much user friendlier back in the day and now it's just... Disappointing...

and now it's just... Disappointing...

Ubuntu is what I consider to be the harder distro now. You have to search for drivers, hand build the kernel, managee kernel mods basically on the fly, and roll out the OS yourself. I personally prefer Arch as you just build it yourself and do it all of once or twice. Nothing major and it teaches you OS design.

I enjoy ubuntu because I like doing maintenance. I enjoy arch because of the low level customization. Its all pretty great to be completely honest. The only problem is that now if you want anything in gaming you have to have the newest kernel. The easy-OS people are kinda pissed about it as with arch users like me we have been waiting for this shit for YEARS. Its exciting on many levels.

antergos arch is very friendly. i installed arch first then tried both manjaro and antergos. with antergos you get the choice for 6 different UI's and with gnome you get a "app store". you will like it much more than ubuntu. somethings of course with arch you have to configure but its not that hard

I don't mean to hijack this thread, but what is the name of this new binary blob? I am running just plain Arch, not Manjaro or Antergos, and I can't seem to find it.

binary blob? you lost me

There is no binary blob in the kernel any more. AMD now uses a KMS driver like Intel or like radion. It's called AMDGPU. This code is of course open source because kernel KMS module. This module then works with an optional binary in userspace for proprietary extended functionality, for instance particular GPU calls in proprietary AMD optimized games, or with Vulkan calls. There is no more binary blob that needs to be compiled in the kernel.

Well... Later on I will try Arch Linux or Manjaro, ubuntu is not a thing anymore for me... I think I'm whining way too much about it but the only reason I switched back to windows was gaming... and now more and more games are available for Linux... I'm just sad about ubuntu...

Edit: Which one would you recommend me ? Arch Linux or Manjaro... I really have no idea with which one to go right now... Probably the Manjaro ?

Later on I will try Arch Linux or Manjaro

I would advocate for Manjaro - it is still Arch - but it has it's own testing and stable branches. It's leading edge, not bleeding edge.
I enjoy it for a good month now, and so far the devs made a great job of pushing weekly upgrades (or earlier if bugs were found) and keep the upgrades stable as much as I can wish.

Antegros - is, at least for me, to close to arch and it's biggest downside - the bleeding edge - and resulting instabilities and breakages. (my opinion, no poking or such) 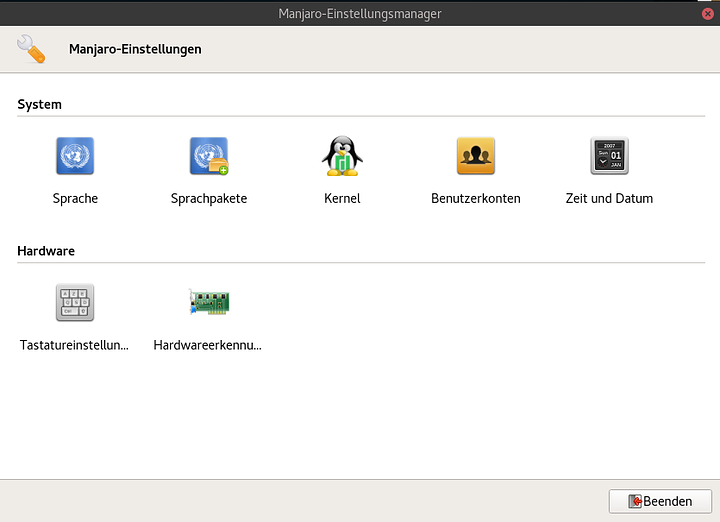 Thanks, Manjaro is it then... Maybe finally I will get the same Linux feel I got last time... Stable and working without much outside help

Thanks again to everyone :)

Only been on Linux for a few months and I started on Mint18 (cinnamon),, I'm currently testing Manjaro (KDE) in a VM as I tried out KDE Neon and really loved the KDE DE,, I use my PC to run a business but I also game and I like the idea of the rolling release that Arch offers.. I'll likely go to a full install of Manjaro KDE as soon as work breaks up for the year, Not that Mint or Ubuntu has been bad at all it has worked "Mint" me and achieved my goal of getting away from Win I just feel like I want a little more out of my distro/DE.